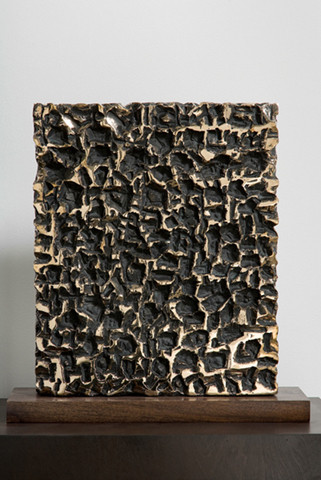 David Kordansky Gallery is pleased to present Anthony Pearson’s first solo exhibition in Los Angeles. The opening reception will be held on Saturday, December 15th from 6 to 9pm, and the exhibition will be on view through February 2nd, 2008. Anthony Pearson works in photography and sculpture, employing the latter to illuminate and confound the concerns of his photographic work.
Pearson’s bronze sculptures and silver gelatin prints are displayed together in what he terms “arrangements.” Here, bas-reliefs and frontal “slabs” stand in relationship to the photographs. A formal elegance reigns as the contemplative interaction of wall and plinth achieves a museological effect. The copper alloy of the sculpture accords with the photographic silver, highlighting the alchemical impulses of Pearson’s oeuvre.
His solarized silver gelatin prints derive from a multi-stage operation that sees the artist paint, cut, stencil, peel, and burn away layers of foil and paper upon a concrete surface. Photographs taken over the course of this process are subjected to the darkroom technique called solarization. The resulting pictures are exhibited out of order to dissolve any semblance of linear transformation. In contrast to photographers like Thomas Demand or Vik Muniz, who construct realistic representations within the photographic frame, Pearson surveys the growth, transformation, and eventual destruction of his decisively abstract constructions.
Methods of mediation appear throughout the work as Pearson endeavors to wrench the imagery of his subject from its source. Lens flare, a feature customarily regarded as an obstruction, comprises the very subject of some of his photographs. He also employs visual interferences associated with over-exposure and artifacting, a digital flaw that occurs during the process of data compression. Pearson’s large acrylic mounted prints are hung low to the floor and reflect the ground, thereby further obscuring the image and emphasizing the object-hood of the work.
Pearson’s working methods reference outmoded analog and modernist practices (there are echoes of Man Ray and Laszlo Moholy Nagy in Pearson’s mechanical play), but they constitute far more than mere postmodern quotation or nostalgic tinkering. He registers digital parallels to analog manipulations, forging a pact between photography’s early history and modern computer-based developments. In doing so, the work maintains a consistent relationship between image and media.
By granting room for authorship at the level of molds, negatives and digital data compression, Pearson subverts the uniformity associated with methods of reproduction. He eschews the use of editions; each photograph is afforded a unique life and becomes a critical player in a larger piece. The result is a body of work that simultaneously reaches beyond photography and deeply within it to its core materiality, its history and its contemporary presence as a digital medium.
Anthony Pearson has exhibited at Shane Campbell Gallery, Chicago, IL (2007, 2006) and the Museum of Contemporary Art Detroit, Detroit. MI (2007). He is featured in a two-person exhibition with William J. O’Brian at Marianne Boesky Gallery, New York until December 8th, 2007. A solo exhibition of Pearson’s work will take place at Midway Contemporary Art in Minneapolis, Minnesota in 2008. Anthony Pearson received his MFA from UCLA in 1999. He lives and works in Los Angeles.
www.davidkordanskygallery.com