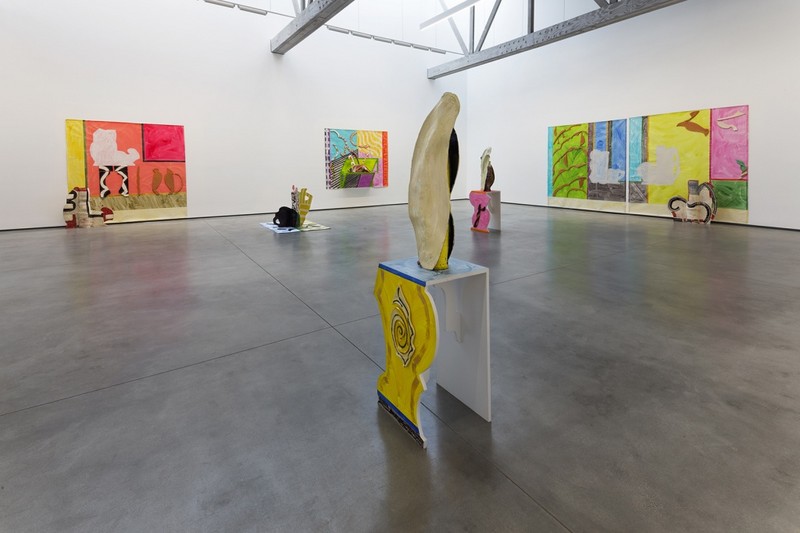 David Kordansky Gallery is pleased to announce Illusions of Domesticity, an exhibition of new work by Betty Woodman. The exhibition will open on Saturday, January 31, 2015 at 5130 W. Edgewood Place and will continue on view through March 21, 2015. An opening reception will be held on January 31 from 6:00pm until 8:00pm.

Legendary artist Betty Woodman is widely celebrated for her exuberant and vivid ceramic works that defy categorization as painting, sculpture, or pottery. Her singular experimentation with the vase form, as a contemplative and pictorial, as well as functional object, spans over fifty years—from producing utilitarian pots in the 1950s, to collaborations with the Pattern and Decoration movement in the late 1970s and 1980s, to her 2006 exhibition at New York’s Metropolitan Museum of Art, the institution’s first (and only) for a living artist working in ceramics, and its first (and only) retrospective for a living woman artist. In her recent mixed-media sculptures and installations, Woodman revisits the history of ceramics as a tradition of painted form, generating spectacular possibilities for the extension of painting into plastic space.

Illusions of Domesticity, Woodman’s first exhibition at David Kordansky Gallery and her first on the West Coast in nearly a decade, features an installation of new paintings and sculpture in glazed earthenware, unstretched canvas, and wood. In these polychrome reliefs and freestanding forms, she conjures the trappings of a bourgeois home as splendorous perceptual experiences. Woodman has long drawn inspiration from domestic Roman wall paintings, whose tromp l’oeil depictions of outdoor vistas accent lived space with pictorial depth. Here she furthers and inverts those dynamics, elaborating sculptural objects with painted imagery, but also vice versa. Picturing, if not mimicking rugs and tables, pedestaled vessels, and room interiors, the works elude expectations, shifting both between materials and modes of representation.

In each of a new series of still life paintings, for example, a depicted table partially emerges from the picture plane as a shelf-like protrusion. Atop these tables Woodman situates decorative dinnerware and pottery of her own making by placing these forms on the shelf and collaging others to the surface of the painting in bas-relief. As painted background becomes sculptural base, and image becomes object, and back again, the resulting picture appears at once continuous and discontinuous, immediately present yet illusory. The idiosyncrasies of a Cezanne-like perspective, a vibrant palette reminiscent of Gauguin, and patterning in the spirit of Matisse further activates the painterly, tactile sensations at play.

These optics become increasingly bodily in Woodman’s freestanding works, in particular her Aztec vases. She adorns each thrown, tubular pot– inspired by a four-sided pre Columbian stone sculpture—with four wing like slabs to create four distinct faces, and upon each a unique painting composition. One can only apprehend the entire Cubist-like construction and its permutations by circling the work, as Woodman keys each composition to the uniquely contoured forms it decorates and the paint’s potential to alter perception of those surfaces, edges, and volumes. A fifth painting, this one on canvas flat on the floor, and overlaid with glazed earthenware slab remnants, completes each Aztec vase. With this relief painting, Woodman provides a base for the vessel, while establishing a fantastical mise-en-scène and, like all of the works in Illusions of Domesticity, a renewed picture of the pleasures of home life.