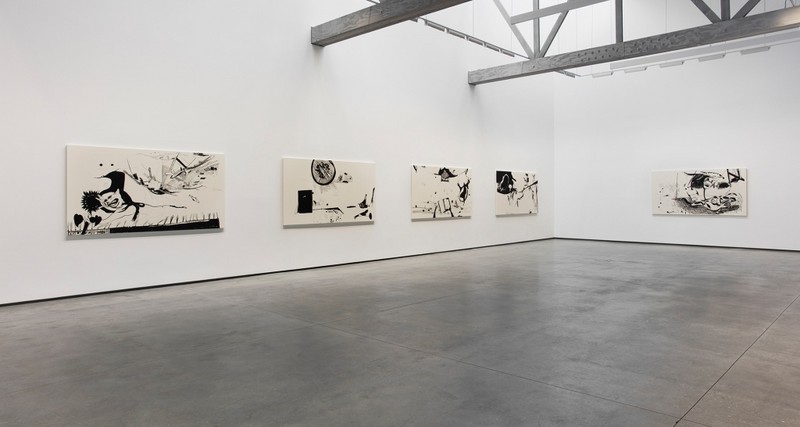 David Kordansky Gallery is pleased to announce Malvin Carcus, an exhibition of new work by Calvin Marcus. This will be the artist’s first exhibition with the gallery. It will open on January 30, 2016 and remain on view through March 26. An opening reception will be held on Saturday, January 30 from 6:00pm until 8:00pm.

Calvin Marcus constructs his practice starting with the most basic of materials: himself. Nonetheless, his work is not concerned in any overt way with his own biography or the specifics of his life. He is interested, rather, in the artist’s persona as it takes shape through carefully directed formal decisions and conceptual structures. The mixed-media paintings, sculptures, and drawings that result are as notable for their meticulous attention to craft as their surreal humor, evincing a playfulness borne from multivalent gestures and variance among serial forms.

Malvin Carcus centers around two new bodies of work installed according to a specific architecture, designed by the artist, that heightens their narrative overlaps. The viewer enters a space reminiscent of a hall of portraits, except that in this case the “portraits” are replaced by a series of shirts that have been fabricated by the artist, and that bring together strategies related to drawing, printmaking, performance, and readymade sculpture. Made from linen fabric onto which he has printed sketch-like images of a martini glass and olive, these idealized “leisure shirts” are worn by Marcus as he goes about his life. After a given period, each is then brought to a different Los Angeles dry cleaner. The finished pieces, as displayed here, retain all of the plastic covers, tags, and other interventions the cleaners apply to them; any remaining stains, meanwhile, reflect the impossibility of completely removing the presence of the artist himself from whatever he makes. In addition to providing a wry commentary on the nature of an artist’s labor (itself considered by many to be a rarefied form of leisure) the shirts pose a potential trajectory through the cityscape Marcus appears to inhabit.

The series of paintings that make up the second half of Malvin Carcus also perform a kind of mapping, albeit of a more interior, cerebral sort. If the shirts communicate a sense of the world outside the studio, the paintings reflect an imagined world generated completely inside it. Each is prepared according to an identical format: four-by-eight foot supports of portrait linen have been exactingly gessoed, sanded, and tinted to produce a surface that the artist describes as “ergonomic”, one that is intended to mimic the look and texture of paper as closely as possible. Accordingly, the action performed on these grounds is in many ways closer to drawing than it is to painting. The canvases are laid out on tables or the floor so Marcus can move freely among them, using black oil stick crayons to create imagery in an automatic, unedited fashion. Disregarding their status as individual artworks for as long as possible, he produces images that flow from his mind, through his hand, and across the surfaces of the paintings without mediation, generating discernible tension between the care taken to prepare them and the methodology (or apparent lack thereof) by which they are inscribed.

The images that come about through this process are as heterogeneous in their mood, style, and complexity as they are straightforward in their execution. Passages full of repetitive doodles give way to intricately rendered scenes imbued with semblances of narrative; flatly sketched groupings of lines alternate with modeled, representational forms. In keeping with this fluidity, the orientation of each painting is not fixed until it is installed, and is determined largely by the way imagery carries over from one canvas to the next. Seen together, these works depict the unfolding of the artist’s imagination in real time, granting exponential new breadth to Marcus’s already broad definition of self-portraiture. Like the “Tischmatten” (table mats) of Dieter Roth or the allegorical expanses of Cy Twombly, they transform the simplest of impulses, to scribble a line and see where it goes, into a metaphor for the ever-shifting contours of the human mind.