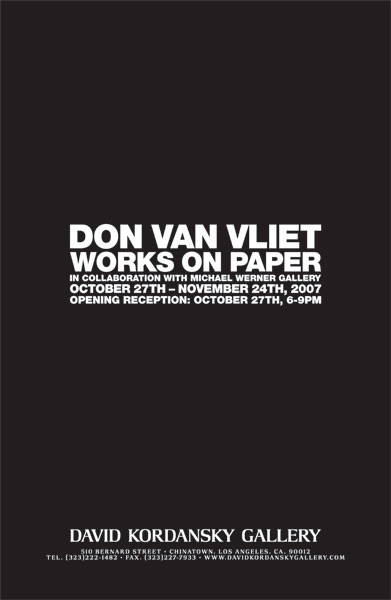 David Kordansky Gallery is pleased to present an exhibition of works on paper by Don Van Vliet. This exhibition is organized in collaboration with Michael Werner Gallery and includes Van Vliet works spanning the mid-1980s to the early 90s. The opening reception will be held on Saturday, October 27th from 6 to 9 pm, and the exhibition will be on view through December 1st.

Visual artist, poet, musician, and subject of legend, Van Vliet is best known in his incarnation as Captain Beefheart, seminal leader of the Magic Band from the mid-1960s through the 1970s. He worked intensely as a painter even while gaining critical recognition for his musical genius, and has been exhibiting his work internationally since the early 1980s. In 1981 he abandoned music for good, repairing to a trailer in the Mojave Desert to paint.

An ever-modulating bank of animals, desert vegetation, and distorted human figures comprise the unique pictorial vocabulary Van Vliet has nurtured for a lifetime. His works on paper are intimate revelations of this private language: bodies and muffled forms push, pull, and skirt along the fringes of a primordial universe. Marked with ink, gouache, wax crayon and pencil, these pieces display the immediacy native to the artist’s approach.

Van Vliet’s highly intuitive style transcends the art world penchant for swift categorization. His coarse delivery, primitive hieroglyphs, and use of caricature invite comparisons to New York School abstract expressionism of the 1940s and 1950s. But Van Vliet’s work diverges from this tradition in its pointed omission of all traces of the modern world and lack of concern for the communicative properties of painted forms. His self-imposed separation from the art world and proclaimed disregard for art history (he limits his declared influences to Vincent van Gogh and Franz Kline) evidence a career-long refusal to ally with any movement.

This work is devoted compositionally and conceptually to the fringes, propelled by discontinuity and absurdity. Van Vliet frequently omits a compositional fulcrum, yet arrives at rhythm and an unlikely comic coherence. The desert’s haunting expanse and impalpable imagery of mirage and myth pervade his paintings. Their glaring white spaces not only suggest this landscape, but leave openings for the viewer’s subjective intervention. This is terrain where the unconscious takes over.

Van Vliet’s output is riddled with non-cognitive associations and subconscious automatism, but it is nevertheless steeped in archetype. Incipient roots of form, myth, and perception come across with universal ardor. The artist, however unwillingly, has confronted the psyche of 20th century America, and spirited it away to the desert to expel its spasmodic dream-version.

Don Van Vliet was born in 1941 in Glendale, California. His work was recently exhibited at Anton Kern Gallery and Michael Werner Gallery in New York. In 1994 a retrospective entitled Stand Up To Be Discontinued traveled to the Bielefelder Kunstverein / Museum Waldhof in Germany, the Kunsthallen Brandts Klædefabrik in Denmark, and the Brighton Museum and Art Gallery in England. He lives in northern California.