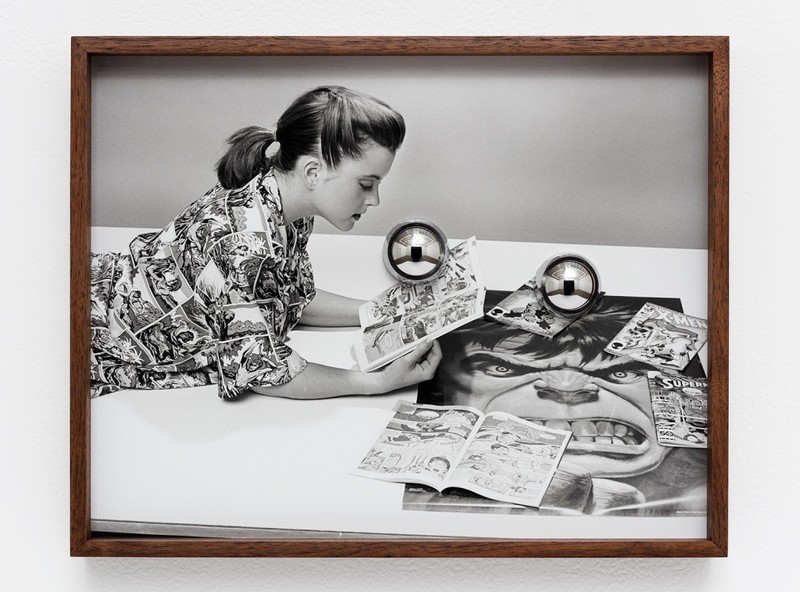 Elad Lassry addresses philosophical problems inherent to the picture. He has developed a rigorous visual syntax for analyzing the relationships between objects and their representations, and for examining the perceptual paradoxes that have haunted photography since its inception. Lassry uses analog methods to evoke the contemporary condition, avoiding the ubiquitous digital references that abound in contemporary art in order to pinpoint his medium’s overarching, if not archaic, conundrums. This exhibition will feature the debut of sculptures that pose questions about how pictures occupy physical and social environments; wall works that incorporate photographic, painterly, and sculptural information; and new series of pictures in which Lassry dismantles and democratizes standard photographic hierarchies of subject matter and technique.

Shown here for the first time, the floor-based sculptures on view are oblong forms carved from single timbers of Claro walnut wood. Relief images of fruits or vegetables animate the top surface of each; handle-like arches on their sides, meanwhile, evoke their potential for use as carriers of some kind. Given their optical density and monolithic mass, however, it is clear that these vessels, reminiscent of baskets or pods, are designed to transport an impossible cargo. In this sense they are also like hard drives or flash drives and become tangible metaphors for the collection and storage of pixels, situating a disembodied process in a physical space negotiated by embodied viewers. The images of fruits and vegetables, which suggest that the forms are occupied, are merely the result of wood having been carved out of them, further implying that the absence of information defines a picture as much as what is present. Full of such pictures, the exhibition space operates as a habitat for things that have gone missing.

New wall works further bring these themes to the forefront. One group features slabs of acrylic glass each used as a container for compositions comprised of a photograph, colored pigments, lengths of plastic tubes, and other sculptural elements. The photographs, printed by the artist using sourced archival negatives, depict familiar subjects stripped of their specific references, including food, fashion models, and animals. Their images are subsumed by the other materials with which Lassry surrounds them, so that the photographic object demands to be seen as one more thing among others, i.e., a form separate from the picture on its surface. Like all those that appear in this exhibition, the photographs are exclusively black-and-white; color only enters the equation in the form of objects that disrupt the ability of the photograph to transmit meaning on its own, as well as in the flows of pigment that lend the works a sense of internal motion. The painterly pigment is also a vivid reminder that pictures do not exist until the information within them is framed, captured, and introduced into a new, separate system. But such systems tend to fall apart as quickly as they come together, especially when they are separated from the contexts in which they were originally created.

Several new groups of photographs shed light on these processes. One, for example, involves sourced 8×10 negatives from which Lassry has made silver gelatin prints of images of engines. Isolated and austere, the engines seem to float against neutral backdrops; the images recall the fetishization of contrast and tone that define classic still-life photography. But because the negatives were originally made by a factory simply interested in documenting their products, the aesthetic qualities of the images are nothing more than a side effect of their prior functionality. In the context of the exhibition, the pictures relate to other pictures, made for entirely different reasons, on purely formal terms. The purposes with which these negatives began their lives now hover around them like ghosts, and the pictures operate in a manner akin to early spirit photographs, hinting at the presence of data that can no longer be fully perceived.

In another group, a rattlesnake is coaxed into a variety of calligraphic shapes for the camera. Since the images also include the tongs used to handle the snake and/or the arms of the snake’s handler, it is hard to tell whether the animal is being photographed as a specimen for scientific purposes or for some other, unspecified reason. The snake lacks the cognitive capacity to make a good portrait and is difficult to handle, making it almost impossible to photograph objectively. As an example of a recurring subject that Lassry has explored in previous photographs and a film work, the rattlesnake images relay his fascination with a medium that has a seemingly magical ability to fix an image on a flat surface while allowing its content to remain unfixed, mobile, and alive.