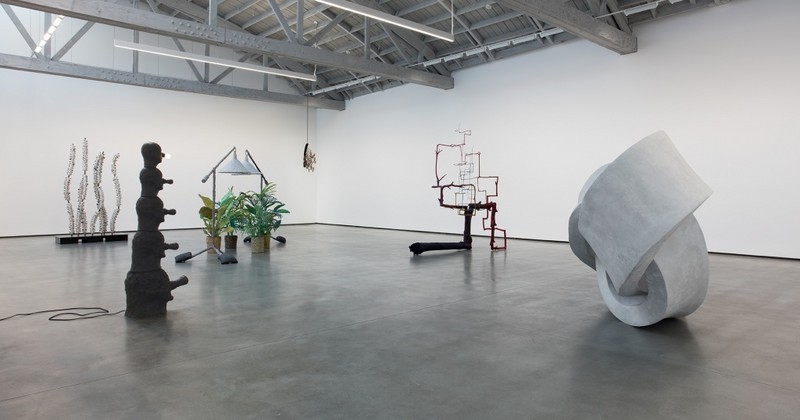 David Kordansky Gallery is pleased to announce an exhibition of new sculptures by Evan Holloway. This is the artist’s first exhibition with the gallery. It will open on January 30, 2016 and remain on view through March 26. An opening reception will be held on Saturday, January 30 from 6:00pm until 8:00pm.

Evan Holloway is one of Los Angeles’s most iconic and quintessential artists. Identified with this city since the beginning of his career, he exemplifies a distinct West Coast art historical tradition. This exhibition is his first hometown solo show in over a decade, and features a diverse group of singular sculptures that speak to the do-it-yourself innovation, mysticism, and idiosyncratic engagement with contemporary culture that are hallmarks of his work.

A graduate of UCLA’s MFA program in the late 1990s, Holloway led a generation that ushered in a new era of California-based art, proving that innovation was not limited to cultural centers like New York or London. His decidedly hands-on approach to sculpture evolved at a moment when modes of institutional critique, identity politics, and high-end fabrication were dominating artistic discourse. What the artist describes as an “analog counterrevolution” is also a one-man paean to the belief that standalone sculpture can, in and of itself, be both conceptually complex and intuitively accessible to a general audience.

This is immediately apparent, for instance, in the tree sculptures that have been an ongoing part of his practice for fifteen years: dead branches are found by the artist, carefully dismantled, and reorganized into freestanding structures of vertical and horizontal lines joined by right angles, which are then often cast in bronze. Human intervention, and the presence of the geometric grid, are thereby applied to an otherwise naturally occurring form. The similarities and differences between these two ways of seeing the world become bracingly clear, especially since Holloway frequently paints the resulting object with a chromatic sequence or progression, providing another visual system by which to read the work. A monumental new sculpture from this typology–the largest Holloway has executed, and the first outdoor version to feature color–will be on view here.

While he absorbed the lessons of modernist forbears, Holloway has also maintained an unabashed affinity for artists and modalities that typically fall outside the Western sculptural canon. For example, his stacks of painted bronze heads, their noses replaced with light bulbs that flash according to various patterns, function as totems possessed by a spirit of carnivalesque familiarity. Another ongoing series making use of spent batteries evokes the studded forms that lend Nkongi sculpture a charged energy, which is ironic given that the batteries themselves are no longer able to supply the energy they once contained. With gestures like these, Holloway creates objects suffused with a prickly, menacing beauty that is at once personal and universal, channeling an intensity of vision also seen in the work of artists like Louise Bourgeois. In the case of the battery works, he also reveals a picture of the damaged ecological circumstances that define our time, even as he refuses to lapse into lament or facile critique. The batteries have been rescued from their untoward oblivion, their status as units of pollution redeemed by the mysterious power of art.

Holloway delights in objects that have equally strong esoteric and exoteric manifestations. This is particularly true of a large sculpture in the shape of a Möbius strip that evokes the sensuous forms of Barbara Hepworth and Henry Moore. Impossible to grasp as an overall shape except by walking around it, the work, like the idea of the infinity loop itself, yokes perception and projection together. The sculpture’s multiplicity is a virtue of its oneness, and vice versa. And yet, in a move characteristic of Holloway’s practice, the sculpture also features a pronounced olfactory component: It does double-duty as a holder for a stick of incense. As the viewer circumnavigates the sculpture, the sweet, heady aroma permeates his or her experience, forging associations with spiritual mysticism and the myriad forms of consciousness expansion, chemical and otherwise, that are abiding facets of the postwar cultural narrative in California.

For Holloway, each work arises as a result of its own conceptual system and engineering requirements. This makes his project antithetical to the unified aesthetic of minimalism or the environmental cues of institutional critique, in which contextual frameworks determine how an object will look and feel. Influenced by formative exposure to punk and grunge culture, it also means that he avails himself of ordinary materials that he can source and manipulate on his own. For all of its sophistication and art historical resonance, Holloway’s process, like that of H.C. Westermann, Bruce Conner, Mike Kelley, or Bruce Nauman, has a touch of the shop rat’s democratic insistence on makeshift experimentation. The significance of individual human labor is evident in this approach, but perhaps more important is the idea that sculpture is first and foremost dependent on its material read, on the way it describes how physical things are put together. However, Holloway’s interest in occult ideas and mathematical patterns suggests that the material read is not necessarily about the material world; in his work, what is seen is just as often prized for its ability to reveal an unseen, hidden structure of reality.