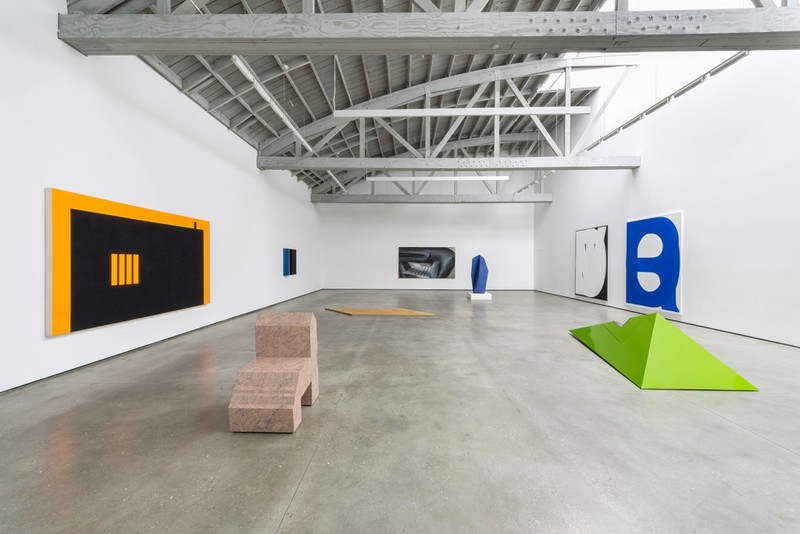 David Kordansky Gallery is very pleased to announce Flat World, a group exhibition organized by Karma, New York. The exhibition will open on Friday, June 26, 2015 at 5130 W. Edgewood Place and will continue on view through August 15. An opening reception will be held on June 26 from 6:00pm until 9:00pm.

Flat World includes works by Richard Artschwager, Tauba Auerbach, Will Boone, Jeff Elrod, Robert Grosvenor, Peter Halley, Lee Lozano, John Mason, and Charlotte Posenenske. It is, on the surface, an exhibition concerned with the formal condition of flatness and its iterations in a variety of media. But it also offers a broader look at how compression is more than just an indicator of limited perspective; Flat World contrarily demonstrates that flatness can become a container for unexpected depths, complexity, and discovery. In addition, with objects on view made in the 1960s, the 1980s, and 2010s, the show uses flatness as a focus point to trace an arc of formal development as one century, and one millennium, gave way to the next, and major art historical movements saw their themes compressed and therefore transposed.

A 1969 quasi-vehicle by Robert Grosvenor, which carries the post-minimalist ethos to an extreme, consolidates the major themes of the exhibition. This pyramidal sculpture was designed as a functional automobile; its austere geometry, which appears to be anathema to the contours and softnesses of the human body, has in fact been designed precisely with those contours in mind. Here is a case in which seeing the form as nothing more than a construction of flat green planes (like seeing the Earth as flat because recourse to the immediacy of the human senses can make it feel that way) only reveals part of the story. And yet the object’s flatness is inextricably part of its genetic code, just as the Earth was indeed flat to those who perceived it as such; their “mistake” did not prevent them from exploring the world, developing technologies, or experiencing a full range of joys and disappointments.

This kind of duality links together several of the other objects in the show. A classic prison painting from the 1980s by Peter Halley, for instance, is both a study in angular geometry and an invitation to meditate upon sociological or anthropological concerns. Form and content are inseparable, and the relationship between them can open up a flat spatial depiction into something with expansive conceptual volumes. In other cases, as in a recent large-scale ceramic sculpture by John Mason, form is content, and the complex series of engineering strategies the artist brings to a material like clay, which presents specific structural challenges, imbues his abstraction with a high degree of tactile presence. Related formal issues find an altogether different expression in the work of Charlotte Posenenske, which establishes visual tension between its convex and concave panels (as well as their saturated colors) and the flatness of the white wall; but while Mason’s work foregrounds the efforts of the individual maker, Posenenske’s practice was taken up with the utopian potential of industrial design.

Indeed, design can be said to be an underlying theme throughout Flat World. Sometimes it crops up in literal fashion, as in sculptures by Richard Artschwager that take the form of chairs built from the thinnest of wood veneers held in place by underlying structures. Given their shapes, these objects would contort any body that attempted to sit in them. Therefore their potential use, while an unavoidable part of the equation, is forever subverted; this can be understood as a variant on the basic subversion that separates art objects from functional ones. Tauba Auerbach’s intricately cut plywood sculpture, meanwhile, takes the strong planar quality of that material and, in the artist’s words, “italicizes” it. This typographical frame of reference brings to mind the wealth of information that can be transmitted within the flat physical space of the printed page. New paintings by Will Boone work into those spaces directly; his acrylic on canvas pictures involve the layering of monochromatic, boldly rendered letters directly on top of each other, one after the other. Though they make no obvious claims toward spatial illusion, they nonetheless create the very physical sense that their forms are moving out from the picture plane and towards the viewer.

This correlation between a line (which is inherently flat) and the volumetric or architectural spaces that contain it is presented in inverse fashion in a wall painting by Jeff Elrod. Because his pictured forms are often first generated in a digital format, they bring with them the potential for quick transformation that characterizes digital environments, in which images can easily be so easily manipulated that the emotional or philosophical ramifications of doing so are too easily ignored. Elrod reinstates the importance of corporeal experience by rendering such imagery on an actual wall, forcing it to relate to the other objects in the room. If this can be described as a technologically advanced form of old fashioned “push and pull,” a major 1964 painting by Lee Lozano remind us that images rendered on flat supports are often able to move us as deeply as, if not more so than, the actual world they depict. The painting provides an uncanny conflation of Lozano’s early gestural style with the graphic tendencies that would define her later work. A wrench and a razor are crammed into the frame; the active, modeled brushwork used to describe the former contains, both figuratively and literally, the sharp precision of the latter. This is flatness pressed into service, used like the tools inscribed on the picture’s surface, subjected to the intensities of sexual desire and violent force.

Karma is a publisher, gallery, and bookstore in New York.
www.davidkordanskygallery.com