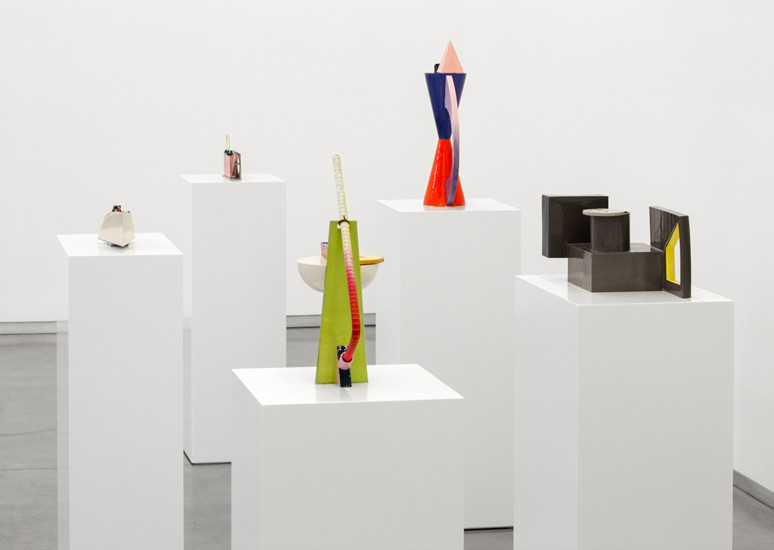 GRAPEVINE~ was conceived as way of exhibiting a group of artists who have all worked in clay, in California, for more than 40 years. Throughout that time these artists have always sought to contradict the limitations of the medium in terms of its craft parameters. It might sound obvious, but there is something about this work brewing on the West Coast. I can't imagine it surfacing anywhere else with its strangeness paired with such dedication to finish and quality. The show is intended to reflect a fan's perspective rather than an exhaustive attempt to chronicle the history of the ceramics movement in California, as the Pacific Standard Time exhibitions recently performed this function perfectly.

It's revealing to consider the works on view in light of the current state of ceramics in the contemporary art world. Though clay is drawing new attention among younger artists, these "visitors," as one ceramics elder described them to me, seem to be focused on bringing out the medium's malleable qualities. Meanwhile the "permanent residents" are very much still exceeding themselves in the studio. The specific agendas put forward by publications like Craft Horizons in the 1960s and 70s, calling for the promotion of new directions in ceramics, could today seem like a fence, limiting any cross-pollination between craft and contemporary practices. The work in GRAPEVINE~, much of it created during the extended "lost weekend" the medium experienced over the previous decades, resonates more than ever right now as a retroactive influence.

Historically the very nature of the ceramic medium implies the tradition of setting up a studio (or pottery), building the appropriate kilns, and constantly performing glaze and clay body tests in order to attain the desired effect. To me, this romantic (some might say dated) discipline is the thing that separates the work of the permanent residents from that of the visitors. For instance, John Mason still mixes his own clay body in an archaic industrial bread mixer, and Michael Frimkess develops latex gloves with stainless steel fingernails in order to throw his large vessels (without the aid of water) to the desired thinness. This rigor results in specific families of forms that can be identified throughout each artist's body of work––in many cases recurring motifs span decades of object-making––and a sense of serious play is always checked by technical discipline.

Perhaps even more surprising is the range of cultural information that makes appearances in so many different ways: I'm thinking about how art deco, custom car culture and architecture informs Peter Shire and Ron Nagle's work; or how popular staples of American comic imagery adorn the classically-inflected pots of Michael and Magdalena Suarez Frimkess; or the way Mason's work has such a Jet Propulsion Laboratory-engineered vibe. The more familiar gestural "abstract expressionist" style of the 50s and 60s, which for many defines ceramics-based work from California, is only a small part of the story. In subsequent decades these artists found their own specific languages, a natural evolution as the medium was applied toward more purely sculptural ends. At the same time, they were crossing paths in studios and universities, influencing each other and the course of the ceramics movement at large.

For instance, Nagle was in San Francisco paying close attention to the gang surrounding Peter Voulkos (who is represented in the exhibition by a small work gifted to Mason during their time as studio mates); this gang eventually became the group of ceramicists associated with Ferus Gallery here in Los Angeles, though I was surprised to learn how influential Michael Frimkess's early works were for Nagle at the time. Revered by other artists working with clay, Frimkess never received the same ongoing exposure as Ken Price, Billy Al Bengston and Mason, who were his peers studying under Voulkos in the mid 1950s at the Los Angeles County Art Institute (later Otis College of Art and Design). Magdalena Suarez Frimkess, meanwhile, came from a sculpture background, studied in Chile, and never trained formally as a potter. She began by working collaboratively, glazing Michael's pots from the time they met in the early 60s in New York, before starting to make her own sculptures and hand-formed pots in 1970. Arriving a few thousand years after the Greek and Chinese vessels they resemble, and a few decades before the pictorial pots of Grayson Perry, these objects occupy a place between many genres and continue a rich tradition of narrative storytelling through pottery.

Shire, some years younger than the others in the show, was also a keen observer, later becoming friends with Nagle and Mason––it was Peter who first introduced me to John. Interestingly, there was already an existing connection between Shire and Frimkess, as their fathers were acquainted through labor unions in Los Angeles in the 1940s and 50s, and both artists were raised in creative households infused with progressive politics, modernism, and craftsmanship. And one can perhaps trace connections between Shire's Memphis-associated work and the moment when Nagle's earliest, more malleable cup variations gave way to a pre-Memphis form of architecture. More recently Nagle's work has featured stucco-like, spongy, ikebana-core tableaux, and archimetric structures made with a model maker's precision; parts are shaped, adjusted and fitted together, and glazed with multiple firings to wizardly effect.

The fastidious steps behind all of the works in GRAPEVINE~ remain available to the viewer as tight information, yet always with enough variation and nuance to locate them within the studio environment as opposed to more familiar traits of outsourced fabrication. The formal training of a potter (a skill which is now weeded out of the few ceramics programs still in place) is visible in all of this work: proportion, the lift provided by a well-trimmed foot, and the energy and circulation of the clay itself are still defining factors. For the most part all included works have come directly from the artists, and I am grateful to have been allowed such a degree of physical searching and selecting during studio visits. The privilege of this access has both shaped the show in a very tactile and subjective manner, and allowed a greater understanding of the historic, technical, and conceptual conditions that inform each piece.

In addition to the artists, I would like to thank Ryan Conder, Karin Gulbran, Vernita Mason, Pam Palmer, Lesley Vance, Pierre Marie Giraud, and David Kordansky.

For further information, a comprehensive interview with each of the artists in the show can be found archived online in the Smithsonian Archives of American Art: http://www.aaa.si.edu/collections/interviews/