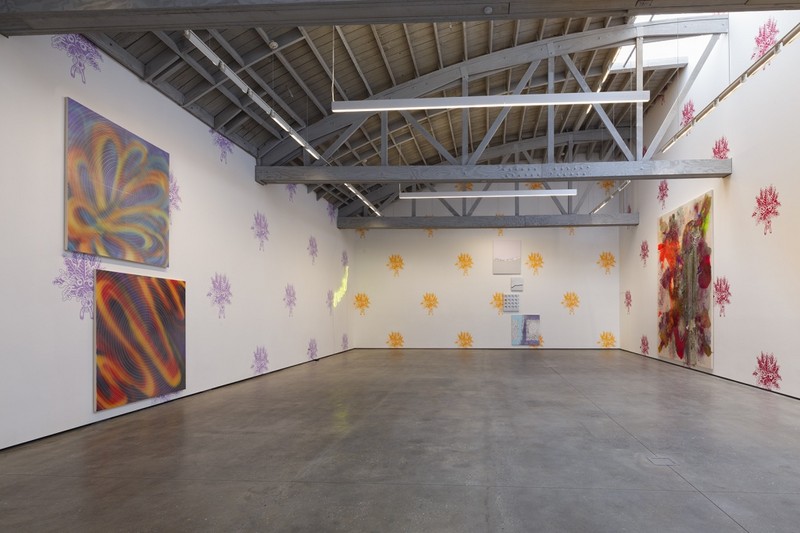 David Kordansky Gallery is very pleased to announce John Armleder, Stéphane Kropf, John Tremblay, with guests Mai-Thu Perret and Blair Thurman. The exhibition will open on Saturday, March 14, 2015 at 5130 W. Edgewood Place and will continue on view through April 25. An opening reception will be held on March 14 from 6:00pm until 8:00pm.

John Armleder, Stéphane Kropf, John Tremblay, with guests Mai-Thu Perret and Blair Thurman brings together the work of five artists united through common influences and friendship. The exhibition will take shape as a single immersive installation. As a mosaic of paintings and other wall-based works in which the conversations between the artists are as important as their discrete contributions, its eccentricities and delights celebrate the pleasures of collaboration and friendship, including above all the collaboration between object and viewer that is art’s necessary fulcrum.

Recognized as one of the singular figures in postwar art, John Armleder has both identified and unraveled many of the major threads that make up contemporary aesthetic discourse. As a maker of performances, paintings, sculptures, installations, and works that defy such classifications altogether, he consistently upsets expectations about what art is and how it functions. Running through each of his projects is a deep respect for the energizing role that chance plays in art as in life.

One of the exhibition’s major features, a large-scale example from Armleder’s ongoing Puddle Painting series, speaks to the incisive sense of play that characterizes his work. The making of these paintings involves pouring large quantities of several different kinds of paint on a canvas laid flat on the ground. Toys, glitter, and other sorts of bric-a-brac are often added to areas where the pooled paint has not yet dried, introducing still more texture, detail, and potential for unexpected juxtapositions. The canvas is then propped upright as the chemically incompatible materials interact and destabilize one another, and the dripping paints reshape the work’s overall composition. The act of painting becomes one of establishing conditions and then stepping out of the way, so that the piece takes shape according to contingencies outside of the artist’s control.

Such openness of spirit guides the exhibition and can be discerned in the works of each of the other four artists. Indeed, Kropf, Tremblay, Perret, and Thurman have worked with Armleder and helped him to realize projects over the years, as he in turn has acted as a lively supporter of their practices. This collaborative ethos takes pervasive material form in the stenciled wall painting that covers the gallery and provides the backdrop against which the other works in the show are seen. A found image of a bunch of kale with a disgruntled cartoon face is repeated throughout the space; each wall receives the pattern in a different color.

This “grumpy kale” motif sets a baseline of humor that suffuses the show as a whole. It also takes its place among the series of wall paintings that Armleder has created since the beginning of his career. By bringing the background into the foreground and doing away with the separation between art and the viewer’s immediate experience of it in a given place, the wall paintings are born of the idea that art is not an isolated moment on a blank wall, but, like other things encountered in the world, a fluctuating part of what one sees.

Against this backdrop hang a genre-dismantling array of works that draw from the formal languages of painting, sculpture, literature, and science. Stéphane Kropf, for instance, participates with paintings from a new series whose making involves the use of stencils cut with a laser plotter. Pushing this technology to its limits to create impossibly thin spirals, he then uses a spray gun to lay down swirls of acrylic paint. Because of their extreme optical complexity, the paintings appear to change depending upon where one is standing; accordingly, they resist attempts to document them photographically and celebrate the miraculous technology of the human eye. Emphasizing such acts of heightened looking in turn calls attention to the viewer’s part in the production of artistic experiences.

For the artist, meanwhile, craft becomes a mode of response, a way of adapting to what the world offers, and a means of allowing materials to express their own intrinsic beauty and aesthetic interest. In this vein, John Tremblay has made new wall-based works in which shaped canvases are meticulously constructed to surround pieces of found scrap metal. The canvases are then covered with painted patterns that add purely visual rhythms to the tactile ones already in play. Even as Tremblay exercises control over his materials, the found object that gives rise to each work is ultimately “responsible” for shaping the setting in which it is presented, and the process of making the piece is one of constant interaction with a preexisting form. One is left with the feeling that art is the kind of essentially democratic activity that can begin with anything, anywhere.

The possibility for a casual encounter to turn into a meaningful experience also underlies the participation of the exhibition’s “special guests.” Like actors making cameo appearances in a movie, Mai-Thu Perret and Blair Thurman each contribute neon works that punctuate the installation, give added definition to its relationship with the gallery architecture, and accentuate the “grumpy kale” wall painting. In Perret’s case, her neon’s squiggle form is borrowed from a passage in The Life and Opinions of Tristram Shandy, Gentleman, 1759-1767; one of several moments when a non-verbal mark animates the pages of the classic novel, it conjures the freedom of a life lived without attachments, as well as the pitfalls associated with free-floating whimsy that exceeds logic or control. Thurman’s piece, on the other hand, is comprised of a series of squares in a stepped arrangement, like the glowing fragment of an endless grid: as a corner built of many corners, it suggests that the rigors of geometry lurk everywhere, and that its abstract principles are always rooted in what is felt and seen.