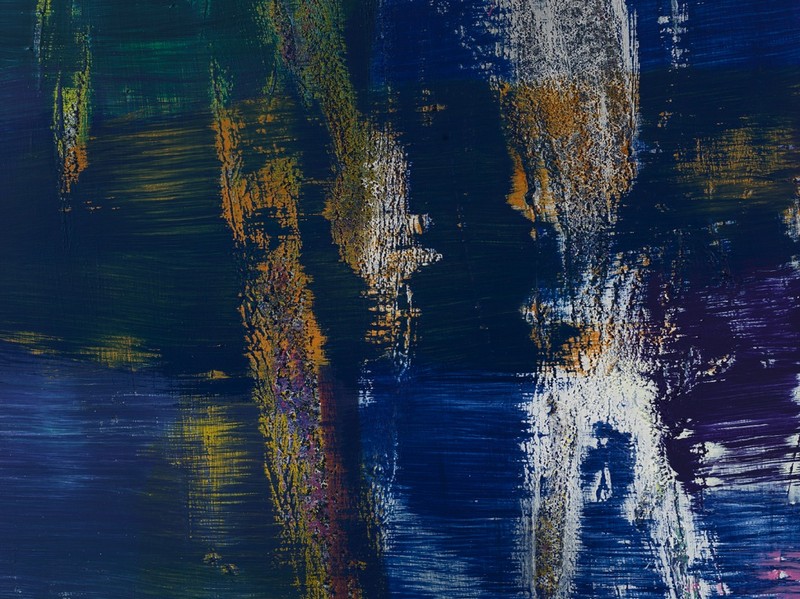 David Kordansky Gallery is very pleased to announce an exhibition of new work by Jon Pestoni. The exhibition will open on Saturday, March 28, 2015 at 5130 W. Edgewood Place and will continue on view through May 23. An opening reception will be held on March 28 from 6:00pm until 8:00pm.

Jon Pestoni’s paintings are proposals, formal experiments in which competing, even contradictory, aesthetic positions co-exist, often within the same work. They are documents of an ongoing process of self-examination, cancellation, and improvisation in which the desired result is not only visual surprise but also the continual rediscovery of how art feels in real time, on a moment-to-moment basis.

As his work has evolved over the last few years, Pestoni has introduced new materials, varied formats, and more dramatic shifts in scale to his repertoire of moves. In addition to medium- and large-scale canvases, this exhibition will include a varied selection of new mixed-media paintings on paper mounted to aluminum. These works provide the viewer with an intimate sense of how Pestoni gets from one compositional idea to another, and how a given idea, once subjected to his process, can emerge in two or more drastically different ways.

The paintings on paper are made in series, on the floor, so that they can accommodate gestures usually associated with much larger works. Layering is rendered visible by virtue of transparency (though the works are made exclusively with oil-based mediums, there are moments in which the paint takes on the diaphanous quality of watercolor), but also through sheer accumulation of material. Like many of Pestoni’s newest paintings, these works on paper feature the use of cat litter, which creates optical static and gives them a prickly, tactile immediacy that generates unexpected connections between the deckled edge of the paper and the textures applied to its surface. The artist forces what might otherwise be considered separate layers of paint to fuse with one another as the picture’s background crumbles into foreground, disrupting the eye’s ability to establish narratives about how a composition is made.

Because such disruption suggests that the pleasures of art making are often borne of its deepest frustrations, it also allows any given painting in the exhibition to be read as a critique of ideas or aesthetic presumptions present in another. In this sense Pestoni’s work is like a laboratory in which faith is placed in methodology rather than the achievement of preconceived results. To push his process forward he practices a form of productive self-sabotage that strips painting down to its most basic principle: showing up in the studio to confront what was left unfinished the day before. The work’s life force can be said to reside in this unfinished state.

Accordingly, Pestoni considers a painting successfully resolved when it undoes what was originally expected of it. In the medium- and large-scale canvases on view in the show, this principle plays out in dramatic fashion. Some as big as ten feet tall, they often broadcast the very sublime, overarching luminosity that the paintings on paper resist, carrying the intimate connection between body and brushwork into a broader, more expansive register.

The moods conjured by these works vary widely, and can often contradict each other. For instance, Pestoni fills some of the recent paintings with layers of graphic, quasi-figurative forms that perform the unlikely action of transforming cubist iconography into a puzzle of flattened spaces. Others are open fields in which subtle gradations of hue; complex interactions between pigment, medium, and cat litter; and an emphasis on rewiring the relationship between figure and ground allow their compositions to vibrate as singular pictures. But these are pictures that appeal to more than the eye. They assert that the fullest possible range of emotional and intellectual associations are part of the act of looking, and that self-examination and self-doubt are the crucibles in which chaos is alchemically transformed into meaningful experience.