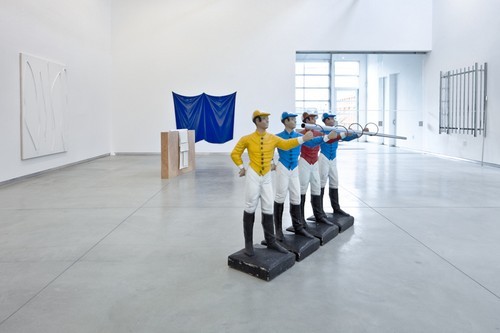 David Kordansky Gallery is pleased to announce Kathryn Andrews, Heather Cook, Lesley Vance, Lisa Williamson, which will run from January 23 through March 6, 2010, with an opening reception on Saturday, January 23 from 6:00––9:00pm. The exhibition will contain new work by the four Los Angeles-based artists, and will highlight the contrasts and commonalities in their respective methodologies, while focusing on how each uses material criticality and formal relationships to suggest new possibilities for abstraction.

Each artist's contributions reflect a heightened awareness of the history of her chosen media, as well as an incisive sense of curiosity and play. Andrews, Cook, Vance and Williamson are all deeply engaged in material experimentation. In particular, each addresses the legacy of minimalism, drawing attention to the basic physicality of objects while asking: Is it possible to perceive materiality in and of itself, apart from the symbolic so strongly associated with it? To answer this question, each artist trades in abstraction, but each elides its traditional mode, in which the movement is away from a given form toward a representation of it, opting instead for a lateral approach, a serial one, using materials differently from one work to another.

In Lesley Vance's paintings, for instance, historical examples of the still-life genre become starting points from which to create new compositions. The relationship between a painting and a still-life is treated as a material fact in itself, and it is this fact that is then subjected to the studio process, and the vagaries and contingencies of photography (Vance makes photographs of still-lifes from which to work) and paint-handling. The finished paintings themselves, however, are compositions that chart the valences of paint as a physical fact, in some ways independent of the systems of signs in which they are inscribed. They are records of a multi-phased process that is continually opening itself to the outside world according to a shifting set of protocols.

Heather Cook's is also a practice predicated on a phenomenological approach to painted mark-making. In her case, however, the points of departure are more specifically minimalist, and incorporate a hybridized approach to action-painting and the readymade. Jersey cotton material is folded on the floor or draped and pinned to the wall, then sprayed with bleach. When the cotton is unfolded, the composition is revealed: the result of a negative process in which color has been removed rather than added, it is a direct "picture" of the physical reality of the material in a previous moment, as well as a slyly succinct record of the artist's interaction with it.

Present throughout the exhibition is a sense that the works are a result of thinking through materials, that physical objects can stand in as markers for cognitive and intuitive ways of conceptualizing the world. By isolating the ways in which thought is related to the manipulation of objects and materials, and in some cases stripping those relationships down to their most essential forms, the artists seek to advance the formal conversations that animate their practices.

Lisa Williamson uses this process as both methodology and subject matter to address the expressive potential of objects. Most recently she has been creating works, both floor- and wall-based, that act like paintings. A wood stand has been draped with varying lengths of canvas; a black wall-based work marked with chalk seems like a cousin to a Frank Stella, but is uncannily "marked" with a folded piece of brightly-painted canvas that has been draped over its top edge. The work is rigorously formal, but its signifying reach moves beyond established art historical codes. It poses questions about how and why art gets made, relating the artistic to other modes of thought and invention.

In a parallel way, Kathryn Andrews' work investigates the mechanics of how representation takes place. By combining found objects with those she has carefully fabricated, Andrews draws the viewer's attention to the materiality of symbolic objects. Andrews' gestures ask the viewer to collapse their metonymic impulse, replacing it with a refreshed sense of how we relate, both physically and conceptually, to the things around us. When, in one work, she ties a balloon to a highly finished metal object designed to closely resemble a fence, and titles the work with the opening date of the exhibition in which it is shown, she couples a timeless, iconographic form with a performative event that can only exist over a particular period of time in a particular place. The balloon is only to be refilled or replaced once a year, on the anniversary of the work; otherwise it is subject to deflation, and thus decay.

The gesture highlights the negative space between an idealized form and one that exists in the actual world, and thus the difference in the way that we, as viewers, deal with each. A similarly observant stance toward the material reality of objects and marks can be seen as the common ground shared by each of the artists whose work is represented in this exhibition. By isolating formal characteristics and specifying the ways in which physical objects represent or stand in for both ideas and other objects, they present bracingly clear portraits of the artist's endeavor at its most basic and profound levels.