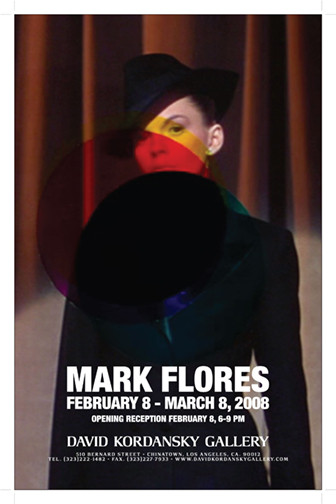 David Kordansky Gallery is pleased to present the second solo exhibition of new works by Mark Flores. The opening reception will be held on Friday, February 8th from 6 to 9pm, and the exhibition will be on view through March 8th. Flores’ poetic application of history draws together seemingly disparate motifs in a unique interrogation of beauty and visual pleasure.
At the conceptual core of this exhibition are Flores’ representations of Antinous, the Roman Emperor Hadrian’s adolescent lover who was deified by the emperor upon his premature death. Hadrian commissioned statues of the boy in myriad fantastical incarnations, effectively spawning a cult of the ideal male form. Flores’ Antinous Ubiquitous constitutes a meditation on desire, and speaks to a two-fold model of art appreciation that subsumes academic study and prurient interest.
This body of work alludes to strategies of the early homosexual emancipation movement, which invoked the ancients’ regard for love between men to legitimize homoerotic imagery. Flores’ portraits of actors who played the part of “Cowboy” in Mart Crowley’s Boys in the Band parallel the Antinous series. They are drawn from images in After Dark, an entertainment magazine known for its – ostensibly incidental – homoerotic content. Like Antinous, the character of “Cowboy” is a “beautiful blank” open to the viewer’s designs.
Flores traces a reverence for light from its appearance in ancient faiths to 20th century cinema and modernist color theory. The spirit of Bauhaus painter Johannes Itten inhabits this new work and serves as a link between ideas on tonal brilliance, intuition, and the subjectivity of the viewer. Flores expands Itten’s color grid into a large-scale painting that unites a wider conceptual scheme. Comparative Brilliance / After Itten complements Flores’ drawings of discarded frames from Judy Garland’s Easter Parade. Colored circles, which are by-products of Technicolor color separation, impinge upon her image, imparting a kind of chromatic pathos to the portraits.
Themes associated with gay identity form a vital link in Flores’ critical matrix, but he pushes beyond them to larger issues of visual pleasure. This spirit of investigation is embodied by Narkissos / After Jess, drawn from a photograph of the bulletin board used by the collage artist Jess. His visual index of the male form and canny “paste up” method mirror Flores’ imaginative archive of aesthetic appreciation.
In transferring subjects from one medium to another, Flores not only germinates dialogues between media, but composes a record of his own process of looking. Flores’ exploration of how we receive beauty avoids resolution, accepting it concurrently as an "irrational" phenomenon as well as a thing that can be studied, theorized upon, carved into stone.
Mark Flores has had a solo exhibitions at Alison Jacques Gallery, London, England (2006). He was most recently included in Sympathy for the Devil: Art and Rock and Roll Since 1967, curated by Dominic Molon for the Museum of Contemporary Art, Chicago, IL. He lives and works in Los Angeles.
www.davidkordanskygallery.com