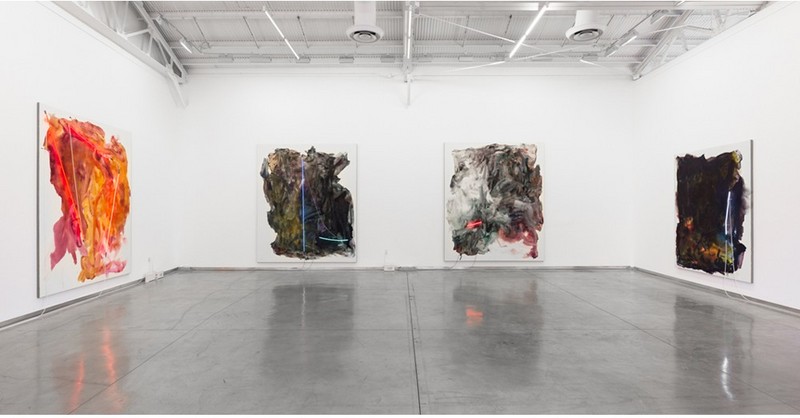 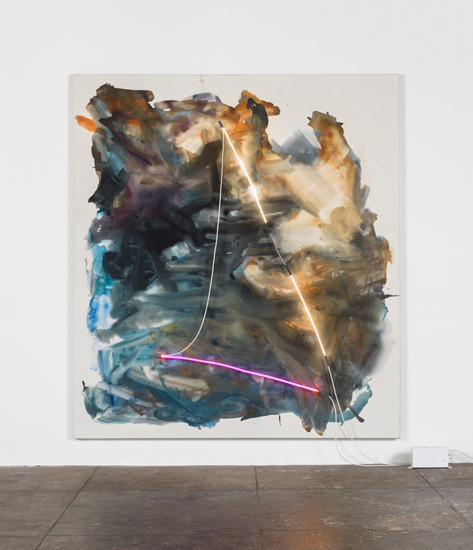 David Kordansky Gallery is very pleased to announce Los Angeles, its first exhibition of work by Mary Weatherford. The show will open on April 19 and run through May 31, 2014. An opening reception will be held on Saturday, April 19 from 6:00pm until 8:00pm. Los Angeles is the latest of the artist's exhibitions to address notions of place through painting, as well as the use of sculptural elements––in this case neon lighting––to expand painting's formal reach. It also finds Weatherford experimenting with new scale and formats, and a broader, more intense range of color relationships.

Mary Weatherford is one of the most influential Los Angeles-based painters of her generation. Born in Ojai, California, the trajectory of her project encompasses a uniquely West Coast vision, one in which the language of abstract painting is used to chart the physical and metaphysical features of landscape. Her work can also be read as a form of critique that grapples with canonical gestures in modern abstraction, but it is never solely limited to an art historical frame of reference. Rather, it operates as a mode of inquiry, an engine for research, and a way of responding to natural and social contexts of all kinds.

Each painting in Los Angeles begins with a gestural abstraction made in thin layers of Flashe paint. The fields of overlapping color that result are at once atmospheric and rooted in the physicality of their application. They are juxtaposed with one or more neon tubes arranged according to preliminary sketches that take wiring and power source into account. As Weatherford has refined this process, the forms described by the lighting and wiring have taken on increased prominence as a kind of line-based drawing. In turn, their material presence emphasizes the physical qualities of the paint and support, so that the tooth of the linen, for example, becomes an integral feature of the work.

In conceptual terms, the paintings in the show are meditations on zones at the perceptual edges of Los Angeles, away from the landmarks traditionally associated with the city. However, they are not intended to function as literal counterparts to specific locations, but as embodied channels through which places––and the impressions and associations they engender––suggest new forms. Painting therefore functions as a way of recreating and filtering experience, and of charting the ambient qualities of a metropolis as they intersect with the internal life of the artist who perceives them.

As she turns her attention to the place she has called home for much of her life, Weatherford engages autobiography at the most embodied level. She also provides viewers with the opportunity to consider the full scope of her development as an artist. The scale and ambition of a number of the paintings in Los Angeles, for instance, harken back to some of her earliest work, particularly those paintings from the 1990s in which she took on legacies of monumental abstraction from a critically feminist viewpoint. Through each phase of Weatherford's evolution, painting has provided a lens through which the world, the self, and the ever-shifting dialogue between them come into radical focus.