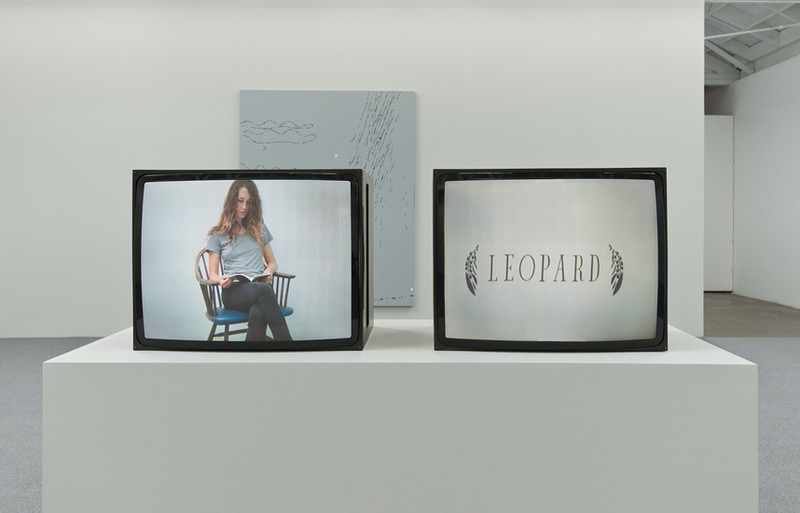 David Kordansky Gallery is very pleased to announce Leopard, an exhibition of new work by Matthew Brannon. The show will open on November 16, 2013 and run through January 18, 2014. An opening reception will be held on Saturday, November 16 from 6:00 until 9:00pm.

The text of the book will only be present in the form of a video work on two monitors installed in the center of the gallery. Surrounding the monitors is a suite of paintings whose primary role is containment, their role as visual documents in some way secondary to their role as vessels for language. To this end, a slot has been cut into the side of each painting; inserted in the slot is a book, one copy of an edition of "Leopard" limited to the number of paintings in the show. Though viewers cannot turn its pages, they are, in effect, inside its world. The impulse to experience the narrative by reading it is subverted. It is replaced by the phenomenological experience of the objects 'on view'––paintings pregnant with language they obscure.

Brannon has literally, even sculpturally, emptied out painting, transforming it into a void to be filled. The 'unique' painting is subject to the presence of a reproduced book, a reminder that the inversion of reproduction technologies has played an important generative role in the development of Brannon's practice. The early letterpress works for which he became known were issued in editions of one, highlighting the sculptural and painterly possibilities inherent to a medium designed to disseminate text and other seemingly 'flat' information. This continuum of crossed genres (printing-painting, painting-sculpture, sculpture-video) becomes a place of fecundity as well as free-floating anxiety, one in which the physical manifestation of an artwork is always attentive to the conceptual structures that give rise to it.

This applies to the compositions that appear on the paintings as well, which are made not with brushes and oil, but via printing processes. Swooping, stuttering lines punctuated by dots of color, these compositions have been screened onto canvas chosen for its own physical and visual properties. Like Pop-revisionist takes on Twombly, or a slasher flick villain's attempt at modernist abstractions, the paintings are a sinister interior decorator's wet dream. Their beauty is insidious, and though they are indicative of Brannon's particular graphic vocabulary, it is impossible to ignore their participation in the broader formal debates specific to contemporary painting.

The video work adds the durational aspect of reading text into the space of the exhibition. On one monitor, a woman reads the "Leopard" book to herself; on another the text scrolls upwards like the credits to a film. The implication is that the viewer sees what the woman sees, but her thoughts fall outside the frame. Even here, with the act of reading mirrored back to the viewer, Brannon keeps the text itself in a fleeting, ephemeral state, and keeps it from ever being a physical thing that can be held in the hands.

However, this does not prevent the perversity and sheer strangeness of the novella from seeping into the viewer's consciousness, where it lingers as a kind of infection. The narrative is a particularly intense distillation of the fictional universe that Brannon has created over the course of his career, one that seems to intersect with our own and call attention to its anxieties and obsessions. But it also brings together an idiosyncratic array of cultural touchstones, including surrealist literature (the proto-surrealist Les Chants de Maldoror by the Comte de Lautréamont comes to mind), avant-garde film, and the theater of the absurd. Like any fiction, it is a construction, a conceptual machine that reflects, dismantles, and ultimately generates an experience of the physical world that surrounds it.