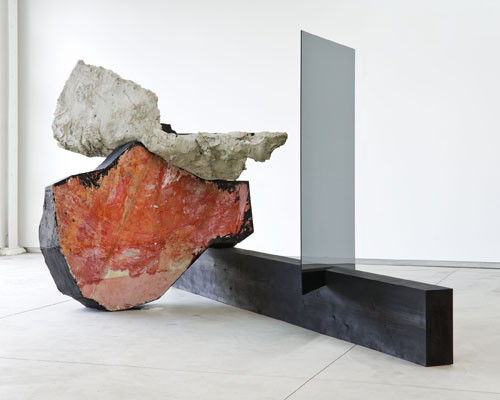 David Kordansky Gallery is pleased to present the second Los Angeles solo exhibition by sculptor Patrick Hill. The opening reception will be held on Saturday, February 7th from 6 to 9pm, and the exhibition will be on view at David Kordansky Gallery’s new Culver City space through March 21, 2009.
Patrick Hill’s sculptures appear to violate the elementary laws of physics by employing architectural materials in the service of constructing irrational structures. His heavy objects rest upon glass; what should be horizontal becomes vertical, and vice versa; giant slabs project in odd cantilevers. At once intuitively constructed and precisely engineered, each piece’s completion is a feat of daredevil finesse.
The central work of the exhibition, Screen, has a base of solid redwood. On this base rests a carefully balanced one-ton cement block, which in turn has another cement block placed upon it. The masses of cast cement find a counterpoint in a thin sheet of black translucent glass positioned in a slot on the wooden base and reflecting the precarious pile. Screen refers to its own fragility, and to the fragility of the built environment of Southern California, where intense seismic activity can make solid masonry collapse in an instant. The title Screen also brings to mind the silver screen of Warner Brothers’ Road Runner cartoons, with their desert landscapes, stylized violence, and Acme Brand Dehydrated Boulders coming into miraculous, if ineffectual, existence.
Horizontal (Erotic City) makes use of a sheet of clear 1⁄4 inch glass resting upon concrete blocks. This base supports three objects: another block of concrete, a 1⁄2 inch thick sheet of aluminum, and a vertical slab of white Cararra marble. The group is so perfectly placed that the glass does not shatter. These vertical elements are penetrated by slivers of wood, looking like the aftermath of a Midwestern tornado that has thrust a fragment of a tree into the side of a building. The scale of the sculpture and its marble element suggest an ancient tomb. Without explicit reference, the whole structure subtly points to sexual congress in a sarcophagus.
The exhibition also features Patrick Hill’s paintings, as much reliefs as paintings the works contain concrete “brushstrokes” that have been stained with inks and fabric dyes. Hill scores the concrete with a knife, as though drawing a line in a freshly poured sidewalk. As with the sculptures, Hill applies concrete to unlikely materials; in this case, canvas stretched on ingeniously thin supports that hold the weight of the concrete in a vertical position. Like an Abstract Expressionist, Hill makes his paintings horizontally on the floor. Only after they are dry can they be displayed on the wall. The result refers more to European abstract painter Antoni Tapiès than to American painters, another unexpected gesture from an artist whose work has been understood as California art par excellence.
In Patrick Hill’s work, architectural metaphors and structural explanations have their limits. If, as Johann Wolfgang von Goethe asserted, architecture is “frozen music,” Hill’s repertoire doesn’t resemble the ennobling classicism of Beethoven or Mozart that Goethe might have had in mind, but the wild excesses of his fellow Michigan natives, George Clinton and Iggy Pop. He courts the perverse and entropic, referring to distinguished predecessors like Giovanni Anselmo or Charles Ray, but standing their work on its head with his poised yet psychedelic works.
Patrick Hill was born in Royal Oak, Michigan (1972), and now lives and works in Los Angeles. He attended the University of Michigan and Otis College of Art and Design. His work has recently been exhibited at The Approach, London and Bortolami Gallery, New York. He was included in the 2008 Biennial Exhibition at the Whitney Museum of American Art.
www.davidkordanskygallery.com