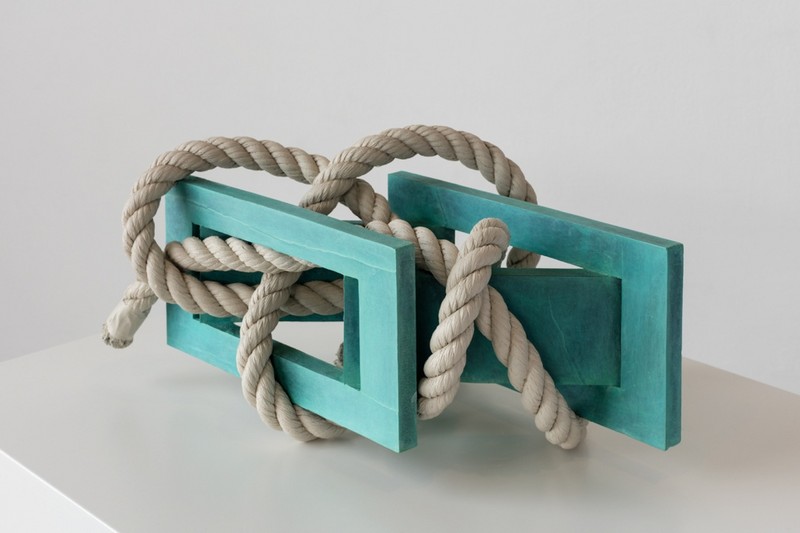 David Kordansky Gallery is pleased to announce /SKEWS/, an exhibition of new work by Ricky Swallow. This is the artist’s first exhibition at the gallery. It will open on Saturday, September 12, 2015, at 5130 W. Edgewood Place and will continue on view through October 31. An opening reception will be held on September 12 from 6:00pm until 8:00pm.

Ricky Swallow uses humble, ordinary materials to create precisely rendered objects that he then casts in bronze. The unique works that result are expressions not only of the objects’ constructed forms, but also of the process of transformation by which an otherwise inert grouping of forms becomes a sculpture. Swallow is invested in equal measure in the making of things and the testing of concepts; in hands-on work with cardboard, tape, and glue and the mediated potentials of the foundry; in the immediacy of craft and the austere elegance of geometric abstraction. His work therefore appeals directly to the senses while retaining the ever-curious philosophical register of a Socratic dialogue. As if to emphasize this, Swallow has installed the works in /SKEWS/ so that they can respond directly to each other, often eschewing standard hanging heights and calling attention to the spatial qualities of the gallery space itself.

The exhibition takes its title from a new typology for Swallow composed of variously slanted rectangular forms interlaced with what appears to be rope. Each element of these sculptures, “rope” included, is cast from bronze, making them compact tours de force of engineering more than exercises in trompe l’oeil. The snake-like rope elements, which Swallow paints using oil-based pigments, inhabit or animate the architectures in which he places them. In some cases the rope seems to provide the very structure that keeps the other elements from falling down; in others it threatens to consume them, torquing or offsetting their symmetry. And while the rope imagery and saturated patinas that define the rectilinear elements suggest nautical archetypes (anchors, undersides of ships, moorings), the eye quickly moves beyond such familiar associations, drawn to the choreography by which the sculptures interact with their pedestals and otherwise define the negative spaces beneath them.

Similarly nuanced perceptual prompts can be found throughout the exhibition. Flag/Tipped (soot), for instance, features a curving form that seems to treat the wall as a partner in dialogue rather than mere support. It moves toward and away from the vertical plane with a freedom that belies its mass; as if to accentuate this movement, Swallow positions the piece at a height that allows it to relate visually to the floor and the plinth-based works in the exhibition. Additionally, he has applied a deep, black patina to an object that, even in bronze, conveys the crisp lines of the cardboard tubes from which it was first crafted. Optical density complicates the perception of physical weight. In Perspective Relief with Cones #1, meanwhile, a luminous white patina focuses the gaze on two broad, angled planes delimited by cone-shaped forms. These planes retain the original cardboard’s creases and irregularities, which in turn recall gestural marks that bring the work into conversation with painting or drawing.

Such works also demonstrate Swallow’s use of the metal foundry as an off-site extension of his studio. After casting the objects in bronze he continues to refine, adjust, and alter them. This infuses the foundry work, in which he has taken an increasingly active role, with the same playfulness and openness that characterize earlier stages of his process. His practice is therefore not about one material or another, but an ongoing negotiation between different iterations of a single object. The transition to bronze, instead of freezing the sculptures in time, sheds light on the other materials and techniques that Swallow employs to make them.

Bidirectional evolutions of this kind are an implicit theme in the new Horoscope series of wall works. Each of these reliefs brings together two panels in which a sphere is surrounded by a band. Seen from a distance in filmic sequence they appear to be sculptural snapshots of an amoeba-like creature whose contours are constantly in flux, leading the eye around each composition like the rope in one of Swallow’s other sculptures. The surface textures provide further narrative action. Bronze lends the subtle pitting of the original rubber bands a haunting and humorous dignity that brings to mind the work of an artist like Hans Arp, whose surrealism hinged upon the sense of touch rather than the eye alone. This “tabletop” tactility finds also a newly expansive iteration in Molding Study (field), a wall-spanning sculpture in modular segments that turns a familiar element of domestic architecture into an example of minimalist monumentality. Like much of Swallow’s work, it suggests that static forms are in fact links in an endless chain of movement, and that they point beyond themselves in time as well as space.