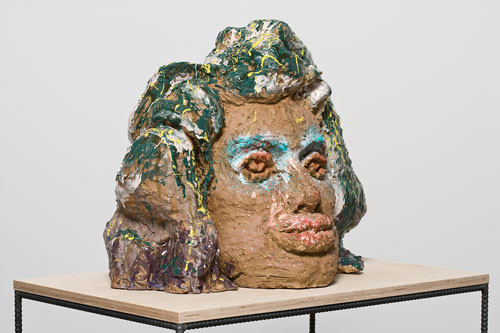 David Kordansky Gallery is pleased to present, This is me, is that you? a solo exhibition by Los Angeles based artist, Ruby Neri. The opening reception will be held on Saturday, June 20th from 6 to 9pm and the exhibition will be on view through August 8, 2009. Neri’s works are executed in ceramic, plaster and paint. They depict women, men, portraits of lovers, horses and landscape in a bold and expressionistic fashion.
Born in the seventies into the collegial environment of artists in San Francisco, Ruby Neri’s initial influences were the painters and ceramicists closely associated with her father, the Bay Area Figurative sculptor, Manuel Neri. Her works have steadily built upon these early influences to reflect her interest in an increasingly wide variety of visual sources: American Folk Artists such as Edgar Tolson, early twentieth century German Expressionism such as Ernst Ludwig Kirchner, and mid-century modern European sculptors such as Alberto Giacometti and Marino Marini. Accordingly, her paintings and sculptures are marked by a commitment to figurative forms that are modeled expressively by hand and animated by the application of unabashed colors, decorative patterning, and incised painted lines.
Suggestive social groupings of men and women alongside or riding on horses, stand and sit naked—not nude; the figures are confrontational in pose and spirit. They recall Greek Kouroi, sculptures of unclothed young men striding forward. They are defiant and proud as active subjects, not passive artists’ models. This energy is heightened by Neri’s delight and involvement in an intuitive act of making. Handfuls of plaster added to an armature and built up over time are evident in the larger sculptures, which she also carves away in some places, a process that provides the figures with their own strong physical materiality. Some of the ceramic figures are composed of limbs made entirely of thrown pots, a witty reference to and use of traditional ceramics, here renewed as the form and material of contemporary art and life.
This forceful energy carries through in Neri’s new paintings. Yellow, green, orange and black paint is built up in dense impastos, using broad brushstrokes to define several scenes: a spotted and harlequined man reaches over to kiss a woman, three riders merge with their horses in and against a densely patterned sky and ground, and four women disappear into or grow out of a field of oversized flowers.
However much these works might recall mid-century American and European modern expressionist paintings and sculptures, they do not seem to contain the existential angst of that period. Neri uses expressionist form in conjunction with the life-affirming spontaneity valued in American outsider painting and sculpture. Like outsider art, Neri’s art is marked by a kind of fearless embrace of new techniques, regardless of traditional craftsmanship or training. This is not to say that Neri is an outsider artist, because she is not, but rather that she approaches her work with an assured attitude towards experimentation. This fearlessness, and the solid sculptural forms of the works themselves, lend the simple social scenes that populate her works a kind of timeless quality that is both classic and contemporary.
Ruby Neri holds an MFA from the University of California, Los Angeles and a BFA from San Francisco Art Institute, San Francisco. She is included in the upcoming Hammer Museum exhibition Second Nature: The Valentine-Adelson Collection at the Hammer, UCLA Hammer Museum, Los Angeles, and  Bitch is the New Black, curated by Emma Gray for Honor Fraser, Los Angeles. She has exhibited work at Bay Area Now, Yerba Buena Center for the Arts, San Francisco (1997), Luckman Gallery, Los Angeles (2006) and China Art Objects (1999 & 2005). This is her first exhibition with David Kordansky Gallery.
www.davidkordanskygallery.com