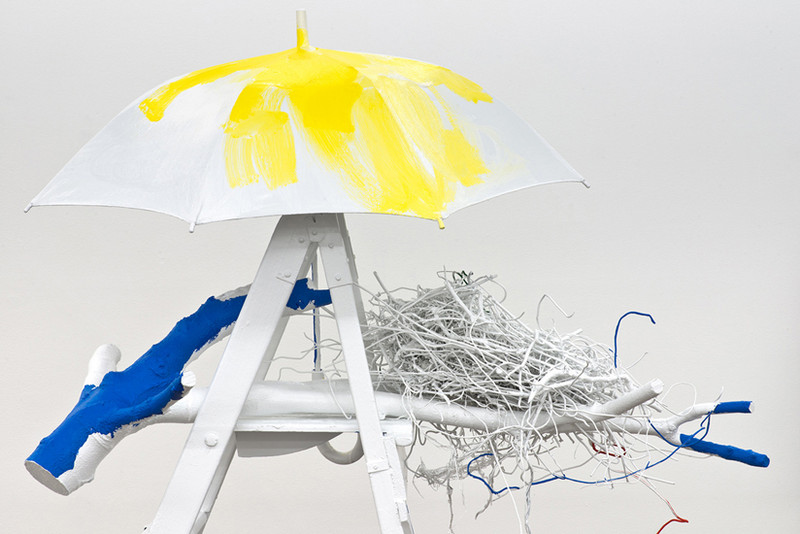 David Kordansky Gallery is pleased to announce Excess Energy, its first exhibition of new work by Scott Myles. The show will open on March 2, 2013, and run through April 20. An opening reception will be held on Saturday, March 2, from 6:00 until 9:00pm.

Myles' is a conceptually-based practice that finds material expression in sculpture, text-based works, juxtapositions of readymade objects, and installations. As a whole, the work represents a complex network of responses to social and physical infrastructures of all kinds. Most notably, these have taken shape as investigations into architecture and language, including the use of forms extracted from the municipal and cultural landscapes, as well as formal experiments that engage particular art historical lineages like gestural abstraction.

Excess Energy is an exploration of these themes with an eye turned toward the metaphorical ramifications of scarcity and overflow, economic precarity, and studio practice itself. But rather than having set out with overriding thematic concerns in mind, Myles has taken an improvisational approach, and has developed works that reflect the state of a world that veers violently between paucity and abundance, stupefied silence and unmediated chatter, logic and recklessness.

Nowhere is this more clear than in 'Habitat,' the major wall-based sculpture that functions as the centerpiece of the show. The creation of the work involved several stages, the first being the removal of the large-scale sign hanging above the entrance to the Glasgow location of the now-defunct Habitat chain, a UK-based retailer that specialized in home furnishings and design items. But the piece does not merely enact a process of appropriation––rather, the original sign has been used to make a highly-detailed 1:1 scale electro-formed copper cast. The final object reproduces with uncanny fidelity not only the Habitat logo, and the scuffs and marks that the sign accumulated over time, but the film of black plastic that covered the sign after the store closed as a kind of shroud, a melancholic symbol of economic mourning.

An abstract sculpture also makes use of material derived from Habitat-related source material. Entitled 'The Comfort of Order,' it is based upon a point-of-sale unit that Myles has deconstructed. After remaking the ten constituent elements of the original unit, he affixed them to a fabricated steel frame. A myriad of referents come to mind––including formal sculpture, built architecture, flat-pack furniture and spatial support structures––but above all Myles is concerned with creating something new, bringing about something from surplus that has been shorn of its original function. With the panels held in place by this new structure, they seem to float in space, liberated from their previous connection to commerce.

The exhibition also includes the latest of Myles' works to incorporate posters taken from Felix Gonzalez-Torres installations. If the Gonzalez-Torres works enact a kind of gift exchange by allowing viewers to literally walk away with them, Myles makes that gift his own, and reciprocates by creating a new work that appeals to new audiences. 'Silver Lining' takes shape as a flag-like form that is attached to both the floor and the wall; the poster is encased in a Perspex box tinted an acidic orange; finally, the interior of the box is used as a surface for the gestural application of mirror screen-printing ink. As such, the piece treads a fine line between formalism and topical or personal investigative processes. The choice to tint the Perspex box orange, for instance, is inspired by the blister packaging used for over-the-counter medication that Myles takes for

migraine headaches––as if the associative process of viewing (and in this case handling and literally taking) another artist's work draws towards it a host of other, previously unrelated objects that lie close at hand, and that make up the texture of everyday life.

Though objects of this kind are pervasive in the lived (i.e. non-art specific) environment, they tend to exist at the edges of the perceptual foreground. In works like his series of paper sculptures based on ELBA branded folders, Myles isolates such forms as representative of his organizational methods in the studio. Created in enlarged scale using printmaking techniques, the sculptures bring the folders into relationship with the artist's own body (their width corresponds to Myles' height), suggesting that the ordering of ideas finds a direct analogue in movement through physical space, and raising questions about the interdependent roles of containment and freedom in artistic practice.

But perhaps the primary questions raised by these works, and by the diverse activities Myles brings together in this exhibition, concern structures of language and translation, whether in the greater world of social relationships or in the cognitive space of the artist's mind. A major new text-based work addresses these themes directly. Screen-printed on aluminum, and inscribed using font and colors commonly associated with instructional signage, the words THE INK IS BLACK THE PAGE IS WHITE have been distributed across eight panels, becoming less legible as they progress. Myles has printed the text in an additive manner, so that the panel for 'WHITE,' for instance, also contains the seven words that precede it. The text is essentially written over itself, disrupting literal meaning in favor of physicality and visual power. Like all of Myles' work, the piece focuses the viewer's attention on that critical zone between poetry and action from which all human endeavor emerges.