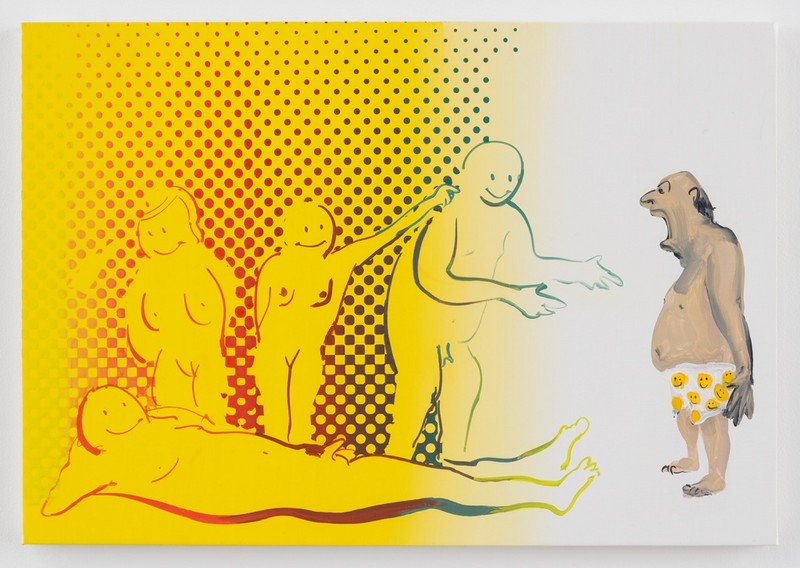 David Kordansky Gallery is very pleased to announce Smiley has no nose, an exhibition of new work by Tala Madani. This is the artist’s first solo exhibition in Los Angeles, and her first at the gallery. It will open on Saturday, July 18, 2015, at 5130 W. Edgewood Place and will continue on view through August 29. An opening reception will be held on July 18 from 6:00pm until 8:00pm.

Tala Madani makes paintings and animated videos whose indelible images bring together wide-ranging modes of critique. She uses humor not only to upend social mores, but also to open up dialogue about cultural forms that too often remain in the background of collective awareness. In so doing, she also upsets formal and art historical conventions, openly embracing caricature, gags, and disarming simplicity as she develops and hones the conceptual underpinnings of each body of work.

The paintings in Smiley has no nose take as a central motif the ubiquitous smiley face, a specific but remarkably pliable signifier whose presence in the culture can be traced back to the 1960s. Like the peace symbol, it became a bridge between the counterculture, the peace movement, and a rapidly expanding mass media, and therefore provided a fulcrum for advertisers and others who could rely on it as a form of generational shorthand. Madani has long been interested in comic books and the efficient and dramatically mutable kinds of figuration they offer, and so she approaches the smiley face with a basic question: why does this popular figure have no nose?

The mischievous, violent, abused, melancholic, and curious middle-aged men that are often the protagonists in Madani’s work offer a bevy of answers, and their attempts to figure out this conundrum expose them to a series of indignities and bacchanalian outbursts. In one large-scale painting, projectors broadcast beams of light onto the naked men’s bodies; where each beam hits their flesh or another surface it leaves behind an image of a smiley face. Such contact, if not literally tangible, transforms the blank anonymity of the faces into something intimate. For instance, in one case the smiley is projected directly over the face of one of the men, its glee transformed into a demonic overlay. And in another, it surrounds a man’s bald crown like a halo, so that this otherwise schematic circle with two dots for eyes and a curve for a mouth achieves something like religious power.

A theological turn also finds troubling expression in works that do not refer directly to the smiley itself. The painting Adoption depicts a man, reduced to the size of a child, climbing through a transparent “painting” of the Virgin Mary. As he ruptures the picture plane, it appears as though the Virgin is embracing him; he looks up at her painted visage, expecting her to return his affection. Given the themes of the exhibition as a whole, however, the yellow lines that sketchily make up the image of the Virgin also bear a resemblance to those used to draw smiley faces, suggesting that once dismantled, the smiley is mutable into other iconic images.

Throughout each of these works, Madani’s figures are involved in the drawing, redrawing, and undrawing of their surroundings and relationships. Nothing is off limits: bodily fluids, beams of light, toothpaste, i.e., any substance or object that can make a line or leave a mark is employed in acts of simultaneous creation and destruction. Occasionally the body itself is used in this way, as in a group of paintings that feature childlike characters with unmanageably massive phalluses. Always out of place, these sex organs, as well as their sheepish owners, define their environments and force any other characters in the scene to make sense of their scale and untamed power. Like the missing proboscis of the smiley face, they also conjure a host of Freudian anxieties about human biology and its symbolic ramifications, as well as broader questions about entitlement and belonging.

Madani’s ability to handle such issues head-on while engaging in technical experimentation means that she is able to absorb an array of heterogeneous influences. As a result, her approach to figuration combines the radical morphology of a modernist like Picasso with a decidedly contemporary sense of sequencing, movement, and speed. Thus her work finds some of its most powerful echoes in cartoons, cinema, and other popular durational forms. Though her images show events happening, the motives behind her characters’ actions are difficult to explain beyond physical need or animal curiosity. The work, for all of its pointed topical barbs and inventive visual vocabularies, is therefore also an open-ended document in which Madani shows how the ways we experience time, as well as what has come to be called “progress”, are beholden to inexplicable changes of heart, mind, and body.