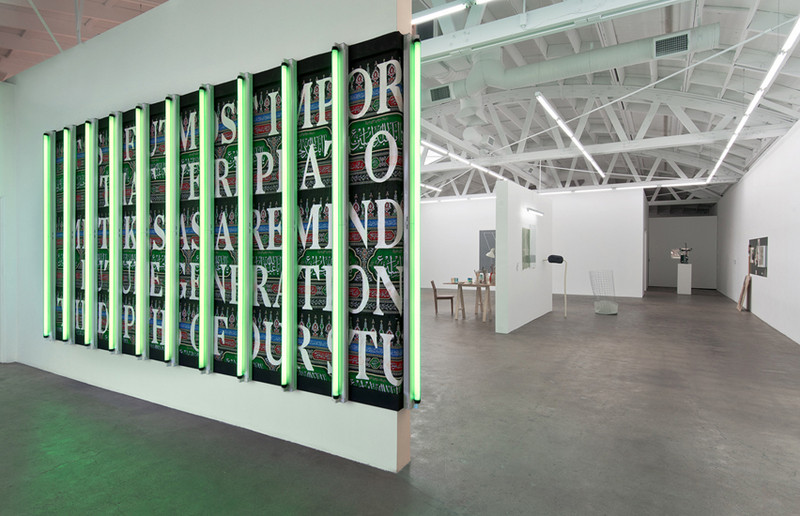 The Assistants explores the transitive potential of art, including how artworks can take on attendant guises and play assisting roles, serving as custodians of memory while also producing resistant gestures and deviant substitutions. The exhibition features new works developed specifically for this context, including several by artists who will be seen in Los Angeles for the first time, as well as a number of postwar works of historical importance that help give contour to its field of inquiry.

The latter include Adrian Piper's video The Mythic Being, 1975, and Mierle Laderman Ukeles' maintenance art event, Washing/Tracks/Maintenance: Inside, July 22, 1973, in which the role-playing of gender and labor is destabilized and typology is upended, disrupting social narrative through acts of excess and attunement that unsettle empathic identification. Everyday acts become performative moments of crisis, fear, and seduction.

Throughout the show, memory becomes corporeal, a symptom in the continuity of events. Just as the bracing guardian-like figures and spectral painting of Cathy Wilkes' work further elaborates artistic practice as a form of heightened attentiveness and strange company, Andrea Büttner's prints bear out a reverent yet roughhewn approach to catharsis through an iconographic investigation of devotion, entreaty, and loss.

Alongside such seemingly self-effacing gestures, works by Uri Aran, Matthew Brannon, Dieter Roth, and Laure Prouvost open up the transitive to a secondary register of residual composition and wayward narrative. Delving further into material transference and linguistic re-tracing, an atmosphere of genre forms, caricature, and estranged typography is encountered wherein impoverished tableaux are populated with objects and words standing in for each other, outmaneuvering references and familiarity.

Existing between behavior and function, titles and characters morph into comic hybrids that become surrogate. Equally anxious and ecstatic, works repeatedly slip into a gap of metaphysical doubt, reaching out to trip the viewer further along the path of substitution, as in Slavs and Tatars' Mystical Protest, 2011, whereby a welcoming gesture induces erasure and canny replacement.

Modes of arrival act as way stations for sentiment here, occupying a mode of transition and modification. A stand-in aesthetic of revision animates the restive, shape-shifting minimalism of Nairy Baghramian's sculptural scenography even as Rosalind Nashashibi's film Carlo's Vision, 2011, guides the viewer into an uneasy allegory of revelation and economic critique, equal parts corruption and impatient epiphany. Repeatedly exploring how the message gives way to the role of the messenger, The Assistants looks to art as a mode of direct translation and narrated difference.


Resigned to respond and generate rather than fix meaning, The Assistants are inalienable and moving within and among us, writes Walter Benjamin, "None has a firm place in the world, or firm, inalienable outlines... There is not one that is not either rising or falling, none that is not trading qualities with its enemy or neighbor, none that has not completed its time and yet is unripe, none that is not deeply exhausted and yet is only at the beginning of a long existence."1

For it is in the act of setting out, the act of seeking, in taking on the direct translation, the digging from here to an unknown elsewhere, that transmission reveals its significance. The message is secondary to the role of messenger, the task of art remains always unfinished.