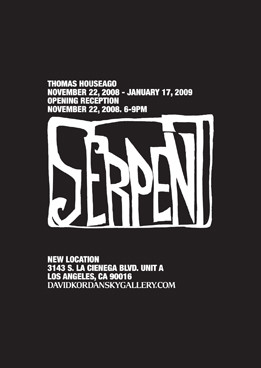 David Kordansky Gallery is pleased to present Serpent, the first U.S. solo exhibition by Los Angeles based sculptor Thomas Houseago. The opening reception will be held on Saturday, November 22nd from 6 to 9pm, and the exhibition will be on view through January 17th, 2009. Thomas Houseago's exhibition of figures, monuments and masks inaugurates a newly constructed 3,300sq foot gallery in Culver City, the permanent site for David Kordansky Gallery.
Plaster, clay, wood, hemp, bronze: these are the materials that have engaged the artist since he was a student at St. Martin's College of Art in the early 1990s. Beginning his career just as the Young British Artists were dominating the British art scene, Houseago was working with methods and materials considered outdated in the contemporary plastic arts. Instead of embracing the ready-made, he remained doggedly committed to continuing his search for meaning within a traditional medium. While others were proclaiming Modernism to be finished, Houseago's work was attesting to the fact that perhaps there was still something left to be discovered.
The title of the exhibition, Serpent, recalls a beast that has insinuated itself into thousands of years of art history, beginning with Greek mythology. During the Trojan War, Laocoön told his fellow Trojans, “Beware of Greeks bearing gifts.” He struck the giant wooden horse in their midst, and in retribution, the goddess Minerva brought forth a serpent that strangled Laocoön and his sons. This story inspired one of the great masterpieces of Hellenistic sculpture, now in the collection of the Vatican. Laocoön and His Sons came to be seen as an ideal work of art by Roman author Pliny the Elder, then later by Michelangelo (who based his Slave sculptures upon Laocoön’s sinuous, muscular form). The lineage continued through the work of classicist Winkelmann and philosopher Lessing, then through William Blake, whose Laocoön print would much later provoke satirical responses from Ad Reinhardt. Clement Greenberg’s famous essay “Towards a Newer Laocoön” made an historical argument for Modernist art and proposed that it must define itself within the limits inherent in each medium.
Houseago’s work makes an exuberant rejection of the strict specificity of Modernism. He fashions sculptures that derive from drawing and often harken back to their medium of origin with a flatness that is at once aggressive and fragile.
In making reference to the past, as well as in choice of medium, Houseago flirts with the impure and the disreputable. His carved wood totem poles are a reminder not only of early modern sculpture’s embrace of “the primitive,” but also of mass-produced tourist souvenirs. He refers to the refined sublimity of Brancusi’s bronzes and to the grotesque gigantism of public sculpture in the deserted modernist capital city of Brasilia.
In his attraction to plaster, crude and unmanageable, the artist is engaged in a sensual and physical battle with his material, a wrestling match in which the outcome of the object is always uncertain. The struggle lends his work a sense of immediacy and spontaneity. Houseago says, "For me, sculpting has everything to do with a loss of control. I live through this sensation every time I break the representation barrier. That is the uncontrollable moment in which the work either goes in the wrong direction or becomes better than I ever dared hope. That's the Frankenstein moment. It is gruesome to see your imagination turn into something physical."
Houseago’s ultimate Frankenstein creation is the exhibition’s centerpiece, a fourteen-foot tall male figure. At first sight it confronts viewers with its heavy, unwieldy and hulking forms, and yet upon closer inspection, it reveals itself to be precariously balanced and vulnerable.
Thomas Houseago was born in Leeds, England (1972), and now lives and works in Los Angeles. He attended The St. Martin's College of Art, as well as De Ateliers in Amsterdam. His recent solo exhibitions include Xavier Hufkens, Brussels, Herald St., London and The Modern Institute/Toby Webster, Glasgow, Scotland. He was included in Sonsbeek 2008, Arnhem, The Netherlands and will be featured in the upcoming publications: Taschen’s Art Now 3 and Phaidon’s Vitamin 3-D.
www.davidkordanskygallery.com