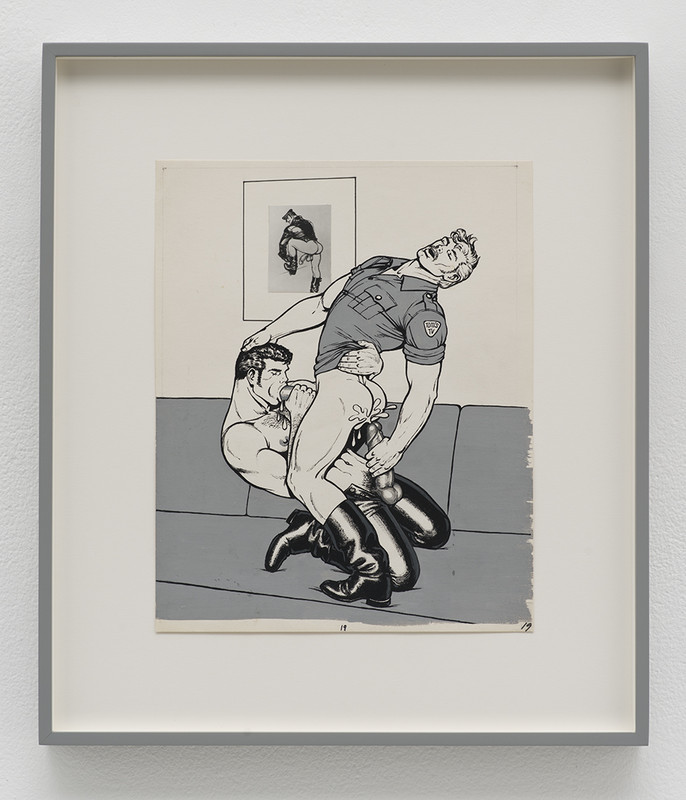 Touko Laaksonen a.k.a. Tom of Finland (1920 – 1991) is widely regarded as one of the 20th century’s most influential artists for his revolutionary representation of the male figure. His drawings of fantastically muscled men engrossed in acts of homoerotic desire comprise one of the most inventive portrayals of the human body in modern times. These pictures of gay men as virile, confident, and unashamed–equally radical for their near-illicit, underground distribution–originated an empowering queer iconography and liberating spirit that increasingly inspires popular culture.

Among the earliest works featured is a group of rare sketches from 1944 depicting clothed couples enjoying sensual trysts. The delicate fashion-illustrational style and the coifed hairstyles reflect the era, but the exposed and exaggerated genitalia, a burgeoning pre-steroid musculature, and most significantly, expressions of pride and playfulness signal Tom’s pioneering approach to sexuality. At the time, homosexuality was unequivocally taboo, if not illegal, and the dominant image of gay men was that of weakness, sickness, and effeteness. In a masterful 1947 gouache on view, Tom both flouts and acknowledges these prejudices with the depiction of a commanding, strong-jawed figure discreetly pleasuring his companion. The picture also displays an early fetish for leather and military garb, trappings Tom would adopt throughout his world as symbols of power and masculinity.

A selection of finished drawings from 1957 to 1970 further redefines archetypes. Beginning with Bob Mizer’s LA-based beefcake magazine Physique Pictorial, Tom began publishing his pictures as multi-image stories in proto-zine periodicals. To populate this expanding universe, he (predating the appropriations of punk) radically coopted working class, macho, and heterosexual identities, in particular the bikers, sailors, cowboys, and circus performers on view. Seen here idyllically cavorting, these Adonises emulate the aspiring freedoms of the decade. Each composition is charged as much with moments of looking as touching, mirroring the gaze of the viewer, and suggesting a heightened openness to the dynamics of visibility.

The exhibition’s chronology culminates in a 1972 multi-panel comic featuring Kake (pronounced KAH-keh), Tom’s recurring alter ego superhero and the original gay leatherman clone, seducing a “Tom’s TV” repairman during a house call. Published as “Kake Vol. 11 TV Repair”, one of 26 stories the artist released from 1968 to 1986, this sequence of 20 images (plus cover) comprise the final photo-ready artwork for press production. Accordingly, Tom supplants his graphite tonal gradients with the graphic, commercial art punch of pen and gouache, and the character of Kake, an easygoing if horny everyman, takes on a Sunday morning regularity. Similarly, the ecstasy of “TV Repair” is set within a conventional house with framed artwork on its walls. The artworks are photo-collaged reproductions of Tom’s own “dirty drawings”, and what is suggestively invoked is a world in which the permissiveness of Tom of Finland is a part of every living room.

An accompanying, fully illustrated catalogue, designed by Brian Roettinger and featuring an essay by Kevin McGarry, will be published in spring 2015.

Recent solo and two-person exhibitions devoted to the life and work of Tom of Finland include Sealed with a Secret: Correspondence of Tom of Finland, Postimuseu, Tampere, Finland (2014); Bob Mizer & Tom of Finland, MOCA, Los Angeles (2013); and Kulturhuset, Stockholm (2012). His work has also recently been featured in group exhibitions including Abandon the Parents, Statens Museum for Kunst, Copenhagen (2014); Keep Your Timber Limber (Works on Paper), Institute of Contemporary Art, London (2013); and We the People, Robert Rauschenberg Foundation, New York (2012). Tom of Finland’s artworks are in the public collections of The Museum of Modern Art, New York; the Los Angeles County Museum of Art; the Art Institute of Chicago; and the San Francisco Museum of Modern Art, among others.