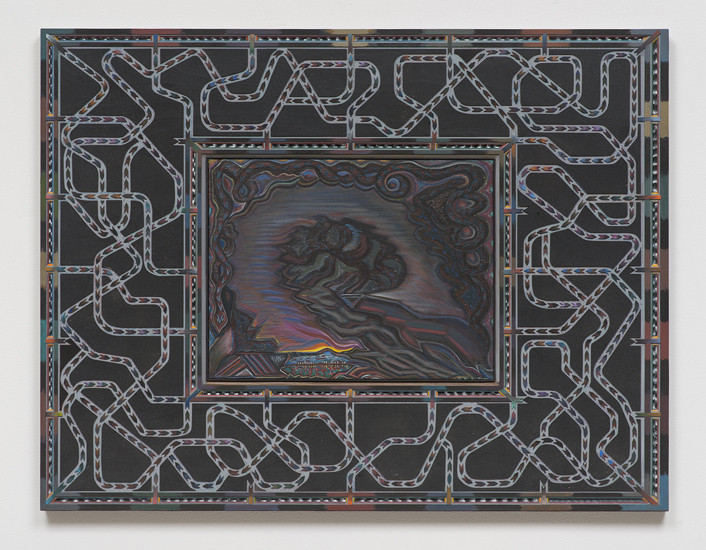 David Kordansky Gallery is very pleased to announce Echo Parked in a No Vex Cave, an exhibition of new paintings by Zach Harris. The show will run from June 29 until August 17, 2013; an opening reception will be held on Saturday, June 29, from 6:00 until 9:00pm. This is the artist's first exhibition at the gallery.

Zach Harris makes objects that fall generally under the rubric of painting but that defy any attempt at easy categorization. Neither wholly representation nor wholly abstract, each work is resolved through a combination of technique, craft, and honing of vision. Furthermore, Harris pursues an idiosyncratic and highly personal vocabulary that paradoxically allows him to engage with an array of sources drawn from numerous cultural and natural contexts.

In art historical terms, these include predecessors as diverse as the holy architectural and geometrical visions of the pre-Renaissance Sienese; the optical complexity and patterning conjured by Tibetan mandala-makers; and the interior/exterior vistas and landscapes of Americans like Charles Burchfield and Forrest Bess. In some cases these traditions reflect alternatives to the mainstream or deviations from the majority of contemporary painting practice. More importantly, however, they all emphasize that form is not merely an abstract visual language, but rather a connection between the physical world and the otherworldly realms that surround it and course through its center.

Perhaps for this reason, viewers new to Harris' paintings are often most immediately struck by the intricacy of their construction. Frames, which are an integral part of each composition, are carved, built, routed and painted, and are sculptural works in and of themselves. The paintings at their centers, meanwhile, are worked with a level of detail, representation and spatial illusion that only reveals its full extent after long periods of viewing. In Harris' case, physicality is a reflection of time: the physical frame functions as a way to prolong and intensify the viewing experience, creating puzzling shifts in consciousness as the eye is hypnotically coaxed toward a singular source of focus. In this sense too his process must be described as a traditional one, not because of its historicity, but because it eschews the rapid glance in favor of meditative, fully embodied looking.

Several of the paintings in Echo Parked in a No Vex Cave are the artist's largest to date. The increased scale allows Harris to further extend and define the peripheral field in order to engage the viewer's body as well as the eye. It also provides additional potential for experimentation with both 2-D and 3-D forms. Broad painterly gestures bring attention to flat surfaces while simultaneously alluding to deeper illusionistic spaces and calibrated color fields. The intimacy of the relationship between eye, hand, and object that is so condensed in the smaller works therefore expands to suggest resonances between the painting and the entire body.

That the level of detail remains constant regardless of scale is only further testament to Harris' commitment to developing entire worlds of hue, form, and image; indeed, the paintings are like ecosystems that evolve according to their own laws of natural selection. Distinctions between center and periphery are therefore revealed to be no more than distinctions of perspective. In some works the figure (i.e. the painting) and its surrounding environment (the frame) enter into symbiotic concert. In others, like Belvedere Torso/Finger Scales, it is the figure that defines the overall experience of seeing, relegating ideas of containment to the perceptual edge.

But it is also important to note those instances in which apparent differences between two phases (frame/painting, image/sculpture, landscape/abstraction) of the same painting are resolved by a third, namely the conscious and unconscious energies of the observer. It is this third phase in which the ecstatic brand of formalism that unites diverse artifacts of all kinds, from all phases of history and positions inside of and outside of the canon, finds its purest expression: a shared space in which artist and viewer perform analogous––if not identical––roles as instigators of order and enlightened witnesses of chaos.

Zach Harris (b. 1976, Santa Rosa, CA) was included in Made in L.A. 2012 at the Hammer Museum, Los Angeles. His work has been featured and reviewed in Artforum, The New York Times, Modern Painters, and is in the permanent collections of the Hammer Museum; the Princeton University Art Museum, Princeton, NJ; and the Santa Barbara Museum of Art, Santa Barbara, CA. Harris lives and works in Los Angeles.
www.davidkordanskygallery.com