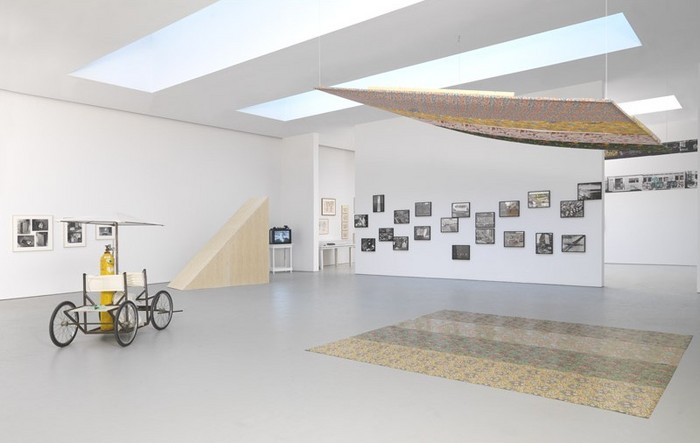 Opening on January 7, 2011, David Zwirner will present 112 Greene Street: The Early Years (1970-1974), on view at the gallery’s 533 West 19th Street space.
Focusing on Gordon Matta-Clark, the exhibition unites a group of works shown at 112 Greene Street in SoHo, one of New York’s first alternative, artist-run venues. Instigated by the artist Jeffrey Lew in October 1970 in close collaboration with Matta-Clark and Alan Saret, among others, the building became a focal point for a young generation of artists seeking a substitute to New York’s established gallery circuit, then concentrated in Midtown and the Upper East Side.
In the spirit of the early 1970s desire for experimentation and freedom of expression, 112 Greene Street was open to artists from all disciplines and did not impose censorship over their shows. In contrast to the traditional gallery space and the Modernist ideal of a white cube environment, its raw and unmediated physicality proved adaptable for an unremitting variety of creative needs.
In keeping with this flexible, fluid environment, works on display frequently emphasized organic, living qualities, and walls, floors, and ceilings could be modified to accommodate a given proposal. For Matta-Clark, the venue became a creative laboratory in which he, among other projects, dug out the basement to create a “guerrilla” garden; recycled glass bottles; papered the walls; offered channels for fresh air; turned a dumpster into an open house; and collaborated on a critique of the role of art, architecture, and language in capitalist society with the Anarchitecture Group who met weekly at the space. As art historian Thomas Crow notes, the artist “quickly moved to occupy the social and inspirational center of [112 Greene Street], as his range of artistic endeavor began to extend over a whole neighborhood (and beyond) with his repertoire of spaces, both interior and exterior, expanding all the time.” 1
112 Greene Street was a non-commercial space kept afloat by the building’s owner, Jeffrey Lew, and a small number of generous backers he convinced to support the experimental model it proposed. Its audience comprised the local community of artists who lived, worked, and performed together in the surrounding neighborhoods. The art on view, characterized by its temporal, fleeting nature, was often disposed of at the end of a show, and in general, the exhibited works had little or no market value, but captured the creativity and energy of an artistic scene that operated outside the commercial art world. Due to its many performance-based projects, the space quickly earned recognition as a leading forum for live art, and staged some of the earliest performances by Trisha Brown, The Philip Glass Ensemble, and Mabou Mines. Other significant artists who frequently presented their work at the venue included Vito Acconci, Tina Girouard, Suzanne Harris, Jene Highstein, Larry Miller, Richard Nonas, and Alan Saret.
As such, the building provided the setting for a rare, singular moment of artistic ingenuity, invention, and freedom that was at its peak between 1970 and 1974. Due to growing economic constraints and the rapid commercialization of SoHo, the venue went from being an impulsive, artist-run melting pot to a formal committee-led arts organization. Lew withdrew from the space in 1976, and three years later it relocated around the corner to 325 Spring Street under a new name, White Columns. Now situated in Chelsea, White Columns continues the not-for-profit, experimental ethos of 112 Greene Street, but its wider mission and the changed landscape of today’s contemporary art scene means its link to the earlier space is primarily of a historical significance.
The exhibition at David Zwirner brings together a number of works that Matta-Clark exhibited at 112 Greene Street, along with selected highlights by other key artists, including Girouard, Harris, Highstein, Miller, Nonas, Saret, and Richard Serra. This marks one of the first times that art shown at the SoHo venue will be exhibited together in another context, with some works shown for the first time since their original installation, and the exhibition will offer an edifying vision of the extraordinary spirit that guided their creation.
David Zwirner has been the primary representative of the Estate of Gordon Matta-Clark since 1998. Now considered to be one of the most important artists working in the 1970s, Matta-Clark was a key contributor to the activity and growth of the New York art world in SoHo from the late 1960s until his death in 1978. From 2009 to 2010, the artist was the subject of a large-scale retrospective, Gordon Matta-Clark: Undoing Spaces, which was presented at the Museo Naçional de Bellas Artes, Santiago; the Museu de Arte Moderna, São Paulo; Paco Imperial, Rio de Janeiro; and the Museo de Arte de Lima. Other recent, significant solo-shows include the exhibition Gordon Matta-Clark: You Are The Measure, which opened in 2007 at the Whitney Museum of American Art, New York, and traveled to the Museum of Contemporary Art, Los Angeles and the Museum of Contemporary Art, Chicago; and Gordon Matta-Clark, which was presented at the Museo Naçional Centro de Arte Reína Sofía, Madrid, in 2006. In 2011, Matta-Clark, along with Trisha Brown and Laurie Anderson, will be the subject of a large-scale exhibition at the Barbican Centre in London: Laurie Anderson Trisha Brown, Gordon Matta-Clark: Pioneers of the Downtown Scene, New York 1970s will be on view from March 3 to May 22.
112 Greene Street: The Early Years (1970-1974) is curated by Jessamyn Fiore, an independent curator and writer. In 2007, she became Director of Thisisnotashop, a not-for-profit gallery space in Dublin, which supported emerging artists. She also co-founded The Writing Workshop in 2007, which functions as a collaborative forum for writers and artists. Fiore assists her mother Jane Crawford, Matta-Clark’s widow, in the management of the Estate of Gordon Matta-Clark. She received a Masters from The National College of
Art and Design, Dublin, in 2010.