A point in space is a place for an argument 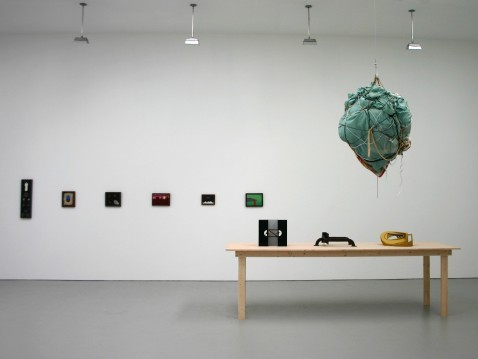 A POINT IN SPACE IS A PLACE FOR AN ARGUMENT

Opening on June 28, 2007, David Zwirner is pleased to present a point in space is a place for an argument. Deriving its title from Ludwig Wittgenstein’s seminal text, Tractatus Logico-Philosophicus, the exhibition will include a selection of works by thirty artists: Hans Accola, Lynda Benglis, Forrest Bess, Julien Bismuth, Andre Cadere, John Chamberlain, Raoul De Keyser, Vincent Fecteau, Isa Genzken, Mary Heilmann, Eva Hesse, Alfred Jensen, Mike Kelley, Rachel Khedoori, Lee Lozano, Michael Mahalchik, Gordon Matta-Clark, Paul McCarthy, Bruce Nauman, Claes Oldenburg, Joe Overstreet, Steven Parrino, Jason Rhoades, Dieter Roth, Niki de Saint Phalle, Fred Sandback, Katy Schimert, Al Taylor, Paul Thek, and Cathy Wilkes.
Wittgenstein argued an object’s existence is predicated on its situation in space; a point in a visual field must have color and a tactile object must have a degree of solidity to differentiate it from infinite space. Spanning the last five decades, the works on view present multiple modes by which artists have approached the object in space. The abstract philosophy becomes physical as artists engage the tensions of materiality, form, and function.
By the 1960s, many artists had rejected the authoritarian concept of medium specificity in favor of blurred media boundaries. Reacting to Abstract Expressionism and Minimalism, artists such as Niki de Saint Phalle defied absolute prescriptions for art-making, instead exploring the juncture of painting and sculpture. Lynda Benglis refuted the purported death of painting by seeking to redefine it. Simultaneously investigating the liquidity of paint and the role of horizontality in both process and presentation, she extended the physical limits of the medium and allowed the resulting three-dimensional pieces, such as the Day Glo Night Sherbet A, 1968, to remain seductively on the floor.
Some of the works in the exhibition challenge a hierarchy of materials, often eschewing traditional media in favor of “non-art” and quotidian materials. For example, the gravity-defying works of Al Taylor, which use broomsticks as a sculptural element, invite humor and everyday objects into the space of the gallery. The formal experiments of Vincent Fecteau employ materials historically associated with the craft tradition, including papier–mâché, burlap, and balsa wood, violating preconceptions of “high” and “low.”
Questions of materiality are furthered in works that subvert viewers’ visual understanding of mass and weight. Supported by linear steel bases, Isa Genzken’s heavy concrete sculptures have a paradoxical sense of weightlessness. Similarly, Katy Schimert’s combination of lightweight materials and sturdy construction in Untitled, 1999, gives the work the illusion of hovering above the floor. The economical forms in the paintings of Raoul De Keyser appear to concurrently fall and float off the canvas, epitomizing the dilemma of form vs. formlessness in two dimensions.
Works by Jason Rhoades, John Chamberlain, and Lee Lozano question the viable intersection of form and function. Both Chamberlain and Rhoades use furniture – specifically, a couch, as a departure point; the former stripping the domestic object down to its most basic components, leaving the viewer with the mere suggestion of its original use. Lee Lozano’s detailed notebook pages are blueprints for actions, but in the absence of referential systems, the instructions may be indecipherable.
www.davidzwirner.com