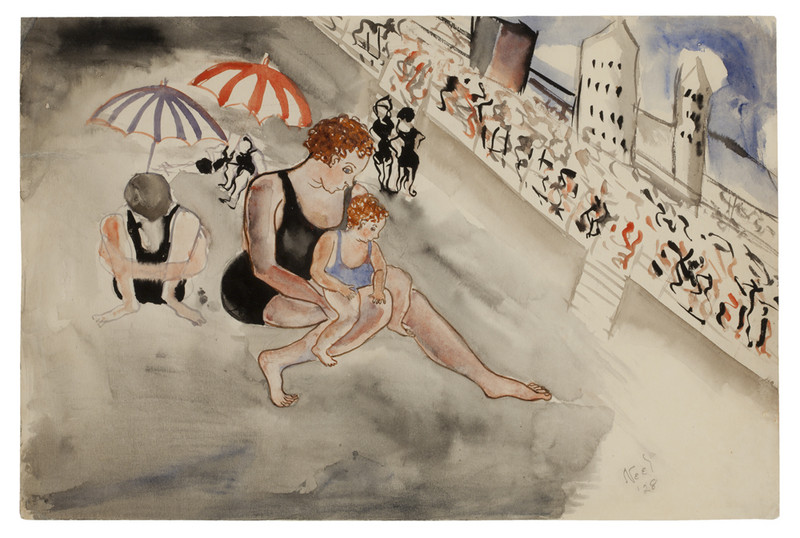 David Zwirner is pleased to present an exhibition of drawings and watercolors by Alice Neel (1900–1984). On view at 537 West 20th Street in New York, the works are selected from throughout her career and span five decades. A fully illustrated catalogue by David Zwirner Books, featuring essays by the independent curator and writer Jeremy Lewison and the award-winning novelist Claire Messud, is published to coincide with the show.

Drawing was a fundamental, stand-alone component of Neel’s practice, persistently pursued alongside painting, for which she is primarily known. As a medium, it enabled her to capture the immediacy of her visual experience—whether in front of her sitters or on the city streets—while also affording her a greater sense of experimentation and informality. As an exercise, it frequently made its way into her canvases in the form of outlines and delicately sketched backgrounds.

Neel chose the subjects for both her paintings and drawings from her family, friends, and a broad variety of fellow New Yorkers: writers, poets, artists, students, textile salesmen, cabaret singers, and homeless bohemians. Through her penetrative, forthright, and at times humorous touch, her work subtly engaged with political and social issues, including gender, racial inequality, and labor struggles. Not initially intended for public view, her drawings reveal a more private and intimate nature than her paintings and as such reflect her deep sensitivity to these subjects. Yet they are far from sentimental and she readily stripped her sitters of their masks, foregrounding rather the incongruous, the awkward, and, at times, the comical—Neel was a self-proclaimed admirer of Honoré Daumier. As Jeremy Lewison notes in his essay for the accompanying catalogue, “Unlike many of her social realist contemporaries...Neel skillfully avoided lachrymose sentiment and political hysteria....She could always find a way to get under the skin, to penetrate through to the psychological strengths and frailties of her sitters. Neel took an interest in the human condition and was as much a recorder of the contemporary American people as the celebrated photographers of the era, Walker Evans, Berenice Abbott, Dorothea Lange, Robert Frank, and Helen Levitt.”1

The exhibition provides an illuminating overview of the variety of themes and styles employed by Neel over the course of her career. While many of her earliest works on paper, along with paintings, were destroyed in rage by a former lover in 1934, those that survived testify to the influence of German artists of the period. A set of monochromatic illustrations to The Brothers Karamazov by Fyodor Dostoyevsky from the late 1930s incorporate a greater sense of narrative than many of Neel’s other compositions and show the actors at various key stages of the existential drama; her own life is referenced in often richly colored, quotidian scenes depicting herself in the company of her lovers. The single portrait occurs more frequently from the 1940s and from hence on regularly include her children Richard and Hartley, and their subsequent families. In the 1960s and 1970s, her line appears more precise and detailed and the palette more monochrome. Yet Neel’s profound commitment to her subjects and to her art remains consistent over the decades, and although the appearance of many of her sitters change over the years, there is a timeless quality to the works. As Claire Messud notes in her reflections on the artist in the exhibition catalogue, “The complex emotions Neel evokes in her art are nothing less than the contradictions of life itself.”2

Alice Neel was born in 1900 in Merion Square, Pennsylvania, and died in 1984 in New York. In 1921, she enrolled in the fine art program at the Philadelphia School of Design for Women (now Moore College of Art and Design) and graduated in 1925.

Since 2008, The Estate of Alice Neel has been represented by David Zwirner, where her work was presented in 2009 in a critically acclaimed, two-venue solo exhibition, Alice Neel: Selected Works and Alice Neel: Nudes of the 1930s (on view at Zwirner & Wirth, New York). In 2012, Alice Neel: Late Portraits & Still Lifes marked the second gallery solo show at David Zwirner, New York.

Although she showed sporadically early in her career, from the 1960s onwards her work was exhibited widely in the United States. In 1971, a comprehensive solo exhibition of Neel’s paintings was held at her alma mater Moore College of Art and Design, Philadelphia. In 1974, she had her first retrospective at the Whitney Museum of American Art, New York. It was shortly followed by a large-scale presentation of eighty-three paintings in 1975 at the Georgia Museum of Art, The University of Georgia, Athens. In 1978, the Graham Gallery, New York organized the first retrospective dedicated to the artist’s works on paper. In 1979, a survey of her paintings was co-hosted by the University of Bridgeport and The Silvermine Guild of Artists in Connecticut.

To celebrate the centenary of the artist’s birth, the Philadelphia Museum of Art organized a solo exhibition of Neel’s work, which debuted in 2000 at the Whitney Museum of American Art, New York, before traveling to the Walker Art Center, Minneapolis, Minnesota, amongst other venues. More recent posthumous solo shows include Alice Neel: Collector of Souls, Moderna Museet, Stockholm (2008) and Alice Neel: Family, The Douglas Hyde Gallery, Dublin (2011). In 2010, Alice Neel: Painted Truths, which thematically surveyed over sixty paintings spanning fifty-five years, received wide critical acclaim. It was organized by the Museum of Fine Arts, Houston in Texas and traveled to the Whitechapel Gallery, London and Moderna Museet Malmö, Sweden. In 2013, a major presentation of the artist’s watercolors and drawings, Alice Neel: Intimate Relations, was on view at Nordiska Akvarellmuseet in Skärhamn, Sweden.