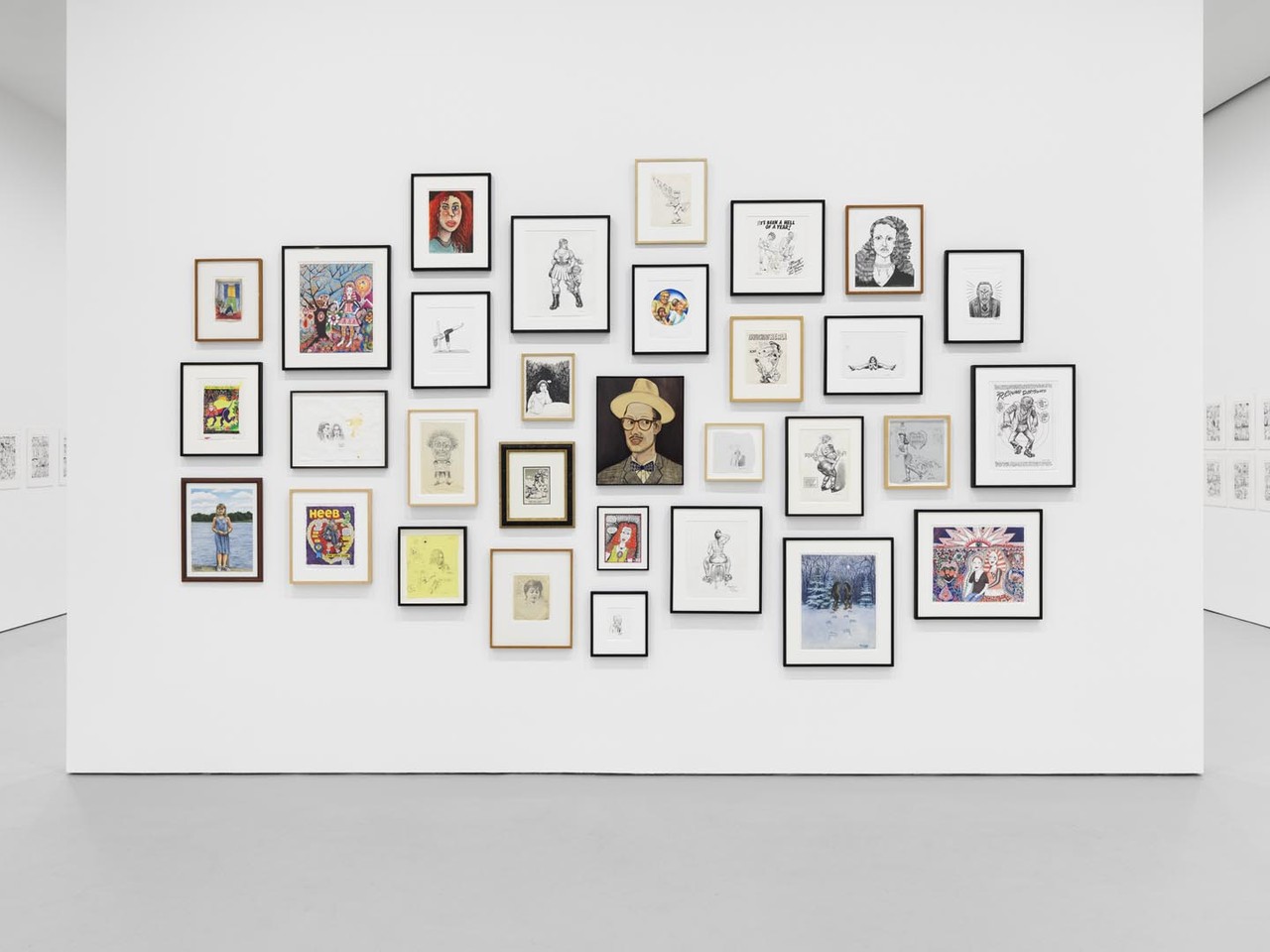 David Zwirner is pleased to present the gallery's first exhibition of the collaborative work of Aline Kominsky-Crumb and R. Crumb in its 525 West 19th Street location. Both pioneers of underground and alternative comics, Kominsky-Crumb and Crumb have created a groundbreaking portrait of their shared lives and creative collaborations over the past four decades. In their ongoing "Aline & Bob" comics, the two artists have rendered their innermost thoughts, fears, and fantasies alongside the day-to-day realities of family life in the twentieth and twenty-first centuries, each in their own distinctive style. The exhibition, a version of which was previously on view at the Cartoonmuseum Basel, will present an extensive selection of collaborative ink drawings from throughout the run of "Aline & Bob," as well as solo works by both artists in a variety of media.

By the time Kominsky-Crumb and Crumb met in 1971, they had each established themselves as foremost figures in the underground comics scene in San Francisco: Kominsky-Crumb with her autobiographical comics that appeared in the influential all-female anthology Wimmen's Comix, and Crumb with his genre-defining comic strips of the 1960s and early 1970s like Fritz the Cat, Mr. Natural, and Keep on Truckin'. Indeed, Crumb had, almost clairvoyantly, predicted their union: they were introduced by mutual friends who were inspired by Aline's resemblance to a Crumb character named "Honeybunch Kaminski." Not long after they met the two began to draw themselves and each other in joint strips and these collaborative experiments soon became a central creative endeavor for the couple, the results of which were first published in 1974 as Aline and Bob's Dirty Laundry Comics.

From the beginning, Kominsky-Crumb and Crumb have explored the possibilities of creative tension and juxtaposition in these strips. Kominsky-Crumb's more rough-hewn renderings, reminiscent of the expressionist styles of George Grosz and Otto Dix, stand alongside Crumb's finely crosshatched and exquisitely detailed draftsmanship, which draws inspiration from the classic illustrators of the late nineteenth and early twentieth centuries. These productive differences are matched, however, by a perfect melding of storytelling and humor: both artists push the boundaries with a taboo-shattering confessional mode in which their deepest anxieties and most personal thoughts are laid bare with a satirical and self-deprecating irony, at once cutting, shocking, and warmly generous.

"Aline & Bob" is a unique project within the comics world. Together, they have created a joint portrait of their lives, from the bohemia of the Bay Area in the 1970s to the south of France, where they moved permanently in 1991, and from the early stages of dating to their current roles as doting grandparents. Along the way, this indispensable document of the family has expanded to include their daughter Sophie, herself a comics artist, who has collaborated on a number of stories with her parents since 1992.

Since 1971, Aline Kominsky-Crumb has been a pioneering figure in the world of comics. Born Aline Goldsmith in Long Island, New York in 1948, Kominsky-Crumb earned her BFA from the University of Arizona in 1971. Kominsky-Crumb was one of the first contributors to the all-female anthology Wimmen’s Comix in 1971, founded the seminal comics series Twisted Sisters with Diane Noonin in 1976, and, during the 1980s, served as editor for the influential alternative comics anthology Weirdo, to which she also contributed throughout its run. A collection of work from throughout her career was published in 2007 as Need More Love: A Graphic Memoir by M Q Publications.

Previous solo exhibitions of her work include those held at DCKT Contemporary, New York (with her daughter Sophie Crumb); Art and Culture Center/Hollywood, Florida; the Museum of Comic and Cartoon Art, New York; and Adam Baumgold Gallery, New York. Her work has been published in Artforum, The New York Times, The New Yorker, Time Out New York, and numerous other magazines.

Born in Philadelphia in 1943, R. Crumb has used the popular medium of the comic book to address the absurdity of social conventions, political disillusionment, irony, racial and gender stereotypes, and sexual fantasies and fetishes. Inspired by Thomas Nast, Honoré Daumier, T.S. Sullivant, James Gillray, amongst others, his drawings offer a satirical critique of modern consumer culture, and often seem to possess an outsider’s perspective—a self-conscious stance which Crumb often relates to his personal life.

The artist’s 2010 gallery show, The Bible Illuminated: R. Crumb’s Book of Genesis, presented 207 individual black-and-white drawings from his now landmark The Book of Genesis Illustrated by R. Crumb. The exhibition was also on view at the Hammer Museum, Los Angeles, in 2009, before traveling to the Portland Art Museum, Oregon; Columbus Museum of Art, Ohio; Bowdoin College Museum of Art, Brunswick, Maine; and the San Jose Museum of Art, California. In 2013, it was presented as part of the 55th Venice Biennale, curated by Massimiliano Gioni.

A retrospective of Crumb’s work was held in 2012 at the Musée d’Art Moderne de la Ville de Paris. In 2011, his work was the subject of a solo exhibition at the Museum of American Illustration at the Society of Illustrators, New York. A major solo show devoted to Crumb’s work was organized by the Yerba Buena Center for the Arts, San Francisco, in 2007, and traveled from 2008 to 2009 to the Frye Art Museum, Seattle; Institute of Contemporary Art, Philadelphia; Massachusetts College of Art and Design, Boston; and the Grand Central Art Center, Santa Ana, California.

Work by the artist is represented in major museum collections worldwide, including the Brooklyn Museum, New York; Carnegie Museum of Art, Pittsburgh; Museum Ludwig, Cologne; and The Museum of Modern Art, New York.

In 2016, the Cartoonmuseum Basel hosted the above-mentioned major two-person exhibition, Aline Kominsky-Crumb & Robert Crumb – Drawn Together, and published an extensively illustrated catalogue. Collections and anthologies of their collaborative work include The Complete Dirty Laundry Comics (Last Gasp, 1993) and Drawn Together: The Collected Works of R. and A. Crumb (Liveright, 2012). Kominsky-Crumb and Crumb currently live in the south of France.
www.davidzwirner.com