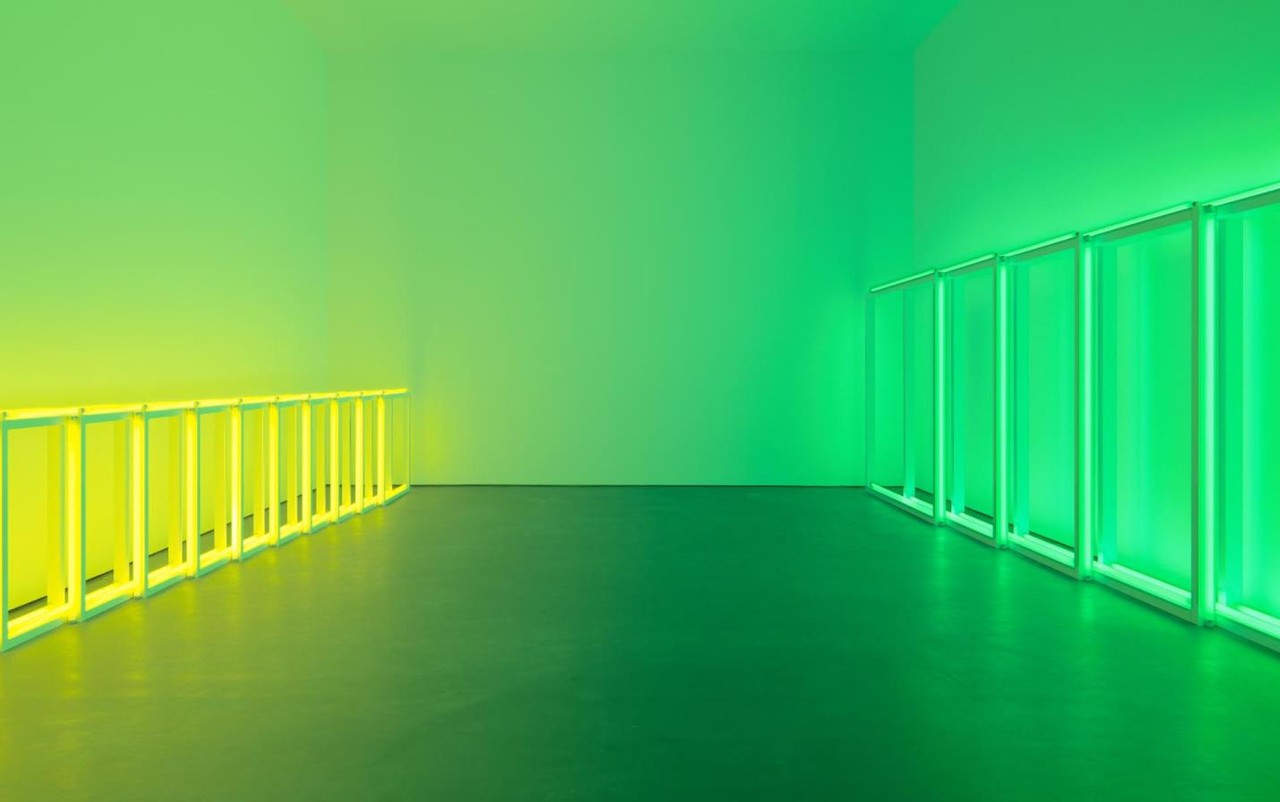 David Zwirner is pleased to present an exhibition of significant "corner," "barrier" and "corridor" works from the late 1960s and early 1970s by Dan Flavin, on view at 537 West 20th Street in New York.

From 1963, when he conceived the diagonal of May 25, 1963 (to Constantin Brancusi), a single gold, fluorescent lamp installed diagonally on a wall, until his death in 1996, Flavin produced a singularly consistent and prodigious body of work that utilized commercially available fluorescent lamps to create installations (or "situations," as he preferred to call them) of light and color.

Taking the thematically related show corners, barriers and corridors in fluorescent light from Dan Flavin (which was presented by the artist at the Saint Louis Art Museum in 1973) as a point of departure, the exhibition at David Zwirner will examine how Flavin established and redefined space through light constructions in three formats that were at the core of his practice. The artist's "corner," "barrier" and "corridor" works explicitly implicate their surrounding architecture while physically mediating the viewers' experience and perception of space.

Among the works on view will be a notable two-part "barrier" in yellow and green dedicated to his wife, untitled (to Sonja), 1969, which was first shown as Flavin's contribution to the significant group exhibition Spaces at The Museum of Modern Art, New York, in 1969-70. (Organized by Jennifer Licht, the show also included works by Michael Asher, Larry Bell, Robert Morris, Franz Erhard Walther, and the Pulsa group–who each created individual projects and "whose common interest lies in an encompassing spatial experience as the primary condition of the work of art."1) Flavin's installation comprised rectangular units of colored fluorescent tubes that formed two interior barriers that begin in the corners of the entrance wall and extend to the far end of the room, altering space with colored light and physically modifying the visitors' experience of the room. This will be the first time it has been shown since the MoMA exhibition.

Also in the exhibition will be a rare barrier that shines white fluorescent light into an empty room while rendering it inaccessible: untitled (to Dorothy and Roy Lichtenstein on not seeing anyone in the room), 1968, was first shown at the Dwan Gallery, New York, in 1968 and has not been exhibited since 1970 (when it was in Flavin's traveling solo exhibition organized by the National Gallery of Canada). The work's dedication makes reference to a 1961 painting by Roy Lichtenstein titled I can see the whole room!...And there's nobody in it!

A "corridor" in yellow and pink fluorescent light from 1972-75, untitled (to Barry, Mike, Chuck and Leonard), will also be presented. The work divides an architectural passageway into two mutually inaccessible, obstructed fields of color and light, playing on the viewers' cognitive and physical perception of distinctly colored, opposite ends of the same space.

The show will also feature a room devoted to a sequence of four related corner constructions dedicated to the artist Barnett Newman: untitled (to Barnett Newman) one-four, 1971, which highlight the four corners of the room by serially investigating the same rectangular form in different configurations of yellow, red, and blue fluorescent light. These works have not been on view in the United States since their first presentation in Flavin's 1971 solo exhibition at the Dwan Gallery, New York.

Another work in the exhibition features the artist's less-known use of circular light fixtures: untitled (to a man, George McGovern) 2, from 1972, succinctly illuminates the corners of a given space in its wall-mounted triangular construction of warm white circular lamps.

David Zwirner Books will be publishing a catalogue on the occasion of the exhibition, which will include new scholarship by Michael Auping, Chief Curator, Modern Art Museum of Fort Worth, Texas.