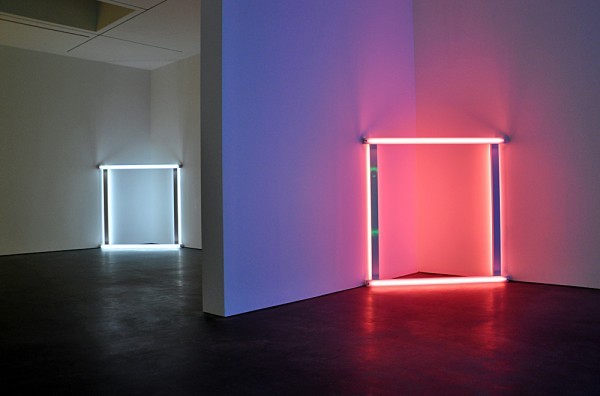 Coinciding with the gallery’s 20-year anniversary, David Zwirner is pleased to inaugurate a new five-storied exhibition and project space at 537 West 20th Street with a presentation of works by Dan Flavin and Donald Judd.

As two of the most significant American artists of the post-war period, Dan Flavin and Donald Judd’s practices have come to define what has been referred to as Minimalist art. The exhibition will present two significant installations by each artist demonstrating their visually complex understanding of space and material through the use of light and form, from Flavin’s straightforward yet dramatic use of fluorescent lamps to Judd’s highly polished aluminum constructions. The installations in this exhibition are in dialogue with each other and share a distinctive and coherent understanding of the object, the space, and the viewer.

From the early 1960s until his death in 1996, Flavin produced a singularly consistent and prodigious body of work that utilized commercially available fluorescent lamps to create installations of light and color that employed systematic compositions. This exhibition will include a series of nine works by the artist collectively referred to as “the European Couples” made between 1966-1971, all of which have the same near-square cornered configuration. Each work is composed of an 8-foot square that is one of the nine colors (excluding ultraviolet, which was not available in 8-foot lengths) of fluorescent lamps that Flavin used in his system of lights: yellow, pink, red, blue, green, warm white, cool white, daylight, and soft white. While they each stand alone as individual works, these constructions demonstrate Flavin’s interest in serial and permutational configurations. Presented together the series produces an immersive, site-situational environment of light and color, which gives a unique perspective to the architectural components of the new gallery space. The nine works are dedicated to European friends and colleagues who were influences in the artist’s life.

Judd began his practice as a painter in the late 1940s, although he soon introduced three-dimensional elements into the surface of his work. His first sculptural objects took the form of shallow reliefs, and by 1963 he had begun to create freestanding works that were presented directly on the floor and the wall. Throughout his practice, Judd used materials such as plywood, steel, concrete, Plexiglas, and aluminum and employed commercial fabricators in order to get the surfaces and angles he desired. He created declaratively simple, fundamental sculptural forms, many of which took the shape of simple “boxes” or “stacks,” which he would often arrange according to repeated or sequential progressions.

With the intention of creating work that could assume a direct material and physical presence without recourse to grand philosophical statements, Judd eschewed the classical ideals of representational sculpture to create a rigorous visual vocabulary that sought clear and definite objects as its primary mode of articulation.

The exhibition will include an untitled five-unit sculpture from 1991 that demonstrates Judd’s visionary approach to using industrial material as well as his considered attitude toward form, proportion, and installation. This work is unique within Judd’s overall practice in that it is the only incident in which the artist combined circular columns within the square format of the aluminum box. Each identically scaled freestanding box is arranged in a single row spanning across the gallery floor. Large in scale, this work relates to Judd’s interest in what curator Barbara Haskell has called his “architecturally sensitive formulation of space.”1 The interior space of each box, which is open on each side, consists of vertical cylindrical forms in different spatial configurations, yielding a dialectical tension that reflects light in different ways. Each unit is positioned exactly 30 cm (1/5 of the width of each unit) from the other allowing the surrounding natural light in the space to bring out the subtle qualities of the material and form. Moreover, it invites an ambulatory viewer, as it cannot be comprehended in its entirety from a singular point-of-view.

This exhibition will provide a rare opportunity to experience two large-scale presentations by Flavin and Judd that demonstrate both artists’ unique ability to unify form and material while incorporating—through their deliberate installation and use of light and color—the surrounding architecture into the perception of the works themselves.

About the artists:
Dan Flavin’s (1933-1996) work has been widely exhibited since the early 1960s and is currently on view in Dan Flavin: Lights at The Museum Moderner Kunst Stiftung Ludwig (MUMOK), Vienna (through February 3, 2013) and Dan Flavin: Drawing at the Kunsthalle Bielefeld (through March 3, 2013). The Estate of Dan Flavin is exclusively represented by David Zwirner. The gallery presented Dan Flavin: the 1964 green gallery exhibition in 2008 (at Zwirner & Wirth) and Dan Flavin: Series and Progressions in 2009 (at its Chelsea location).

The work of Donald Judd (1928-1994) is included in numerous museum collections. Permanent installations of the artist’s work can be found at Judd Foundation spaces in New York City, at 101 Spring Street (the newly restored building will open to the public in June 2013), and Marfa, Texas, along with the neighboring Chinati Foundation. The Judd ranch house Casa Morales is available for viewing by special appointment. Judd Foundation (Rainer Judd and Flavin Judd, Co-Presidents) is exclusively represented by David Zwirner. In 2011, the gallery exhibited a selection of works by the artist drawn from his seminal 1989 exhibition held at the Kunsthalle Baden-Baden, Germany.
www.davidzwirner.com