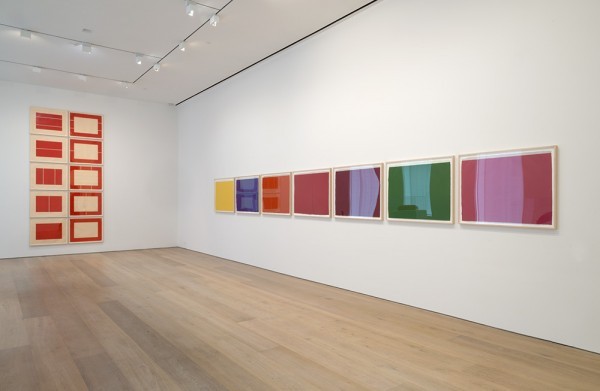 David Zwirner is pleased to present an exhibition of prints by Dan Flavin, Donald Judd, and Fred Sandback. While predominantly known for their three- dimensional works, drawing and printmaking were valued techniques that each of these artists engaged with throughout their careers. The mechanical and collaborative components inherent to the process of printmaking had clear correlations to their shared Minimal aesthetic, and it proved to be an additional medium for these artists to express their understanding of space and material. Executed between 1961 and 1994, the selection of prints on view will offer additional insight into each of the artist’s unique sculptural practices, attitudes, and concerns.

For Dan Flavin, who was himself a scholar and collector of fine and rare prints, printmaking was an integral part of his practice, and he was drawn towards the creative experimentation that it afforded. The prints in this exhibition demonstrate the same rigorous attention to color and composition as his fluorescent light installations. On view is a rare set of prints from 1994. These deeply colored cylindrically-shaped aquatints, made on round handmade paper that is curled and stitched together, have a unique sculptural presence that, like his work in fluorescent lights, experiments with color in three-dimensions.

Donald Judd utilized woodcut printmaking in the beginning of his career, and this exhibition will feature rare experimental single-sheet works from 1961.Made before the sculptural forms that he is best known for, these prints relate more closely to Judd’s early practice as a painter and are made using cadmium red oil paint. Also on view are the artist’s later prints from the 1980s and
90s—which depict a series of rectangular sheets of paper that are identical in size but vary by proportional divisions— including two sets of ten woodcuts from 1988, one in cadmium red and one in ivory black. Judd’s prints reflect the same formal and serial concerns found in the artist’s three-dimensional works.

Beginning in the 1970s, Fred Sandback created a prodigious body of lithographs, woodcuts, and etchings that make use of the conventions of print media to explore the range of spatial concerns expressed in his sculptures and related drawings. On view will be a selection of prints, including Untitled (from Four Variations of Two Diagonal Lines), 1976, that investigate the graphic forms and thematic subjects conveyed in Sandback’s sculptural works, which outline planes and volumes in space by employing wire, yarn, and elastic cord.

Dan Flavin’s (1933-1996) first solo exhibitions were held at the Judson Gallery in 1961 and the Green Gallery in 1964, both in New York. His first European exhibition was in 1966 at Galerie Rudolf Zwirner in Cologne, Germany; and in
1969, the National Gallery of Canada, Ottawa, organized his first major museum retrospective. In 2004 a major museum retrospective devoted to Flavin’s work was organized by the Dia Art Foundation in association with the National Gallery of Art, Washington, D.C.. The exhibition traveled to the Modern Art Museum of Fort Worth, Fort Worth; Museum of Contemporary Art, Chicago; Hayward Gallery, London; Musée d’Art Moderne de la Ville de Paris, Paris; Bayerische Staatsgemäldesammlungen, Pinakothek der Moderne, Munich; and the Los Angeles County Museum of Art, Los Angeles. In 2013 the Museum Moderner Kunst Stiftung, Ludwig, Vienna and the Kunsthalle Bielefeld held a solo exhibition of his work. David Zwirner has presented a number of exhibitions of Flavin’s work, including the 1964 green gallery exhibition (2008, at Zwirner & Wirth); Dan Flavin: Series and Progressions (2009, curated by Tiffany Bell); and Dan Flavin and Donald Judd, the 2013 inaugural exhibition at David Zwirner’s 20th Street location in New York.

Donald Judd’s (1928-1994) work has been exhibited internationally since the 1960s and is included in numerous museum collections. A survey exhibition of the artist’s work was organized by the Tate Modern, London, in 2004 and traveled to the K20 Kunstsammlung Nordrhein-Westfalen, Düsseldorf, and Kunstmuseum Basel. Other important exhibitions of the artist’s work include Donald Judd: Early Work 1955-1968, which traveled from the Kunsthalle Bielefeld, Germany to the Menil Collection, Houston in 2002-2003; Donald Judd: Colorist, held at the Sprengel Museum, Hannover, Germany, Kunsthaus Bregenz, Austria, and Musée d’Art Moderne et d’Art Contemporain, Nice in 2000-2001; and Donald Judd: a good chair is a good chair, a comprehensive exhibition of the artist’s furniture and related drawings that was organized by Ikon Gallery, Birmingham, England in 2010. Permanent installations of the artist’s work can be found at Judd Foundation spaces in New York City, at 101 Spring Street, and Marfa, Texas, along with the neighboring Chinati Foundation. Judd Foundation is exclusively represented by David Zwirner and in 2011, the gallery exhibited a selection of works by the artist drawn from his seminal 1989 exhibition held at the Kunsthalle Baden-Baden, Germany, and in 2013 a major installation by Judd was included in Dan Flavin and Donald Judd, the above mentioned inaugural exhibition at David Zwirner’s 20th Street location in New York.

Fred Sandback’s (1943-2003) work has been exhibited internationally since the late 1960s, and his work is represented in numerous public collections. His first solo shows were held at Galerie Konrad Fischer, Düsseldorf, and Galerie Heiner Friedrich, Munich, both in 1968. His work is on permanent display at Dia:Beacon, New York, and was the subject of an extensive survey organized in 2005 by the Kunstmuseum Liechtenstein, Vaduz (which traveled to the Fruitmarket Gallery, Edinburgh and the Neue Galerie am Joanneum, Graz, in 2006). In 2011, his work was featured in a solo exhibition at the Whitechapel Gallery, London, and the Museum of Contemporary Art, Denver, dedicated its entire building to a solo exhibition of his work. David Zwirner has shown Sandback’s work since 2004. The gallery has presented five solo exhibitions of the artist’s work, including a 2012 exhibition of important sculptures and drawings from each decade of his career at the gallery’s New York location and a 2013 exhibition at David Zwirner’s new London location. In 2014, Kunstmuseum Winterthur will host the first major retrospective of Sandback’s drawings curated by Dieter Schwarz. This exhibition will subsequently travel to the Josef Albers Museum, Bottrop and Museum Wiesbaden.
www.davidzwirner.com