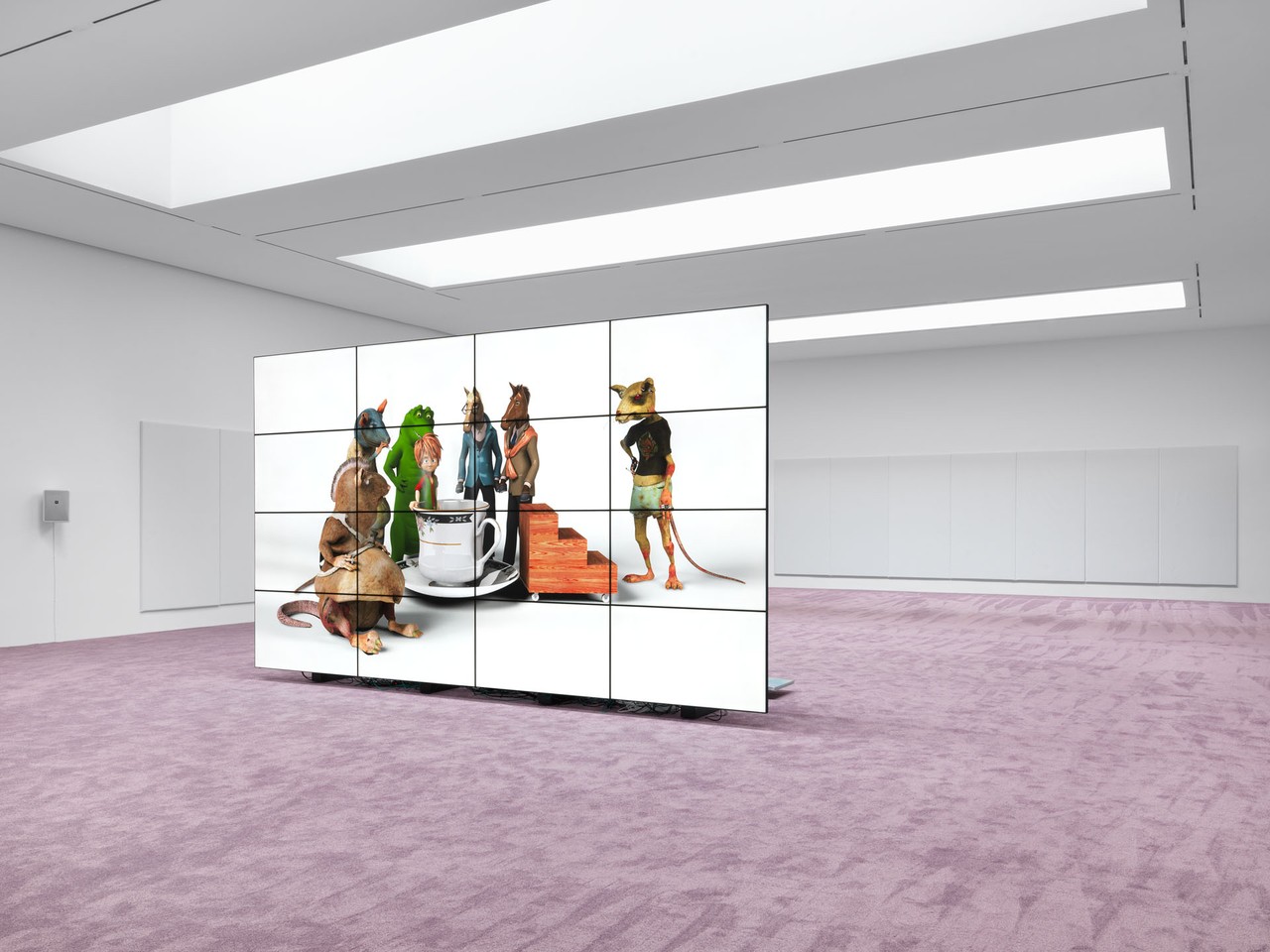 David Zwirner is pleased to present the United States premiere of Jordan Wolfson’s most recent video work, Riverboat song (2017-2018). By turns surreal, deadpan, and mischievous, Riverboat song combines computer-animated vignettes and found video clips with pop soundtracks and a monologue voiced by the artist. Since its debut at Sadie Coles HQ, London, last year, the work has been revisited and expanded by Wolfson, who has added new scenes that will be shown here for the first time. On view at the gallery’s 533 West 19th Street location, this will be the artist’s third solo exhibition with David Zwirner.

Over the past decade, Wolfson has become known for his thought-provoking works in a wide range of media, including video, sculpture, installation, photography, and performance. Pulling intuitively from the world of advertising, the Internet, and the technology industry, he produces ambitious and enigmatic narratives that frequently feature a series of invented and appropriated animated characters.

Presented across a sixteen-monitor video wall, Riverboat song revolves around one of the artist’s recurring figures, a Huckleberry Finn/Alfred E. Neuman hybrid that appeared in animatronic form in his 2016 work Colored sculpture. Opening with a seductive dance number and later delivering a cajoling and coercive address to an absent lover, this figure is but one of a disparate array of animated avatars, including a group of smoking rats, a pair of horses, and a bathing crocodile, that Wolfson employs throughout the video. The closing section of the work shows Wolfson surfing through YouTube, with clips ranging from instructional videos to a vicious brawl that served as the impetus for the artist’s 2017 virtual reality work Real violence, which was featured in the Whitney Biennial that year. In Riverboat song, as in much of his work, the artist creates an idiosyncratic juxtaposition of banality and barbarity that speaks directly to the algorithmic logic of contemporary digital culture.

Jordan Wolfson was born in 1980 in New York. In 2003, he received his BFA in sculpture from the Rhode Island School of Design. In 2013, the artist joined David Zwirner and the gallery has presented solo exhibitions of his work in New York in 2014 and 2016.

At this year’s edition of Frieze New York (May 3–6, 2018), David Zwirner will feature several new wall-mounted sculptural works by the artist in a two-person presentation alongside work by Josh Smith. Also this spring, the inaugural London presentation of Wolfson’s Colored sculpture (2016) will take place in the Tanks at Tate Modern.

Produced by Sadie Coles HQ, London, Riverboat song debuted there in 2017. The work has since been on view in solo exhibitions at Pond Society, New Century Art Foundation, Shanghai (2017) and the Schinkel Pavillon in Berlin (2018).

In 2016, the Stedelijk Museum in Amsterdam hosted a two-part solo exhibition, MANIC/LOVE/TRUTH/LOVE, a survey of Wolfson’s work that featured the animatronic sculptures Colored sculpture and (Female figure) (2014) alongside a selection of video works and objects. In 2015, the Cleveland Museum of Art held a solo show featuring two early videos by Wolfson. In 2014, a selection of his video work was shown at the McLellan Galleries in Glasgow as part of the 6th Glasgow International. Also in 2014, the artist participated in 14 Rooms, which was curated by Klaus Biesenbach and Hans Ulrich Obrist and presented during Art Basel. The exhibition was a collaboration between Fondation Beyeler, Art Basel, and Theater Basel.

In 2009, he received the prestigious Cartier Award from the Frieze Foundation, which helps an artist from outside the United Kingdom realize a major project at Frieze Art Fair in London.