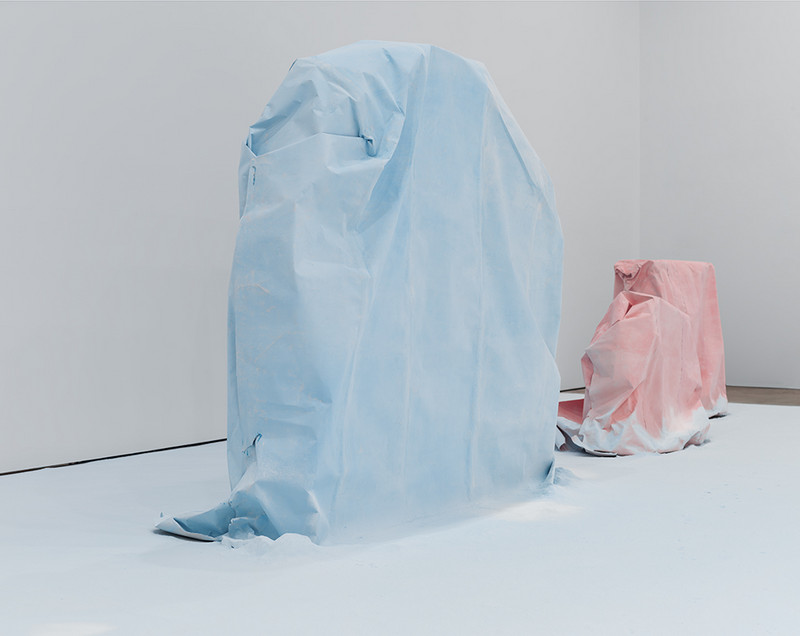 David Zwirner is pleased to present its first exhibition with Karla Black. On view at 519 West 19th Street in New York, the Glasgow-based sculptor presents a large-scale powder floor and a cellophane window, both made specifically for the space, as well as hanging and standing works made from paper.

Black creates abstract sculptures using a combination of everyday materials including powder, soap, gels, and pastes, along with more traditional media such as plaster, chalk, paint, and paper. Carefully arranged on the floor or suspended from the ceiling, they are typically made on site and include direct evidence of the process of their creation through fingerprints and dust. Delicate, messy, sensuous, and visceral, they testify to a physical experience of the world that lies beyond metaphorical and symbolic references. Poised between form and anti-form, they emerge like transitional states or naturally occurring sediments.

For this show, Black uses the main floor space to create a powdered environment featuring several individual sculptures. At once momentous and ephemeral in appearance, it comprises a monotone blue section towards the back and a white and pink striped area at the front, above which hang 340 strands of Sellotape. Their glistening transparency, which is regularly interrupted by the artist’s visible fingerprints, is animated by light and stands in contrast to the opaqueness of the powder. Both are complemented by chalked paper sculptures; crumbled volumes that seem as if they float in air or could topple over at any moment. Yet despite the uncertain physicality of these works—their shapeless, loose formations and arbitrary surfaces—they have a strong sculptural presence and materiality. As the art historian Briony Fer notes, in Black’s practice “[s]culpture is redistributed along an axis that dissolves structure through the twin operations of transparency and pulverization.”1

A cellophane sculpture at the entrance of the gallery space forms a “window” into the room. Innumerous creases alternately reflect and refract light, continuously shifting attention between themselves and the surrounding space. Rather than contradictory, the immaterial and the material coexist in Black’s work, as do the readymade and the handmade, the elaborate and the simple, the decorative and the raw, amongst other seeming opposites. They come together to create a highly personalized version of contemporary sculpture, and by extension, of art itself.

Karla Black was born in 1972 in Alexandria, Scotland. She received her B.F.A. in sculpture in 1999 from the Glasgow School of Art, followed by her M.F.A. in 2004. She currently lives and works in Glasgow.

Since the early 2000s, Black’s work has been the subject of solo exhibitions at prominent institutions, including a presentation of new sculptures on view in 2013 at the kestnergesellschaft in Hanover, Germany. In 2013, her first museum show in the United States was hosted by the Institute of Contemporary Art in Philadelphia. Other venues which have presented recent solo exhibitions include the Gemeentemuseum, The Hague (2013); Dallas Museum of Art; Gallery of Modern Art, Glasgow; Schinkel Pavillon, Berlin (all 2012); Kunsthalle Nürnberg, Nuremberg,Germany (2010); Migros Museum für Gegenwartskunst, Zürich; Kunstverein Hamburg, Germany; Modern Art Oxford, England; and the Inverleith House, Royal Botanic Garden Edinburgh (all 2009).