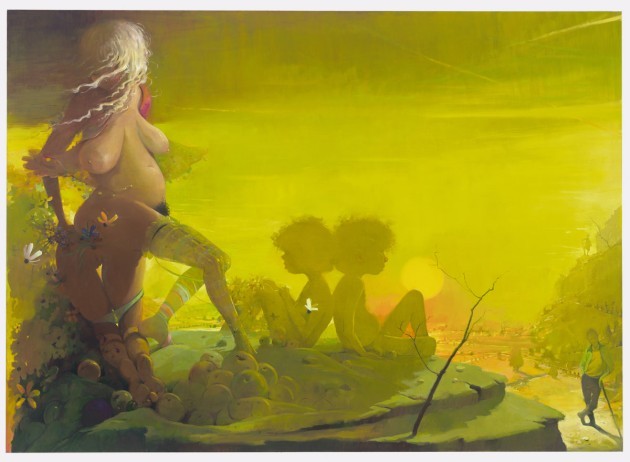 David Zwirner is pleased to present an exhibition of new paintings by Lisa Yuskavage, on view at the gallery’s 519 West 19th Street space. This will be the artist’s third solo show since her first exhibition at the gallery in 2006. Over the past two decades, Yuskavage has developed her own genre of the female nude: lavish, erotic, cartoonish, vulgar, angelic young women cast within fantastical landscapes or dramatically lit interiors. They appear to occupy their own realm while narcissistically contemplating themselves and their bodies. Rich, atmospheric skies frequently augment the psychologically-charged mood, further adding to the impression of theatricality and creative possibility.
For this exhibition, Yuskavage takes her complex narratives to a larger scale, whose sheer vastness adds a cinematic component to the works. More so than previously, this new body of work appears to merge the genres of landscape, still life, and portrait painting. Despite their immediacy, the plots reveal themselves slowly over time. Her compositions are equally prolonged: the terrains are more spacious and more intricately articulated than in previous works, which heightens a sense of realism while at the same time dismantling easy construction of meaning.
The exhibition includes the three-part Triptych, the first time the artist has worked in this format. A nude girl lies on a table in the central panel with her legs spread apart; beneath her, a chaotic heap of pots and measuring tools have been left on the ground long enough for weeds to begin to take hold. The limp, explicit frontality of the girl’s body recalls the trancelike nude in Marcel Duchamp’s Étant donnés—both headless, the women succumb to voyeuristic gazes within a sumptuous landscape and the viewer becomes the accomplice. In the background of the central and right panel of Triptych, several stern-looking female figures, dressed as nineteenth-century babushka-wearing Russian peasants, emerge covered from head to toe. They seem to embody the dichotomy that often exists in the artist’s canvases between liberation and interdiction; rationality and irrationality; the id and the super-ego. The triptych format adds an additional, unknown dimension to the narrative and the individual panels seem at once self-contained and dependent on one another. The format was developed intuitively; as Yuskavage notes, the figurative elements “constantly kept arranging themselves in tripartite structures; either triangles or triads.”1
Yuskavage’s oeuvre bears witness to a re-emergence of the figurative in contemporary painting and takes its point of departure in part in the immediacy and tawdriness of contemporary life spurred by the mass media and the psycho-social realm of the individual. Her works are characterized by an ongoing engagement with the history of painting and her approach to the female nude can in particular be seen as a response to the traditional depiction of saints and withes, shown predominantly as lustful, aggressive characters confined to the margins of cities.
Such representations form a comparison to Yuskavage’s own eccentric figures, who seem to be exultant outlaws of society. In Outskirts, for example, the overt erotic nature of the subject matter is set in relief by the central silhouettes of two children, who seem to occupy a neutral zone between the nude girls and a traveller. The mood appears at once tender and provocative while the dramatic light and intense color scheme vie with the characters for unlocking the painting’s narrative. As with Yuskavage’s work in general, it hovers between the subconscious and the conscious, and ultimately, between fiction and reality.
Born in 1962 in Philadelphia, Lisa Yuskavage received her B.F.A. from the Tyler School of Art, Temple University, in 1984 and her M.F.A. from the Yale School of Art in 1986.
Concurrent with her show at David Zwirner, the artist’s work is included in a solo exhibition at The Royal Hibernian Academy, which forms part of Dublin Contemporary 2011, Terrible Beauty: Art, Crisis, Change & The Office of Non-Compliance, curated by Jota Castro and Christian Viveros-Fauné (on view from September 6 to October 31).
Yuskavage will also present a new pastel drawing made specifically for the historic Earlsfort Terrace exhibition site. Over the past decade, Yuskavage has been the subject of solo exhibitions at a number of prominent institutions worldwide, including the Museo Tamayo Arte Contemporáneo, Mexico City (2006); Royal Academy of Arts, London (2002); Centre d’Art Contemporain, Geneva (2001); and the Institute of Contemporary Art, Philadelphia (2000).
Work by the artist is held in major museum collections, including The Art Institute of Chicago; Hirshhorn Museum and Sculpture Garden, Washington, D.C.; Museum of Contemporary Art, Los Angeles; The Museum of Modern Art, New York; San Francisco Museum of Modern Art; Stedelijk Museum, Amsterdam; Walker Art Center, Minneapolis, Minnesota; and the Whitney Museum of American Art, New York. She lives and works in New York.