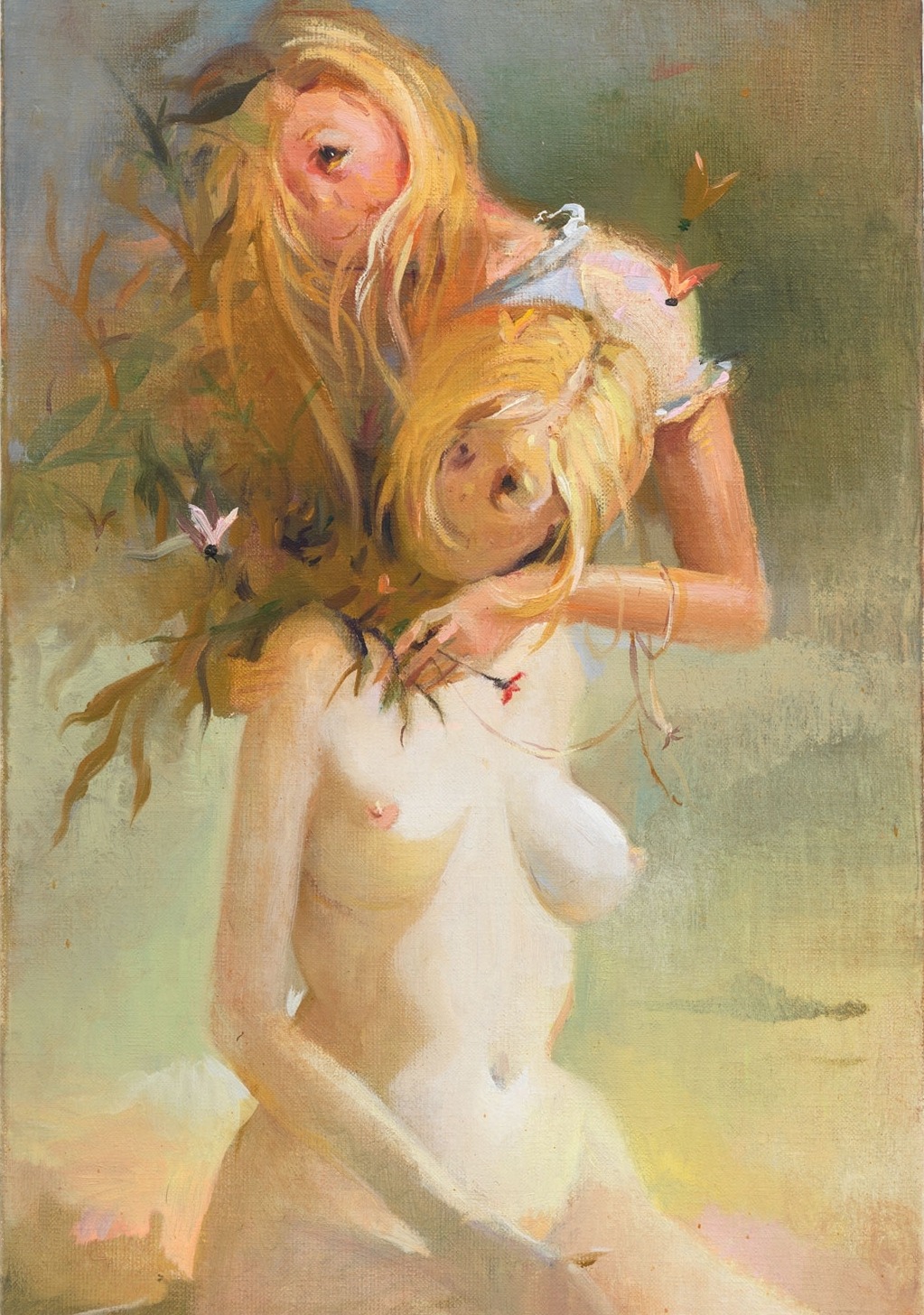 David Zwirner is pleased to present concurrent exhibitions of work by Lisa Yuskavage at the gallery’s 533 West 19th Street and 34 East 69th Street locations in New York. On view in Chelsea will be the first survey of the artist’s small-scale paintings, which have been a constant and integral part of her oeuvre since the mid-1980s. In the uptown gallery, an exhibition of eight new large paintings will be shown.

For more than thirty years, Yuskavage’s highly original approach to figurative painting has challenged conventional understandings of the genre. Her simultaneously bold, eccentric, exhibitionist, and introspective characters assume dual roles of subject and object, complicating the position of viewership. At times playful and harmonious, and at other times rueful and conflicted, these characters are cast within fantastical compositions in which realistic and abstract elements coexist and color determines meaning. While the artist’s painterly techniques evoke art historical precedents, her motifs are often inspired by popular culture, creating an underlying dichotomy between high and low and, by implication, sacred and profane, harmony and dissonance. Yet her oeuvre compellingly resists categorization, insisting instead on its own kind of emotional formalism in which characters and pictorial inventions assume equal importance.

Consisting mostly of loans, the extensive presentation in Chelsea of Yuskavage’s small paintings spans key examples from her most important series to date and includes many works exhibited for the first time. Some are studies for large paintings, others revisit the large canvases, and yet others are one-of-a-kind compositions that only exist on an intimate scale. As places for experimenting with color, form, and characters as well as a variety of supports—including stretched and unstretched linen, canvas boards, wood, and paper—they play a remarkably dynamic and protean role within her work and continuously inspire new pictorial developments.

Variously and often concurrently based on the artist’s imagination, maquettes, live models, and found and staged photographs, the small paintings demonstrate Yuskavage’s methodical exploration of how and from where to generate images. In Blonde Jerking Off (1995), a prime example from her early series Babies, a woman’s body materializes from monochrome mist with no counterpart in reality, her hyperbolic features animated by notions of shame and shamelessness alike. Both line and color are further exaggerated in the Bad Habits works from the mid-1990s, for which the artist used sculpted maquettes set on small stages. Her Penthouse series, started around the same period, takes its point of departure in found photographs, at once adopting and subverting expectations of pornographic imagery. Works like Screwing Her Pussy on Straight (1997) epitomize this tension by upending the expected power dynamics between an observer and a nude model. By contrast, the woman depicted in Grey Bedroom (2002) from the Northview series was based on staged photos of a childhood friend, Kathy, modeling semi-nude in a lush boudoir. The impression of solitude is enhanced by the color palette, which is deployed independently of mimetic space. Painted from a combination of found and imagined sources, the slapstick Pieface works, begun in the late 2000s, revolve around a sense of humiliation, but the recipient is unclear. Ultimately, what drives Yuskavage’s experimentation with a variety of processes throughout these series is the fundamental question of what constitutes a model.

A group of new large paintings depicting mostly couples will be exhibited in the gallery uptown, a townhouse space that emphasizes their predominantly domestic and intimate scenes. These charged depictions of interdependent male and female figures developed out of Yuskavage’s series of Symbiotic portraits from the early 2000s in which two women were paired to invoke a sense of a dual manifestation of a single personality. In Home (2018), a dilapidated barnyard door complicates an otherwise serene interior, as if representing a gateway between the conscious and unconscious mind, a recurring dichotomy within the artist’s oeuvre. The silver and gold palette gives way to a full spectrum of color in the background, creating an impression of harmony that is further emphasized by the couple’s interlocking hands in the exact center of the composition.

A conflicted atmosphere is suggested in Golden God (2018) in which a pale woman is draped over the shoulders of a man who emerges from the same opaque yellow and violet hues as the background. While the transparent orb around his neck evokes the iconography of religious figures, here it seems to occupy a bridge between real and imaginary worlds. The work can be seen as a variation on the Death and the Maiden theme which recurs within many of Yuskavage’s symbiotic portraits and underscores a parasitical, rather than mutualistic dynamic. In Self Portrait (2017), conversely, dramatic light contrasts enhance the sense of dualism, creating a psychological space in which the two figures appear as both opposites and the same. As Christopher Bedford has noted on Yuskavage’s works more generally, "the formal and conceptual value of color [is] both synonymous and unequivocal. . . . [To] understand the painting is not to understand a story represented, but instead to understand the very means of representation."1

Born in 1962 in Philadelphia, Lisa Yuskavage received her BFA from the Tyler School of Art, Temple University, in 1984 and her MFA from the Yale University School of Art in 1986. Since 2005, the artist’s work has been represented by David Zwirner. In 2006, two solo exhibitions were concurrently presented at David Zwirner and Zwirner & Wirth, New York, followed by presentations at the gallery in 2009, 2011, 2015, and 2017. The present two-part exhibition marks her sixth gallery solo show.

In 2015, The Rose Art Museum of Brandeis University in Waltham, Massachusetts, presented Lisa Yuskavage: The Brood, a major solo exhibition spanning twenty-five years of the artist’s work. The show traveled to the Contemporary Art Museum St. Louis in 2016. A large-scale, comprehensive publication by Skira Rizzoli, published on occasion of the exhibition, created in close collaboration with Yuskavage, includes texts by renowned art historians, curators, and writers including Christopher Bedford, Suzanne Hudson, Catherine Lord, and Siddhartha Mukherjee, as well as an interview with the artist by Katy Siegel.

In 2020, The Baltimore Museum of Art and the Aspen Art Museum will co-organize a solo presentation of the artist’s work.