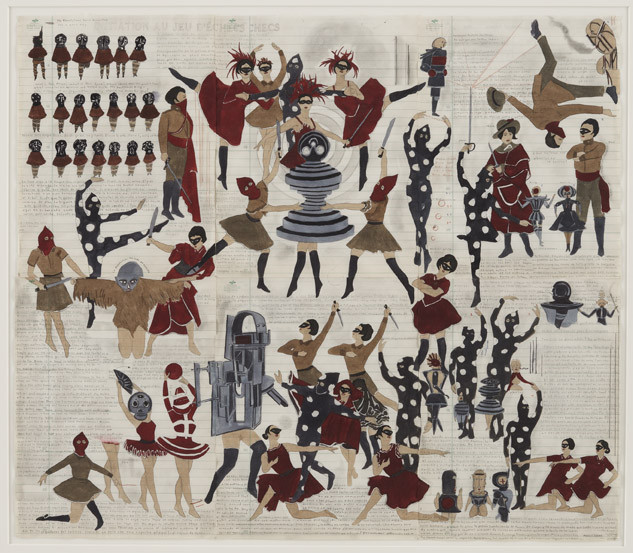 David Zwirner is pleased to present a solo exhibition of new work by Marcel Dzama, on view at the gallery’s 525 West 19th Street space. The exhibition will feature the artist’s film, A Game of Chess, alongside related drawings, sculptures, and dioramas.
Dzama has become known for his prolific drawings, which are characterized by their distinctive palette of muted browns, grays, greens, and reds. In recent years, the artist has expanded his practice to encompass three-dimensional work and film and has developed an immediately recognizable language that draws from a diverse range of references and artistic influences, including Dada and Marcel Duchamp.
Dzama’s film features characters based on the classic game of chess. Dressed in geometrically designed costumes of papier-mâché, plaster, and fiberglass and wearing elaborate masks (including a quadruple-faced mask for the King), the figures dance across a checkered board to challenge their opponents in fatal interchanges.
Chess occupied a central role for the early twentieth-century avant-garde, who drew explicit analogies between the game (with its intricate balance between improvisation and predetermination) and artistic practice. Dzama is influenced by German Bauhaus artist Oskar Schlemmer, whose Triadic Ballet from 1922 included puppet-like, costumed, and mask-wearing figures dancing across a checkered surface. French film-maker René Clair and painter Francis Picabia were amongst other artists who integrated ballet and chess in their works from the 1920s, employing the special set of rules and moves of the game as metaphors for larger questions regarding free will, destiny, and technological determinism.
Both the filming and the creation of the costumes for A Game of Chess were carried out in Guadalajara, Mexico, and the influence of local crafts and religious traditions can be felt throughout this body of work. Notions of scapegoatism and resurrection blend with the timeless idea of rivalry represented by the game, and distinctions between reality and fiction ultimately become blurred as both costumed and “real-life” characters in the film are killed. The storyline in this way recalls the Surrealist predilection for dream logic over conventional narrative form—epitomized by Luis Buñuel’s films from the late 1920s and early 1930s. However, Dzama still retains a strong sense of a plot, with subtle insinuations to contemporary life discernible throughout.
The exhibition will also present rotating sculptures based on central characters in the film, as well as a mechanized carousel with puppets made from tin and ceramics. Upon entering the exhibition, visitors will first encounter Dzama’s drawings and a room of sculptures before reaching the film installation. This gradual, three-tiered transition from flat, wall-mounted works, via rotating sculptures, to moving images coincides with a shift from light, quiet spaces to the darkened area of the film with its accompanying acoustics. Further emphasizing this contrast, a mariachi band will stage a live performance of music inspired by the film’s soundtrack on the exhibition’s opening night and at selected times throughout its duration.
An exhibition catalogue, designed in collaboration with the artist in the format of a small sketchbook, will be published on the occasion of the show. The publication will include drawings, storyboards, dioramas, and film and production stills from the making of A Game of Chess.
Marcel Dzama was born in 1974 in Winnipeg, Manitoba, Canada. In 2010, his work was the subject of a solo exhibition at the Musée d’Art Contemporain de Montréal, Canada, which will travel to Oakville Galleries, Oakville, Canada (2011) and the Dalhousie Art Gallery, Halifax, Canada (2012). Other recent solo and group shows include those organized by The Museum of Modern Art, New York (Compass in Hand: Selections from The Judith Rothschild Foundation Contemporary Drawings Collection, 2009 and The Compulsive Line: Etching 1900 to Now, 2006); Pinakothek der Moderne, Munich (2008, solo); the Irish Museum of Modern Art, Dublin (Order, Desire, Light, 2008); and the 2006 Whitney Biennial, Whitney Museum of American Art, New York. The artist’s work will be featured in upcoming solo exhibitions at the Gemeentemuseum, The Hague, The Netherlands (March - June, 2011); Kunstverein Braunschweig, Germany (September - November, 2011); and the Contemporary Art Museum, Guadalajara, Mexico (2011). The artist lives in Brooklyn, New York.
www.davidzwirner.com