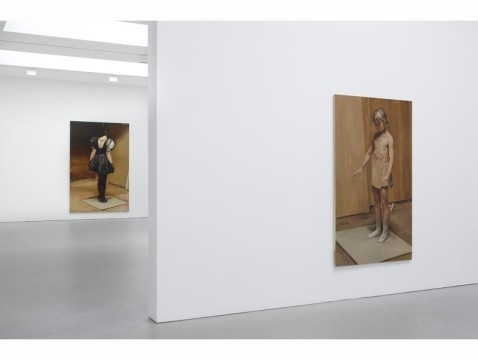 David Zwirner is pleased to present an exhibition of new works by Michaël Borremans, The Devil’s Dress, on display at the gallery’s 525 West 19th Street space.
Borremans’ drawings, paintings, and films present an evocative combination of solemn-looking characters, unusual close-ups, and unsettling still lifes. There is a theatrical dimension to his works, which are at once highly staged and ambiguous, just as his complex and open-ended scenes lend themselves to conflicting moods – at once nostalgic, darkly comical, disturbing, and grotesque.
His paintings display a concentrated dialogue with previous art historical epochs, yet their unconventional compositions and curious narratives defy expectations and lend them an indefinable yet universal character.
This exhibition, the artist’s fourth solo show at the gallery, brings together paintings and a three-part work on paper that each seems like a variant of a shared theme. Lone figures in pensive or semiconscious states are depicted squarely in the center of the compositions; while their faces are mostly obscured, a psychologically-charged mood prevails.
Some are positioned within barren spaces reminiscent of an artist’s studio with planks or canvases arranged against walls, while others are portrayed luminously against dark, monochrome backgrounds. Titles provide simple but uncertain descriptions, which offer little help for unlocking the narratives.
In The Knives, Borremans depicts a woman with her head bent downwards. Several tears in her tightly-closed jacket are visible and may refer to a preceding act of cutting or stabbing, as hinted at by the title. Yet the gap between what is suggested and the visual information that is made available is amplified by the elusiveness of the woman’s face, with her hidden gaze standing in for illegibility—a characteristic which recurs throughout Borremans’ work. The bright light which illuminates her from an invisible source is stylistically reminiscent of Old Master paintings and here intensifies the uncanniness of the scene and the unembellished, austere mood Borremans often pays detailed attention to clothes and textiles, as evidenced throughout the exhibition. Fabric folds sometimes appear like visual representations of convoluted mental states and the clothes, themselves, seem to transform their wearers into sculptural forms. In The Devil’s Dress, a male figure lies limp on a hard floor, nude except for a stiff red “dress” wrapped around him like a coffin; the title of another work, The Wooden Skirt, denotes the material of a nude-colored short skirt worn by a child, who seems spellbound and immobile.
As with Borremans’ work in general, such paintings emphasize the tension between representation and empirical reality and point, by extension, to the impossibility of transparent, unmediated perception. As if a comment on the longstanding debate about art’s approximation to life, which has been given new significance in the past century with the implementation of photo-based imagery in the mass media, his works refuse to adopt a hierarchy between the real and the imaginary.
Over the past decade, Borremans’ work has been the subject of solo exhibitions at a number of prominent institutions, most recently in 2011 with the comprehensive solo show Eating the Beard, which was first on view at Württembergischer Kunstverein Stuttgart and traveled to Mú ́csarnok Kunsthalle, Budapest, and Kunsthalle Helsinki. In 2010, he had a solo exhibition at the Kunstnernes Hus in Oslo as well as commissioned work on view at the Royal Palace in Brussels. Other solo exhibitions include kestnergesellschaft, Hannover (2009); de Appel Arts Centre, Amsterdam (2007); La maison rouge, Paris (2006); Kunsthalle Bremerhaven, Germany; and the Museum für Gegenwartskunst, Basel (both 2004). In 2005, he had a one-person exhibition of paintings and drawings at the Stedelijk Museum voor Actuele Kunst (S.M.A.K.), Ghent. The paintings then traveled to Parasol unit foundation for contemporary art, London, and The Royal Hibernian Academy, Dublin, while the drawings traveled to the Cleveland Museum of Art, Ohio.
Work by the artist is held in numerous public collections internationally, including The Art Institute of Chicago; High Museum of Art, Atlanta, Georgia; The Israel Museum, Jerusalem; Musée d’Art Moderne de la Ville de Paris; Museum of Contemporary Art, Los Angeles; Museum of Fine Arts, Boston; The Museum of Modern Art, New York; National Gallery of Canada, Ottawa; San Francisco Museum of Modern Art; Stedelijk Museum voor Actuele Kunst (S.M.A.K.), Ghent; and the Walker Art Center, Minneapolis, Minnesota. He lives and works in Ghent.
www.davidzwirner.com