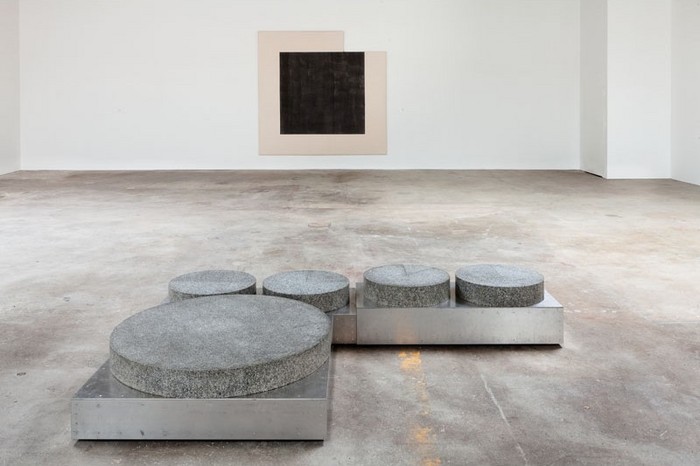 David Zwirner is pleased to present a selection of works from the 1960s and 70s by American artist Michael Heizer (b. 1944) at the gallery’s 519 West 19th Street space.
As a pioneer of the 1960s Land Art movement, Heizer has created a prolific and ambitious practice encompassing painting, sculpture, and large-scale earthworks. His paintings and sculptures, which he has produced intermittently throughout his career—manifest many of the ideas explored in his monumental works—which use land as a material form. Bringing together rarely seen paintings and sculptures from the 1960s and 70s, this exhibition reveals Heizer’s early engagement with the contrasting qualities of negative and positive forms.
Heizer moved from California to New York City in 1966, where he began his career as a painter. He was attracted to the concepts and aesthetics of what is now referred to as Minimalism, and his practice during this period was in close dialogue with that of the artists he befriended, such as Carl Andre, Dan Flavin, Frank Stella, Walter de Maria, and Tony Smith. By the late 1960s, Heizer had left the constraints of New York City for the deserts of California and Nevada, where he could create large-scale works that did not conform to the institutional and commercial boundaries of museums and galleries. It is in these empty deserts that he created some of his most impressive and laborious earthworks, among them Double Negative (1969-70). Inspired by Egyptian, Incan, and Mayan architectural ruins—which his father, an archeologist, exposed him to at a young age—Heizer’s earthworks often employ depressions and trenches in the ground as a means of addressing displacement and space. A prominent feature in the artist’s oeuvre has been his preoccupation with the opposing relationship between presence and absence (or form and void), an idea that originated with Heizer’s earliest paintings, and which is clearly pronounced in many of his renowned earthworks.
With an emphasis on reevaluating the relationship between positive and negative forms, as well as the confrontation between mass and space, Heizer’s output focuses on the tension that occurs when these juxtaposing elements are presented together; his paintings and sculptures reflect this complexity. The periods in which Heizer has concentrated more on studio production mark an intensely important stage in his artistic formulations, as he has used painting and sculpture as a way of working through his interest with mass and emptiness in various proportions. As Ellen Joosten suggests, Heizer’s studio works “are by no means ‘relaxations’ between the great earthworks, but rather [represent] periods of tremendously intense involvement in the formation of [the] questions that are engaging him.” 1
In his paintings, Heizer mostly uses hues that are associated with the colors of the desert (dark ochre, olive green, mauve, and slate grey), which he rolls over the canvas in large, rapid gestures, sometimes covering the entire surface and in other cases creating a transparent layer of color. This technique creates a positive and negative surface in which the transparent mass simultaneously frames and demarcates the empty canvas, thereby drawing attention to the presence and absence of space in relationship to mass and color. This method, which is clearly illustrated in Slate Tripych, 1979, mimics the traces left on the earth’s surface by the effects of erosion and weather. As Joosten further explains, “In his painting, erosion manifests itself as a phenomenon not so much in the material as in the form: through the interplay of closeness and emptiness (or transparency).
The closed form (or material) is attacked from out of the white, while on the other hand form (the material) disturbs the silence of the (‘empty’) canvas.” 2
Paintings such as Untitled No. 5, 1967-72, Untitled No. 1 (Slate), 1974, and Untitled No. 7 (Red), 1974, reject the conventional square or rectangular canvas through the artist’s removal and replacement of segments of their surface area. In these works, Heizer demonstrates his concern with framing elements according to geometrically-calculated subtractions and reconfigurations, a process which he also employs in his earthworks.
The awareness of space and form articulated in Heizer’s paintings and earthworks is further pronounced in his sculptures, or “object sculptures” as he refers to them, in which scale, mass, gesture, and process are explored. The Minimalist shapes which he employs reference objects and architectures of ancient cultures; however, an extreme reduction of form underlines the artist’s interest in the spatial function form has within the “emptiness” of space. His preoccupation with the elementary forms of the square, rectangle, and circle, which reappear throughout his practice, come to full fruition in his sculptural works such as Vermont, 1977. Made using grey granite, this work is comprised of circles and their equivalent segments or fractions, arranged together in such a way that the harmonious relationship between the parts and the whole is emphasized.
Heizer currently lives and works in Nevada, where he is in the process of producing possibly the largest earthwork ever created in contemporary art. City, located in the remote desert, is comprised of five phases, each of which consists of a number of elaborate structures which the artist refers to as complexes. This monumental work has been an ongoing project for Heizer, and is currently the central focus of his artistic practice.