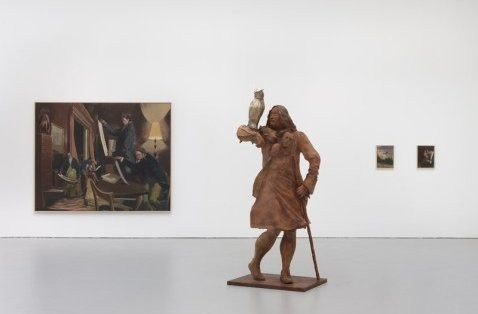 David Zwirner is pleased to present an exhibition of new works by Neo Rauch, on display at the gallery’s 533 West 19th Street space.
The exhibition, the artist’s fifth solo show at the gallery, consists of small and large format paintings—several larger-than-life—as well as a bronze sculpture, representing one of the first instances Rauch has worked in three-dimensional form.
Born in 1960 in Leipzig, then East Germany, Rauch is part of a generation of artists who came of age in a war-torn, divided country.
While his older East German peers, including Georg Baselitz, Anselm Kiefer, Sigmar Polke, and Gerhard Richter, emigrated to the West during the Cold War, Rauch spent his youth in the Eastern Bloc, and received his arts education at the Hochschule für Grafik und Buchkunst in Leipzig. The impermeable border within Germany famously tempered the advance of Western avant-garde movements in the East, where figurative painting maintained its predominance. Not until the end of the 1990s did a shift become apparent, and Rauch, then in his late twenties, came to spearhead a break with the existing dogma.
Rauch’s paintings are characterized by a unique combination of realism and surrealist abstraction. In many of his compositions, human figures engaged in manual labor or indeterminable tasks work against backdrops of mundane architecture, industrial settings, or bizarre and often barren landscapes. These figures, though squarely centered in his paintings, often have the appearance of being part of still lifes devoid of a human presence or collaged elements belonging to different time zones. Scale is frequently arbitrary and non-perspectival, which adds to an overall dream-like atmosphere; the spatial relationships construct their own imaginary realm.
In the large-scale painting Aprilnacht (April Night), a man and a woman each hold and inspect an owl or other big bird (in the case of the man, just its head). A fire is lit up between them and its smoke leads up to a cluster of branches suspended in the sky without visible support, as if spelling out a secret message. A pair of gloves in the bottom left corner likewise hovers without support. Holding a painter’s brush, they represent a covert indication of the artist’s presence or, more broadly, of the creative process as such.
Rauch’s bronze sculpture, Falknerin, depicts a life-size model of the female character with the bird on her outstretched arm. As if a personification of the mythological war goddess Athena, who is typically portrayed with an owl, the woman’s aggressive or perhaps supernatural qualities are indicated by several disembodied heads attached to her front. Although three-dimensional, a similar fantastical quality shrouds the sculpture as the woman in the painting. As Daniel Birnbaum, Director of the Moderna Museet, Stockholm, notes of the artist’s oeuvre in general: “Rauch has constructed a signature yet inscrutable cosmos; a weirdly concrete dream of production, athletic strength, and utopian modernity dreamed in a time and a place that no longer exists and yet prevails mysteriously.” 1
Rauch’s work is currently on view alongside work by his artist-wife Rosa Loy in a two-person exhibition at the Essl Museum in Klosterneuburg, Austria (through November 16, 2011). His work has been the subject of several solo exhibitions at prominent institutions internationally, most recently in 2011 at the Museum Frieder Burda, BadenBaden, Germany. In 2010, Rauch had his first major museum retrospective at the Museum der Bildenden Künste Leipzig and the Pinakothek der Moderne, Munich. A version of this retrospective was recently shown at the Zache ̨ta National Gallery of Art, Warsaw, in 2011. Other venues which have presented solo exhibitions include the Metropolitan Museum of Art, New York; Galerie Rudolfinum, Prague (both 2007); Musée d’art contemporain de Montréal; Kunstmuseum Wolfsburg, Germany (both 2006); Centro de Arte Contemporáneo Málaga, Spain (2005); Albertina, Vienna (2004); and the Bonnefantenmuseum, Maastricht, The Netherlands (2002).
Major museum collections which hold works by the artist include the Gemeentemuseum, The Hague; Hamburger Bahnhof - Museum für Gegenwart, Berlin; Kunstmuseum Wolfsburg, Germany; Los Angeles County Museum of Art; Metropolitan Museum of Art, New York; Museum der Bildenden Künste Leipzig; Museum Ludwig, Cologne; The Museum of Modern Art, New York; Pinakothek der Moderne, Munich; Solomon R. Guggenheim Museum, New York; Stedelijk Museum, Amsterdam; among others.