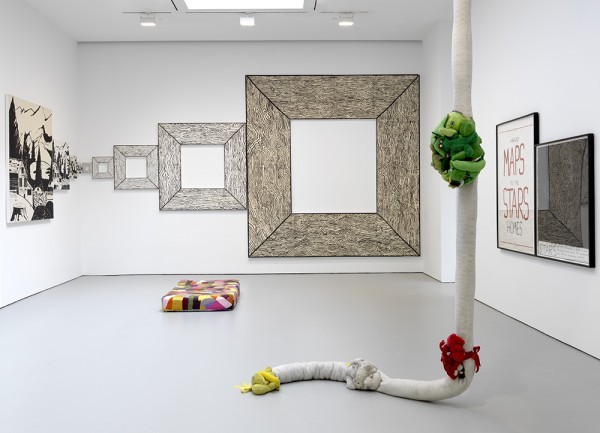 The contemporary art that was created and presented in New York and Cologne during the 1980s shaped a certain creative discourse between artists, curators, and gallerists on both sides of the Atlantic. This exhibition proposes an examination of this dialogue by focusing on the international artists who showed in both New York and Cologne between 1984 and 1989 and the key gallery and museum exhibitions of the period that took place in both cities.

For the better part of the 1980s until the fall of the Berlin Wall in 1989, Cologne was arguably the European center of the contemporary art world. While a number of established Cologne-based gallerists, including Karsten Greve, Paul Maenz, Rolf Ricke, Michael Werner, and Rudolf Zwirner, had already begun shaping the European reception of American art in the previous decade, the 1980s marked a period during which art being produced in and around Cologne gained international attention. A burgeoning gallery scene supported the emerging work of artists based in the region, with gallerists such as Gisela Capitain, Rafael Jablonka, Max Hetzler, and Monika Sprüth showing artists such as Dahn, Kippenberger, Oehlen, Trockel, and others. These German artists were exhibited along with the latest contemporary art from the US by artists like Gober, Koons, Prince, Sherman, and Wool. Conversely, the work of German artists was presented in New York, with breakout exhibitions at galleries such as Barbara Gladstone, Metro Pictures, Luhring Augustine, and other significant venues.

Important museum exhibitions that explored work being produced and exhibited on both sides of the Atlantic also set the tone for this ongoing dialogue, among them Europa/Amerika (Museum Ludwig, Cologne, 1986); A Distanced View: One Aspect of Recent Art from Belgium, France, Germany, and Holland (New Museum, New York, 1986); and The BiNational: American Art of the late 80s, German Art of the late 80s (Museum of Fine Arts/Institute of Contemporary Art, Boston and the Städtische Kunsthalle/Kunstsammlung Nordrhein-Westfalen, Düsseldorf, 1988).

The exhibition at David Zwirner will bring into focus what kind of influences, affinities, and dialogues may have been inspired at this distinct nexus, and the works on view are drawn from the Cologne and New York exhibitions in which the artists took part between 1984 and 1989. Highlights include a significant presentation of lead paintings and architectural photographs by Günther Förg, bodies of work that debuted at Galerie Max Hetzler in Cologne and Luhring Augustine & Hodes in New York in the 80s; a selection of work evocative of Robert Gober’s 1988 Cologne solo show at Hetzler; and key works by Jenny Holzer, including a wall of her Inflammatory Essays, 1979-82, which were shown in the noteworthy 1985 Eau de Cologne group exhibition at Monika Sprüth Galerie.

The show will present paintings by Martin Kippenberger from his 1984 Die I.N.P. (Ist Nicht Peinlich) Bilder [the “is not embarrassing” pictures] exhibition at Max Hetzler and the artist’s 1985 solo New York debut at Metro Pictures; selections from Jeff Koons’s “Banality” series, which was simultaneously presented in Cologne and New York at Max Hetzler and Sonnabend Gallery in 1988.

The exhibition will also include “knot” and “check” paintings that relate to Sherrie Levine‘s presentation in Bilderstreit: Wiederspruch, Einheit und Fragment in der Kunst seit 1960, the 1989 group exhibition of European and American art held at the Messehallen, Cologne (organized by the Museum Ludwig); significant large-scale paintings by Albert Oehlen; and a group of Cindy Sherman‘s grotesquely abject photographs from her “Disasters” series, first shown in New York at Metro Pictures in 1987 and in Cologne at Sprüth in 1988.

Additionally on view will be key works by Rosemarie Trockel, including a large-scale triptych from 1987 in which the text “Made in Western Germany” is repeated in an overall pattern across the machine-knitted surface of the work; and an important group of stenciled word paintings from Christopher Wool’s 1989 exhibition at Max Hetzler which spell out provocative roles such as “comedian,” “adversary,” and “pessimist.”

David Zwirner notes, “This exhibition is of personal significance to me, as I grew up in Cologne above my father’s gallery and was very much inspired by the creative and collaborative spirit of this particular generation of artists,gallerists, curators, and critics. This exhibition will examine a particularly vibrant period of dialogue and exchange that remains influential today.”

On the occasion of the exhibition, the gallery will publish an extensive catalogue that will include new scholarship by Diedrich Diederichsen and Bob Nickas, in addition to interviews with curators, artists, and gallerists and documentary photographs from the period.
www.davidzwirner.com