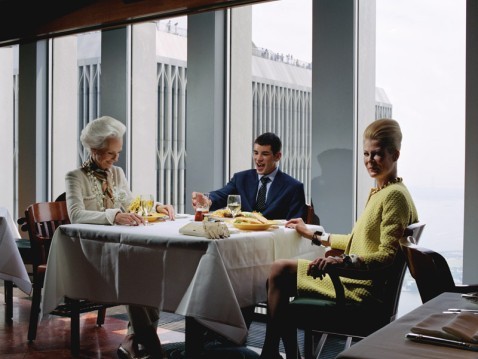 David Zwirner is pleased to present an exhibition of fashion photographs by Philip-Lorca diCorcia. On view at the gallery’s 519 West 19th Street space, the works were selected from a series of eleven editorial projects the artist created for W magazine between 1997 and 2008. This is the first time diCorcia will exclusively exhibit his fashion photography in New York, which not only occupies an inspirational and improvisational role within his thirty-year-long career as an art photographer, but which also helped redefine the genre as a whole. DiCorcia is particularly well-known for his carefully planned and meticulously executed photographs involving family members and a variety of “actors,” including anonymous strangers, pole dancers, and street hustlers. Over the past decades, he has been influential in reinventing the genre of street photography and the photographic notion of the “decisive moment” popularized by Henri Cartier-Bresson in the early 20th century. Deploying characters in preconceived yet seemingly random poses and contexts, diCorcia’s photographs are far from candid snapshots, but rather explore the idea of the “indecisive moment” and revolve around a tension between the casual and the posed, the accidental and the fated.
The tableaux-like, monumental quality, which envelops diCorcia’s broader oeuvre provides an intimate match with the contrived, theatrical nature of the fashion shoot. Together with W magazine’s long-time creative director Dennis Freedman (now the creative director of Barneys New York), diCorcia traveled to distinct locations around the world to produce his photographic essays. Employing his own models as well as people cast on the spot, his images weave together richly loaded narratives with a stylist’s selection of designer-brand clothes. These narratives sometimes appear far removed from the fashion industry’s traditional emphasis on formulaic beauty and harmony, and instead involve a delicate balance between glamour and grit, imagination and irony.
In Cairo, diCorcia has captured the psychological tension between a veiled girl standing next to a natural history diorama in an ornate silk dress and a young man seated behind her in casual, Western leisurewear (2008); in Paris, he is in Marc Jacobs’s bedroom, picturing the designer sitting guardedly at the edge of his bed beside a sleeping figure and original art work (2007); in Bangkok he stages a model holding a rooster inside a cockfighting ring (2001); three exotic dancers pose before a seated girl inside an ornate Havana building (2000); a bride decorates the ceiling in an empty conference-like room in São Paulo (2003); in New York, well-to-do ladies and a young man lunch at “Windows on the World” atop the World Trade Center (2000); and back in Paris, the actress Isabelle Huppert’s face stands out amongst several passers-by on a street (2004).
Each series appears ripe with ambiguous meanings and loaded connotations as characters appear and re-appear in a myriad of settings. Although the images take their departure from everyday life, there seems to be a symbolic dimension to the works, whereby they transcend their sharply lit, matter-of-fact presentation. An explicit plot is never readily apparent: the artist intends for the embedded stories insinuated by his images to be completed by the viewer.
It is commonly acknowledged that diCorcia’s photographs represent a shift in the evolution of fashion photography away from an exclusive emphasis on objects (or clothing) towards the portrayal of a given lifestyle. His works embody a critical detachment from traditional genre expectations and the eleven individual series typically refuse to idolize their subjects and alternately evoke cultural or gender-based stereotypes, alienation, and social inequalities. Treading between documentaiton and fiction, diCorcia establishes a different kind of calculated truth, which causes each of his images to appear at once subjective and universal.

About the book
The exhibition will coincide with a comprehensive publication featuring diCorcia’s eleven photographic narratives in their entirety. Edited by Dennis Freedman and published with Damiani Editore (Italy) under the new imprint, Freedman Damiani, the book also includes an interview between the artist and Jeff Rian and a text by Mary Gaitskill. Freedman was the founding creative director at W magazine until 2010, and during his eighteen years there, the magazine was awarded more than two dozen Society of Publication Designer Awards; three National Magazine Awards for Photography; and three Alfred Eisenstadt Awards for Photography, from the Columbia School of Journalism. In January 2011, Barneys New York announced that Freedman would be its new creative director. Rian is a writer and professor at the Ecole des Beaux-Arts, Nîmes, an editor of Purple magazine, a contributor to Artforum, author of Buckshot Lexicon (2000), and a contributing author to Richard Prince (Phaidon, 2003). Gaitskill is an author of essays, short stories, and novels, including Because They Wanted To (nominated for a PEN/Faulkner Award), Two Girls, Fat and Thin, and Veronica (nominated for the National Book Award). The recipient of a Guggenheim Fellowship, her work has appeared in The New Yorker, Harper’s, Esquire, The Best American Short Stories (1993 and 2006), and The O. Henry Prize Stories (1998).

About Philip-Lorca diCorcia
Born in Hartford, Connecticut in 1951, diCorcia studied at the School of the Museum of Fine Arts in Boston and received a Masters of Fine Arts from Yale University in 1979. Early in his career, he obtained grants from the National Endowment for the Arts and the John Simon Guggenheim Memorial Foundation, and his work was featured in a solo exhibition at The Museum of Modern Art in New York in 1993. Recent one-person shows include those held at the Los Angeles Museum of Art (2008) and the Institute of Contemporary Art, Boston (2007). In 2009, diCorcia’s critically acclaimed Thousand, an exhibition featuring an extraordinary installation of 1,000 of the artist’s Polaroid photographs, was on display at David Zwirner; and in 2010 it was on view at the Gwangju Biennale. His work is represented in major collections worldwide, including the Bibliothèque Nationale, Paris; Centre Georges Pompidou, Paris; Museum Folkwang, Essen; The Museum of Modern Art, New York; the Solomon R. Guggenheim Museum, New York; Tate Gallery, London; and the Victoria & Albert Museum, London.
DiCorcia lives and works in New York and currently teaches at Yale University.
www.davidzwirner.com