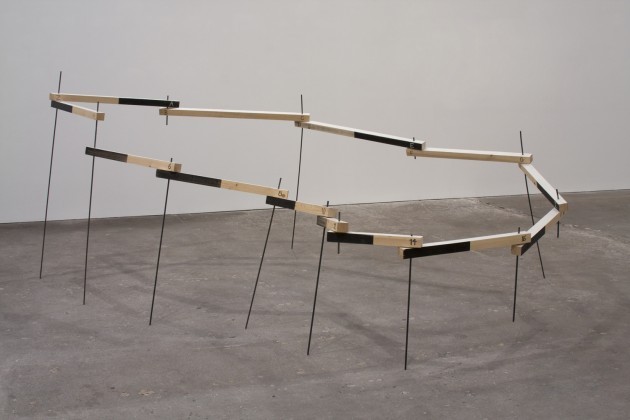 “Corroborations never compare with counterexamples, or even ‘exceptions’, as catalysts for the growth of concepts.”1
—Imre Lakatos

David Zwirner is pleased to present Proofs and Refutations at the gallery’s 519 West 19th Street space. The exhibition includes work by Francis Alÿs, Trisha Brown, André Cadere, VALIE EXPORT, Henry Flynt, Simone Forti, Dan Graham, Georg Herold, Alfred Jensen, Lee Lozano, Man Ray, Bruce Nauman, Max Neuhaus, Adrian Piper, Sigmar Polke, R.H. Quaytman, Dorothea Rockburne, and Al Taylor.
This exhibition explores relationships between art and mathematics from the point of view of conjecture and criticism. Among the artworks on view, systems—some mathematical, some not—appear as a source of contradiction or point of argumentation, rather than as a paradigm of intellectual rigor or certainty. In some cases the work reflects the inherent limitations of mathematics. In others cases it makes space for an idiosyncratic or personal engagement with the subject and its forms.
The philosopher of mathematics Imre Lakatos argued that “mathematics does not grow through a monotonous increase of the number of indubitably established theorems but through the incessant improvement of guesses by speculation and criticism, by the logic of proofs and refutations.”2
Some of the works on view demonstrate artistic processes that resemble the active, searching, and provisional nature of mathematical activity itself. Others exhibit a healthy skepticism towards logic or incorporate mathematical notions and procedures into poetic proposals.

1.
Playing with axiomatic systems and what mathematician Hermann Weyl termed the “range of indeterminacy”3 made available by logical deduction is a strategy shared by several artists in the exhibition. The large scale composition in paper, chipboard, and graphite Set (1970) by Dorothea Rockburne was inspired by her own study of the foundations of mathematics. As Robert Pincus-Witten has written of related work by the artist, “This is an art of demonstration rather than illustration. [...] The process of thought itself is the subject of this art.”4
Al Taylor shows how artists sometimes work like mathematicians in setting out rules while continuously expanding the domain of their definitions. The three-dimensional construction Odd Vows (Bern) (1992) is created from an idiosyncratic ordering of numerals and vowels via painted plywood and metal stakes. In keeping with the artist’s practice, the work functions as a model for making drawings. In the sculpture Dead End Tunnel Folded Into Four Arms with Common Walls (1980), Bruce Nauman devises a system of continuous transformation from elementary geometric forms, and yet its rudimentary quality suggests the unfolding of a proposition or theory through a spatial model. Marco De Michelis has described this aspect of Nauman’s work in terms of a “mental architecture” that the viewer reconstructs in spite of the “deliberate overlaps of contradictory information, which multiply their meanings and preclude any uniform perception, whether emotional, psychological, or physiological.” 5
Trisha Brown’s dance constructions are composed from simple movements in combination. The video Line Up (1976) consists of several loosely choreographed works, starting with an “equipment piece” in which the dancers lie on their backs, holding long sticks from end to end. The fragile arrangement offers an unusual physical apprehension of line and measurement that embraces its flaws.

2.
“Mathematics, this product of human activity, ‘alienates itself’ from the human activity which has been producing it. It becomes a living, growing organism, that acquires a certain autonomy from the activity which has produced it; it develops its own autonomous laws of growth, its own dialectic.” 6
The “certain autonomy” of mathematics results in unexpected forms and structures. The photograph Mathematical Object (1936) by Man Ray depicts a plaster model of a mathematical surface. The artist photographed several mathematical models, dating from the period 1870-1930, at the Poincaré Institute in Paris, demonstrating their surreal qualities. Later, Man Ray created a series of paintings based on these models, naming them the Shakespearian Equations; a photograph of another model was the inspiration for the painting in the exhibition Much Ado About Nothing (1949). R. H. Quaytman also worked from a mathematical model for her painting Conical Wedge (2011), created for the exhibition. The upper edges of the planes in the fan-like arrangement depicted in this work approximate the eponymous mathematical surface, while also recalling the spine of a book. Adrian Piper appeals to the numerical imagination in her Nineteen Concrete Space-Time Infinity Pieces (1968-69), a sequence of conceptual proposals gathered in a standard ring binder. As she explains in the introductory page, “My present work is involved with the general nature of time and/or space,” or infinity.

3.
Other artists remind us that despite its abstraction, mathematics is a human activity and it cannot be entirely insulated from political and psychological forces.VALIE EXPORT became known in the 1960s and 70s for her provocative performance, film, and photography-based works that challenged dominant “male” values. The exhibition includes a selection of vintage prints from the artist’s “Body Configurations” (1972-82), a series of works documenting EXPORT physically conforming her body to the rational structure of the surrounding architecture. This bodily inscription is sometimes accentuated by hand-drawn geometric lines. Georg Herold’s photograph Cube I (1987/2003) echoes the trappings of the classroom or lecture hall. A self-portrait, the artist stands in suit and tie beside a podium on which a cubical wooden frame is carefully propped. The object, apparently on demonstration, produces an optical illusion that remains unsettling, despite Herold’s steady gaze toward the viewer. Another artist who explores the latent strangeness of mathematics is Lee Lozano, whose visual equations viscerally evoke the psychological, almost physical qualities of mathematical symbols. Her graphite drawings, which include No title [LONG DIVISION] (c. 1962), depict mathematical operations with a disturbing humor. In her notebooks, the artist wrote “There is perhaps more striving for beauty in science than in art.” 7
André Cadere’s Barre de Bois Rond (Round Wooden Stick) (1975) rests in the corner of the gallery. Its differently colored segments alternate in an almost regular pattern. What distinguishes each of Cadere’s works of the same series is not the pattern—he produced many similar works with the identical sequence of permutations—but the exception to the pattern. Cadere was known to place these works uninvited in an exhibition space, thereby drawing attention to the art world’s politics of conformity and exclusion. Sigmar Polke’s Lösungen V (1967), which irreverently depicts a sequence of false numerical equations, disrupts the expectation that viewers might have of finding logical mathematical content in the works on view.

4.
The intrinsic limitations of mathematical logic are points of departure for two artists in the exhibition. Henry Flynt coined the term “concept art” in 1961 to describe artworks that also functioned as critiques of logic or mathematics. In his ongoing practice, Flynt has since broadened the term to include word pieces that illustrate philosophical paradoxes. Counting (2011), conceived for “Proofs and Refutations,” consists of a placard requesting the entering visitor to count the works in the exhibition; the visitor who has done so may obtain a copy of a written explanation page from the gallery’s front desk. Schema (March 1966) (1966-67) by Dan Graham is a work that “takes its own measure.”
Graham offered instructions for composing a poem, each line of which is contingent on its entirety. For the artist, this self-referential structure recalled Kurt Gödel’s incompleteness theorem, one of the most surprising mathematical results of the 20th century, which, in its most basic terms, establishes the intrinsic limitations of the discipline of mathematics itself.

5.
The exhibition also includes work by artists who employ arithmetic or geometry with such a degree of personal awareness that mathematics operates more as poetics than science. Francis Alÿs explores a physical bodily measurement of the city by mapping his movements North, South, East, West in the course of numerous walks through New York City in 2001. These wanderings are either diagrammed or notated in the small notebook that comprises Pacing (2001). Simone Forti’s three Illuminations Drawings (1972) were made during the choreographer’s experiments in tracing numerals with the body. In undertaking structured movements like these, she proposed the possibility that one could “unconsciously sense a familiar kind of order, [as] form seemed to be the storage place for presence.”8
Max Neuhaus often employed elementary structures to compose his site-specific sound installations. Round (1993) is a drawing of a sound work that was originally presented in a rotunda in New York. Like Forti’s choreography, this work suggests the possibility of a sensory experience of ideal mathematical forms, in this case rotating vertical planes. The exhibition will also include two works on paper by Alfred Jensen: Beginning with Proportion 9 the count of the great year of 144 years of 260 days (c. 1965) and Number six is the first that partakes of every number. Pythagoras (1963), both of which contain painterly grids and computations which are “the end product of theoretical reflections and analyses in which such diverse systems of Mayan calendars, pyramid architecture, Indian and Chinese number systems and color and harmonic theories play their part.” 9
The exhibition is curated by Philip Ording (Department of Mathematics, Medgar Evers College, City University of New York) and Alexandra Whitney.