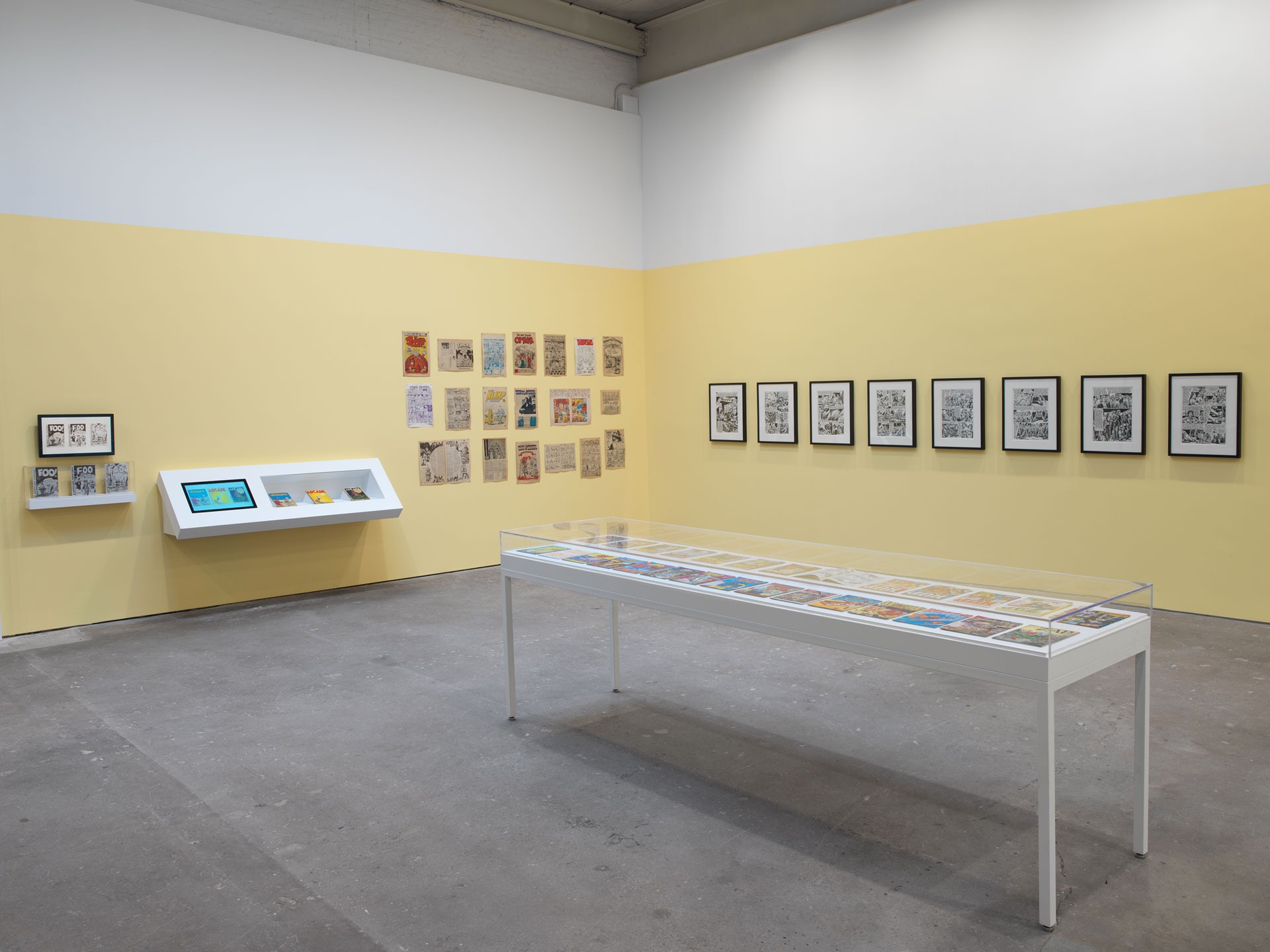 David Zwirner is pleased to present an exhibition organized by Robert Storr that examines the mind and career of R. Crumb. The exhibition will feature a wide array of printed matter culled from the artist’s archive: tear sheets of drawings and comics, taken directly from the publications where the works first appeared, as well as related ephemera. These often fragile works on paper will be installed across the walls of the gallery’s 519 West 19th Street space in New York. Further illuminating Crumb’s practice, the show will also feature a selection of rare sketchbooks and original drawings by the artist.

Instrumental in the formation of the underground comics scene in the 1960s and 1970s, Crumb has helped challenge and expand the boundaries of the graphic arts and redefined comics and cartoons as countercultural art forms. Widely circulated, often celebrated, Crumb’s published imagery, such as his comic strips Fritz the Cat, Mr. Natural, and Keep on Truckin’, offers a mordant satirical critique of modern society, directly addressing political disillusionment, the never-ending battles between "squares" and bohemians, racial and gender stereotypes, sexual fantasies and fetishes, and the absurdities of social convention and conformity—themes the artist also often explores through disturbing but hilariously abject self-caricature that dramatizes incidents in his own life and surroundings.

The tear sheets presented in the exhibition span the entirety of Crumb’s career and encompass numerous pages from his comics, several of his magazine and album covers, sixties- and seventies-era broadsides, and tabloids from San Francisco’s Haight-Ashbury, Oakland, Manhattan’s Lower East Side, and other counterculture enclaves as well as exhibition ephemera and other printed matter. Complementing this selection of printed matter are several rare sketchbooks by Crumb from as far back as the 1950s, which reveal the artist’s development and his early exemplary skill as a draftsman. Digital touch screens will reproduce the sketchbooks in their entirety, featured alongside the original works, to allow visitors to scroll through these documents and witness Crumb’s working process.

A selection of drawings from Crumb’s Art & Beauty Magazines will also be shown. This series, a complete volume of which was published by David Zwirner Books in 2016, emulates the format of a publication of the same title from the 1920s. The original presented itself as a specialist publication for "art lovers" and "art students," but was one of many such magazines that used this format as a pretext for printing nude or scantily clad pictures of women, and sometimes men, as a way of getting around the strict antipornography laws of the time. In his series, Crumb created a cast of female gures from tabloid celebrities, sports stars, life models, friends, and strangers, and accompanied them with journalistic-style commentary and quotations from other artists like Leonardo da Vinci, Paul Cézanne, and Andy Warhol. The poetic, even philosophical prose mirrors the romanticized language of the former magazine, but becomes tinged with subtle sarcasm and self-mockery that destabilizes the relationship between image and caption.

Also on view will be a group of historical works on paper by English and American satirists and illustrators including William Hogarth, James Gillray, Thomas Nast, and Art Young, offering a unique opportunity to understand Crumb within the great traditions of social critique that extend back to the eighteenth century. In addition, director Terry Zwigoff’s acclaimed 1994 documentary, Crumb, a film that explores the artist’s life, career, and family, will be screened continuously throughout the run of the show.

Born in Philadelphia in 1943, R. Crumb moved to the dynamic Haight-Ashbury neighborhood of San Francisco in 1967, and relocated in 1991 to the south of France, where he currently lives and works. Crumb joined David Zwirner in 2006, where he has had three solo exhibitions. In 2016, Art & Beauty marked Crumb’s first solo presentation at David Zwirner London. In 2017, David Zwirner New York featured an exhibition of the collaborative work of Aline Kominsky-Crumb and R. Crumb.

The artist’s 2010 gallery show, The Bible Illuminated: R. Crumb’s Book of Genesis, presented 207 individual black-and- white drawings from his now landmark The Book of Genesis Illustrated by R. Crumb. Published by W.W. Norton in October 2009, the book chronicles all fifty chapters of Genesis in a tapestry of detail and storytelling, rendered frame by frame in meticulous comic-book fashion. The momentous project received instant critical acclaim, topping many bestseller lists, including #1 on The New York Times's Graphic Books list. Over 200,000 copies have been printed worldwide, and translation rights have been sold to fifteen countries, with published translations currently in circulation in French, German, and Italian. The exhibition was previously on view at the Hammer Museum, Los Angeles, in 2009, before traveling to the Portland Art Museum, Oregon; Columbus Museum of Art, Ohio; Bowdoin College Museum of Art, Brunswick, Maine; and the San Jose Museum of Art, California. In 2013, it was presented as part of the 55th Venice Biennale, curated by Massimiliano Gioni.

In 2016, the Cartoonmuseum Basel hosted Aline Kominsky-Crumb& Robert Crumb: Drawn Together, the first comprehensive museum presentation of the artists’ joint work. A retrospective of Crumb’s work was held in 2012 at the Musée d’Art Moderne de la Ville de Paris. In 2011, his work was the subject of a solo exhibition at the Museum of American Illustration at the Society of Illustrators, New York. A major solo show devoted to Crumb’s work was organized by the Yerba Buena Center for the Arts, San Francisco, in 2007, and traveled from 2008 to 2009 to the Frye Art Museum, Seattle; Institute of Contemporary Art, Philadelphia; Massachusetts College of Art and Design, Boston; and the Grand Central Art Center, Santa Ana, California. Other one-person exhibitions have been organized by the Whitechapel Gallery, London, a show which to traveled the Museum Boijmans Van Beuningen, Rotterdam (both 2005), and the Museum Ludwig, Cologne (2004). Terry Zwigoff’s documentary Crumb was named the best film of 1994 by the late critic Gene Siskel and won the Grand Jury Prize at the Sundance Film Festival in 1995.