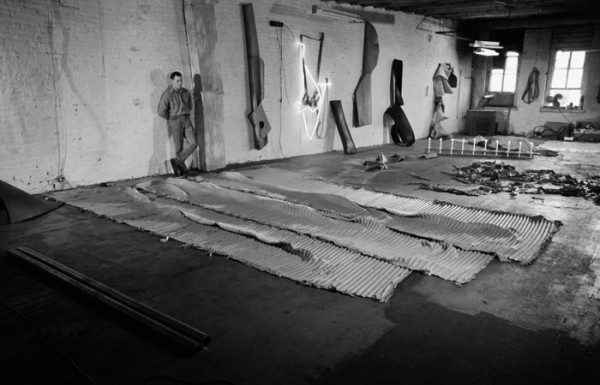 David Zwirner is pleased to present an exhibition of early work by the artist Richard Serra. Dating from 1966 to 1971, the works on view, drawn from museum and private collections, represent the beginning of the artist’s innovative, process-oriented experiments with nontraditional materials, such as vulcanized rubber, neon, and lead, in addition to key early examples of his work in steel. Also featured will be a program of the artist’s films from this period.
The interplay of gravity and material that was introduced early in his career set the stage for Serra’s ongoing engagement with the spatial and temporal properties of sculpture. This exhibition aims to reconsider the groundbreaking practices and ideas that so firmly situate Serra in the history of 20th Century art.
On the occasion of the exhibition, the gallery will publish a comprehensive monograph devoted to this early period of the artist’s practice with Steidl, Göttingen; the publication will include new scholarship by Hal Foster, in addition to a selection of archival texts and photographs from the years 1966 to 1972.
Richard Serra’s (born 1938) first solo exhibitions were held at the Galleria La Salita, Rome, 1966, and, in the United States, at the Leo Castelli Warehouse, New York, in 1969. His first solo museum exhibition was held at The Pasadena Art Museum in 1970. Serra has since participated in Documenta 5 (1972), 6 (1977), 7 (1982), and 8 (1987), in Kassel; the Venice Biennales of 1984 and 2001; and the Whitney Museum of American Art’s Annual and Biennial exhibitions of 1968, 1970, 1973, 1977, 1979, 1981, and 1995. He has had solo exhibitions at the Stedelijk Museum, Amsterdam, 1977; the Kunsthalle Tübingen, 1978; the Museum Boijmans Van Beuningen, Rotterdam, 1980; the Musée National d’Art Moderne, Paris, 1984; the Museum Haus Lange, Krefeld, 1985; The Museum of Modern Art, New York, 1986; the Louisiana Museum, Humlebæk, 1986; the Westfälisches Landesmuseum für Kunst und Kulturgeschichte, Münster, 1987; the Städtische Galerie im Lenbachhaus, Munich, 1987; the Stedelijk Van Abbemuseum, Eindhoven, 1988; the Bonnefantenmuseum, Maastricht, 1990; the Kunsthaus Zürich, 1990; the Museo Nacional Centro de Arte Reina Sofía, Madrid, 1992; Dia Center for the Arts, New York, 1997; Centro de Arte Hélio Oiticica, Rio de Janeiro, 1997-98; Trajan’s Market, Rome, 2000; The Pulitzer Foundation for the Arts, St. Louis, 2003; and the Museo Archeologico Nazionale di Napoli, Naples, 2004. In 2005 eight large-scale works by Serra were installed permanently at the Guggenheim Museum Bilbao, and in 2007 the Museum of Modern Art, New York presented a retrospective of the artist’s work. His work was the subject of a solo exhibition at the Galeries Nationales du Grand Palais, Paris in 2008 (MONUMENTA 2008: Richard Serra: Promenade); in 2011-12 the exhibition Brancusi-Serra traveled from the Beyeler Foundation, Riehen to the Guggenheim Museum Bilbao; and a traveling survey of Serra’s drawings was on view in 2011-12 at the Metropolitan Museum of Art, New York; the San Francisco Museum of Modern Art; and the Menil Collection, Houston.
www.davidzwirner.com