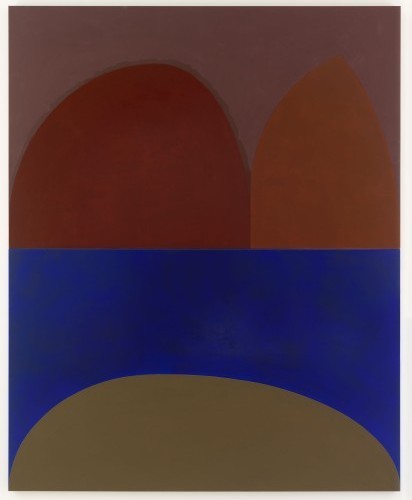 David Zwirner is pleased to present an exhibition of new paintings by American artist Suzan Frecon. On view at the gallery’s 525 West 19th Street space, this is the first solo exhibition by the artist since she joined the gallery in 2008.
For the past four decades, Frecon has become known for abstract oil paintings and watercolors that are at once reductive and expressive. Composed with subtle, interacting arrangements of color, which the artist applies with meticulous attention to the physical qualities of paint, they appear to blur the distinction between matter and transcendence. Color assumes a physical property and almost appears material; as the artist has stated, “The reality and the spiritual of my paintings are the same.”
The exhibition brings together recent paintings that revolve around the activity of painting itself. Each work is the result of a thoughtful, laborious process in which the artist first sketches and revises a composition, usually evolved from previous works. She then executes a “plan” rooted in geometric and volumetric calculations and precisely defined spatial relationships. She proceeds gradually, guided by intuition; the result is a complex amalgamation of preparation and instinct, order and chance. Pictorial associations are never intentional, and Frecon refuses to imbue her paintings with symbolic undertones.
Inspired by an array of sources throughout history — from Celtic, Byzantine, and Pre-Renaissance art and architecture, to the works of artists as varied as Paul Cézanne, Piet Mondrian, Hilma af Klint, and Mary Benson — the arresting purity of Frecon’s oeuvre is as unique as it is bold. Her personalized color palette is derived from pigments ground in oil, and she varies the quantities in order to obtain shifting degrees of matte and sheen, surface and depth. Her almost tactile use of color heightens the visual experience of her work, and depending on the light source and viewing angle, different perceptions emerge. Her forms, notably, will change from positive to negative, and colors and surfaces vary in terms of density and reflectivity. Figure becomes ground, and vice versa; or, in Frecon’s words, “full space and empty space” become interchangeable. As in a natural symbiosis, the constantly changing appearance of the pictorial surface lends her works an air of infinity and timelessness; they are never static. This visual suspension could be comparable to the durational quality of music: the paintings reveal themselves slowly, little by little, like a musical score.
composition in four colors 2, 2010, a two-paneled, large-scale painting, combines differing degrees of reflectivity and transparency. The upper panel presents a rich, dark red juxtaposed with a curved, terre verte area, while an orange-red haematite at the bottom envelops a deep blue, rounded form. As with most of the artist’s works, it is one of several variations on a fixed composition. Once satisfied with a particular structure, Frecon will alternate colors and surface textures, often achieving great contrasts of immediacy and radiance.
In the embodiment of red series (including version 13, 2010, soforouge, 2009, and pompeiian persian, 2010), Frecon juxtaposes four combinations of red, a color she finds to be one of the most compelling and challenging. Although she stresses that her primary reason for using it in her works is visual, the primordial quality of earth reds, and the fact that they are innate to most cultures and eras of art, affirms her use of them.
cathedral series, variation 6 and 7, both 2010, employ different blues, such as ultramarine and indigo, interacting with adjacent, more matte, terre vertes and violet-hued caput mortuums. In accordance with Frecon’s practice, these works are testaments to her interest in the history not simply of painting, but of paint itself.
Frecon’s practice inspires philosophical contemplation. The artist herself says little about her work, so as not to interfere with the viewing experience: titles are intended as designations, or further abstractions — which is why they are kept in lower-case. She has spoken of “being behind the scenes,” disappearing behind the work, or at least remaining anonymous, so that the paintings can speak for themselves: as she notes, “there is no orator.”
The exhibition will be accompanied by a fully-illustrated catalogue published by Radius Books/David Zwirner, with an essay by Joachim Pissarro.
Suzan Frecon was born in Mexico, Pennsylvania, in 1941. Following a degree in Fine Arts at Pennsylvania State University in 1963, she spent three years at the École Nationale Supérieure des Beaux-Arts in Paris, France. In 2008, Frecon’s work was the subject of a major solo exhibition at The Menil Collection in Houston, Texas, form, color, illumination: Suzan Frecon painting, which traveled to the Kunstmuseum Bern, Switzerland. She was included in the 2010 Whitney Biennial, and her works are represented in the permanent collections of prominent institutions, including the Fogg Art Museum, Harvard University, Cambridge, Massachusetts; Kunstmuseum Bern, Switzerland; The Menil Collection, Houston; The Museum of Modern Art, New York; the National Gallery of Art, Washington, D.C.; and the Whitney Museum of American Art, New York. She lives and works in New York.
www.davidzwirner.com