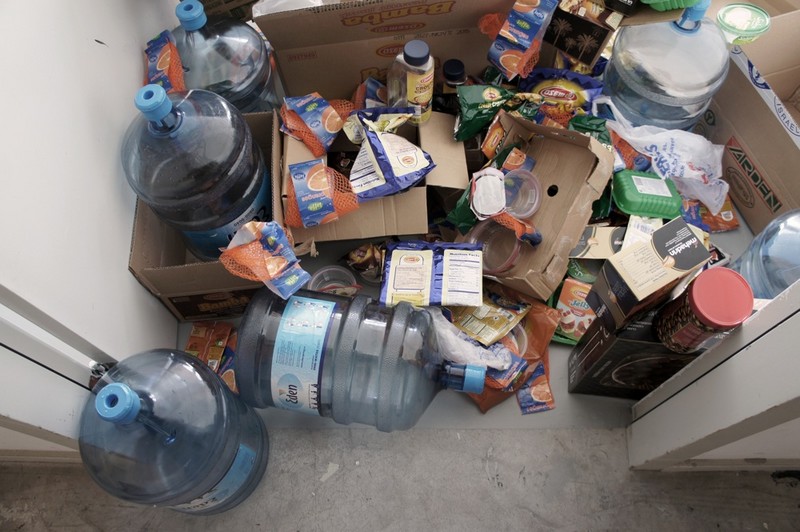 From October 10th until November 1st Adrian Melis will be showing his work No Admittance in the LocusSolus of the Apple arts centre. The Space will be sectioned off by the artist with a variety of seemingly wasted products, forcing the viewer to peep in from outside. However, the items have a more important meaning than one would think of at first glance.

Empty date boxes, water containers and peanut cans are some of the packaging left by Adrian Mellis at the entrance of the exhibition space. At first sight, these products might appear as leftovers from a party or a random dinner. Together, they form a clear division line that leaves the visitor with no option but to peep from outside an occupied space. Movement is limited to a fix position.
Having a closer look, we notice these products haven’t been aleatory selected; they stand for Israeli brands consumed in the Netherlands.

In April 2015, de Balie in Amsterdam hosted What’s Art Got to Do with It?*, a closed-door meeting part of a three day cultural conference where Palestinian, Israeli and Dutch artists, filmmakers, writers and musicians came together to discuss their roles in the frame of this political conflict. As a response to it, in No Admittance Mellis attempts to question until what point a work may be ethically involved, reflecting on an issue that still brings encountered positions.

* What’s Art Got to Do with It? was organized by De Balie, Dancing on the Edge, and Een Ander Joods Geluid