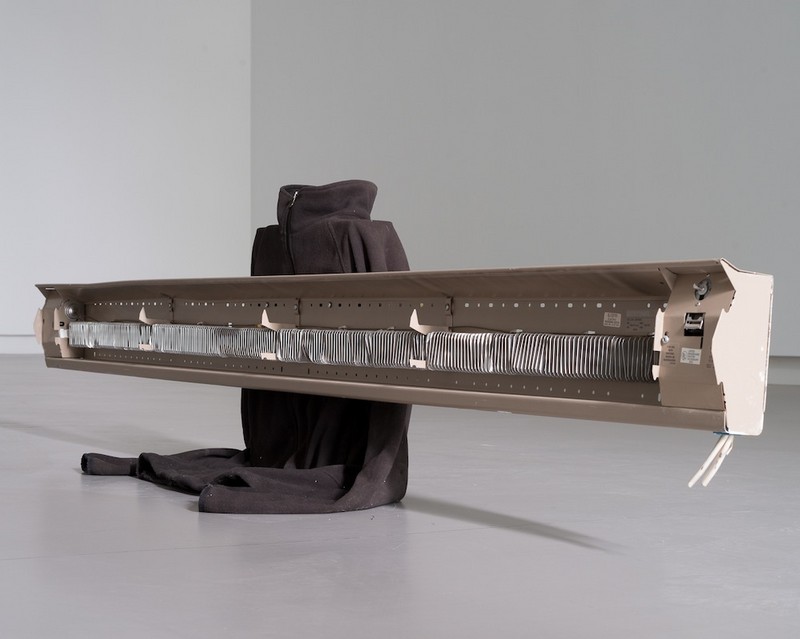 It's unsettling – but what is it?” is the simple question often provoked by the work of Michael E. Smith. Smith makes objects and videos that seem to be reconstructions of distorted emotions. His insinuative shapes define the atmosphere in the space, and often evoke dark and morbid associations. He creates empty urban locations of sorts, with a few surprising remnants of human presence. Smith's work is redolent of mortality and transience, but at the same time always has an undertone of (dark) humour.

Smith makes sculptures from everyday objects and industrial materials. He puts together objects like plastic shapes, cables, toilets, bathtubs and clothing to create new constructions. Debris scrupulously collected from the world of urban consumer culture, radically transformed, and separated from its origin form and function, trapped in a different dimension that shows it alternative potential, as well as how natural processes can change and mutate man-made structures.

Smith fills his sculptures with PVC foam, hardens them with resin, or covers them with canvas. The surfaces are sometimes polished, but can also be left raw, like scrapes on the skin. The sculptures are created with considerable feeling for the materials that the artist uses. While it is precisely the commonplace nature of his materials that make his works recognizable to a certain extent, but because of the manner in which Smith treats them, combines them and places them in space, the sculptures surprise the viewer.

A remarkable tension arises between the object and its surroundings, through which the artist gives new life to dead objects and materials. With his unpretentious but very precisely constructed artworks Smith creates a menacing and sometimes morbid, but also reverent and mournful atmosphere in the exhibition spaces. At the same time, he constantly forces viewers to ask themselves what, precisely, they are looking at and, with that, what it is that makes these objects art.

The exhibition will be accompanied by a publication, issued in collaboration with the Hannover Kunstverein, where Smith's work will also be seen in a solo exhibition from 21 November, 2015, through 17 January, 2016,.

About the artist:
Michael E. Smith was born in Detroit (USA) in 1977, and presently lives in Hokpinton, New Hampshire. From 2004 to 2006 he studied in Detroit at the College for Creative Studies (CCS). In 2008 he rounded off his studies at the Sculpture Department at Yale University, as a student of Jessica Stockholder. Since 2008 he has taught at the CCS. His work has recently been seen in the Mönchehaus Museum Goslar (2011), Culturgest Lisbon (2012), Whitney Biennial, New York, Les Ateliers de Rennes - Biennale D'Art Contemporain (2012), CAPC musée d’art contemporain, Bordeaux (2013), and Ludwig Forum, Aachen (2013).
www.deappel.nl