Guess Who’s Coming to Dinner Too? 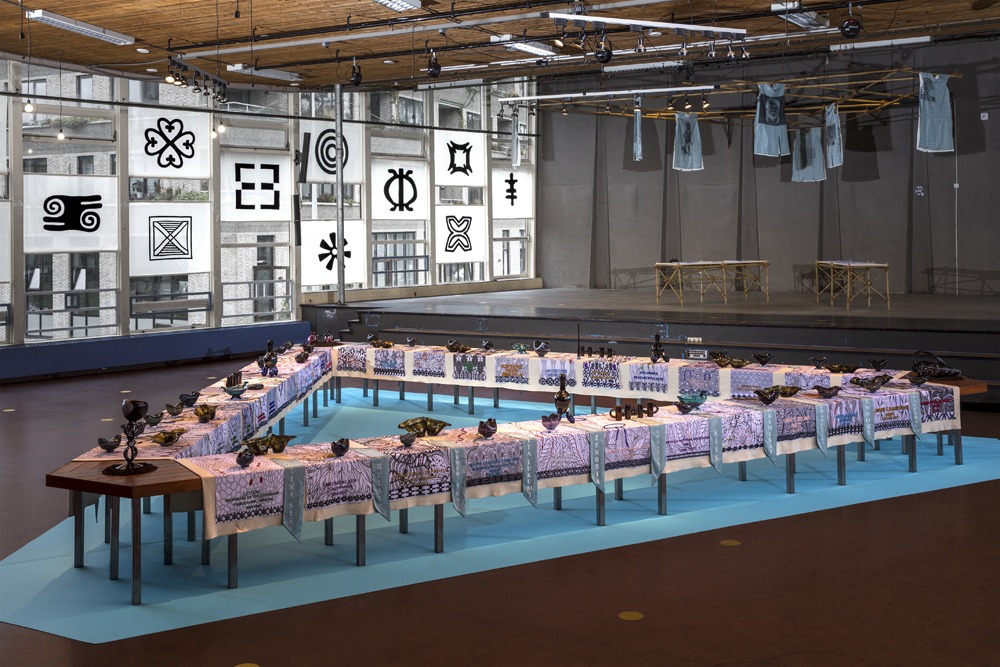 Guess Who’s Coming to Dinner Too? is a solo exhibition as a social monument—created by artist, activist and womanist, Patricia Kaersenhout alongside a growing community of collaborators and guest curated by Vivian Ziherl, an alumni of De Appel’s Curatorial Programme 2010/2011. Rosa te Velde designs the exhibition while Lydienne Albertoe designs the publication. This ‘collective body’ honours the lives and struggles of black women and women of colour throughout history and mythology, naming and narrating thirty-eight ‘heroines of resistance’.

When it was first conceived by Kaersenhout in 2017, Guess Who’s Coming to Dinner Too? set out to challenge the horizon of (art) history with a powerful celebration of mythological, historic and contemporary women of colour. The centrepiece of the project—an elaborately set triangular table installation—departs from Judy Chicago’s now canonical artwork The Dinner Party (1974-1979), which celebrated thirty-nine women from antiquity to the present, with a majority of the seats devoted to American and European heroines.

Kaersenhout takes a distinctive approach. Her generous vision of history, hospitality and womanhood crystallizes with an extensive new body of glassworks produced with Vrij Glas in Zaandam and inspired by the shared dining vessels used in Moche and Chavin rituals of ‘dining with the dead’. These sit atop textiles embroidered and beaded with women and men from the neighbourhoods where the project has been activated.

De Appel presents the fullest realisation of Kaersenhout’s work-in-progress to date – inside the iconic aula of the Broedplaats Lely (the institution’s home since 2016), designed 1969 by Ben Ingwersen as a showpiece of the utopian Garden City of Amsterdam Nieuw-West. Original features – such as the rhythmic geometry of the window frame – are brought forward and adorned with Adinkra symbols (historically used to invoke aphorisms and empowering concepts among Akan groups from what is now Ghana). Kaersenhout has ascribed one symbol to each of the women she honours. Renewed and newly inspired by her collective monument, this space becomes a place to pose vital questions about history, hospitality and dignity.

PUBLICATION
Accompanying the exhibition is a publication produced in limited edition, designed by Lydienne Albertoe, edited by Hannah Cheney and Vivian Ziherl, with texts by Kaersenhout and Ziherl, as well biographies compiled and translated by Mirjam Linschooten and Martha Jager. English and Dutch.

CAMPAIGN
De Appel’s crowdfunding campaign to renew the Aula of Broedplaats Lely is finished and we have reached our goal! Our eternal gratitude to all backers, including the generous people who wish to remain anonymous: