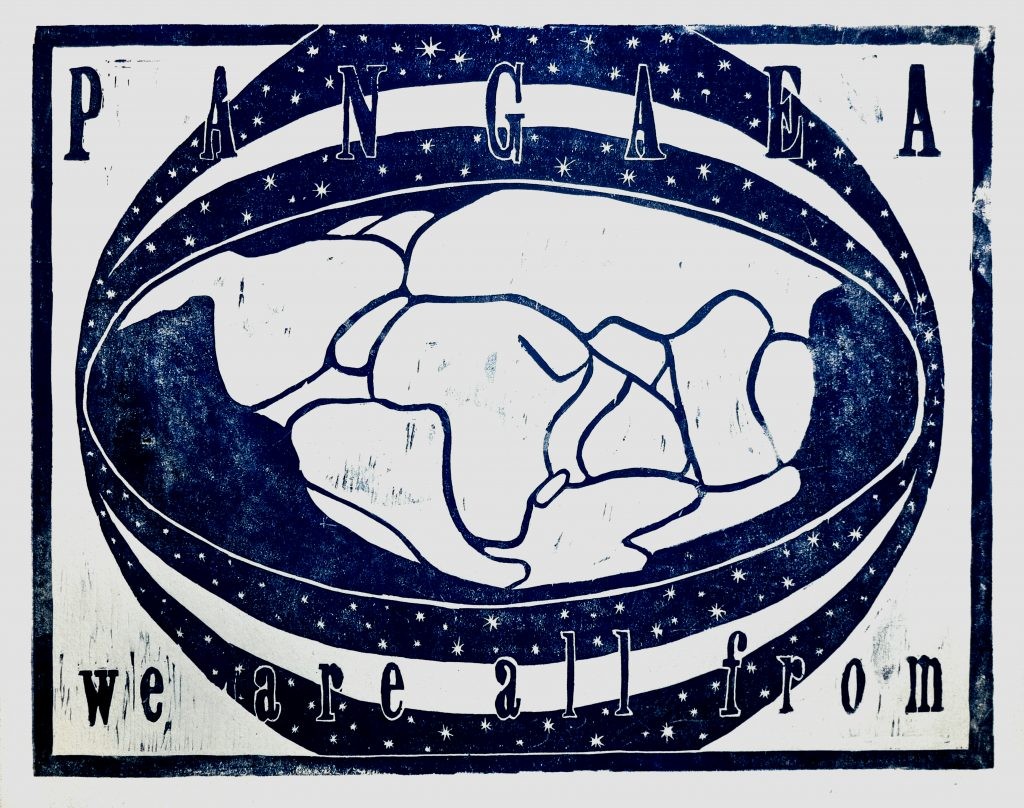 With his emblematic woodcut print, We Are All from Pangaea, 2011, Hungarian artist Tamás Kaszás takes us 200 million years back in time. A time with only one continent, surrounded by a single ocean, with plentiful life on earth. For Kaszás, the imagined return to this supercontinent (called Pangaea, as it was coined by the German geophysicist Alfred Wegener) marks the potential of a restart; a hypothetical ground zero.

This traveling back in time to imagine an alternative future is central to Tamás Kaszás’ elaborate artistic practice. Asking us to think through future scenarios in the wake of a political, economic, or technological collapse, the artist, quite provocatively, states that we shouldn’t be waiting for these breakdowns to take place as they are already happening around us on a daily basis. Tackling this urgent issue, Kaszás finds inspiration in the peripheral yet rich artistic legacy of the historical avant-garde of Eastern Europe. More precisely, the artist dissects the innovative ways in which the avant-garde applied strategies of advertisement and display to blur the lines between autonomy and functionality.

SCI FI AGIT PROP is an exhibition set in an imagined future, in which Tamás Kaszás imagines DIY-techniques for imminent survival. Sculptures that could be recognized as functional objects, together with installations of graphic materials containing posters and flyers, speculate on questions of collective and solidarity-driven survival techniques for the future. The exhibition imagines these new ways of living within a post-digital, post-market, post-industrial urban context, through what the artist calls “the science fiction of agitative propaganda.”

SCI FI AGIT PROP simultaneously takes place at De Appel in Amsterdam (Netherlands) and Netwerk Aalst (Belgium). The exhibition connects to the diverse urban contexts of both institutions: the rapid gentrification of Amsterdam’s Nieuw-West area, and the changing post-industrial context of Netwerk Aalst. For each location, the artist develops specific public sculptures that come back in the exhibition spaces. How does Tamás Kaszás’ alternative reality affect the way we perceive and interpret the public space in which it is set?
www.deappel.nl