The Gravity in Art 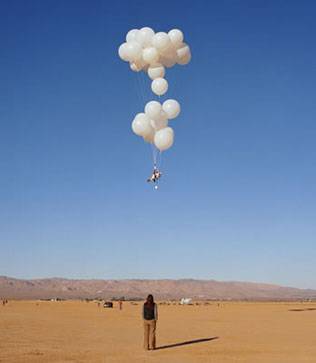 The exhibition THE GRAVITY IN ART at De Appel presents a brief impression of the history of gravity in the visual arts. Research has produced an abundance of works by artists who have not avoided coming to terms with the phenomenon of gravity. ‘The theme of gravity is a thread that runs through all of art history,’ says Theo Tegelaers. ‘It seems to be something that artists have to make sure they face up to early on in their careers – to conquer their fear of gravity and learn to master it.’ For this exhibition, the photograph by Yves Klein entitled Leap into the Void (1960), in which Klein is shown diving from an apartment window, serves as the starting point.

The selected works of art in the exhibition are often records of attempts to escape the force of gravity to which the human being is subject. In these works the artists defy the law of gravity, sometimes risking life and limb by simply exposing the body to this natural law. The list of works that fit into this category vary from the documented performances of Bruce Nauman, Vito Acconci and Chris Burden to the studies in flying by Joel Tauber and the daredevilry of Fiona Tan and Erik Wesselo.
Other works have to do with a sublimation of life and the longing to abandon earthly existence. In Bas Jan Ader’s series of falling films, for example, he lets himself fall out of a tree or from the roof of his house in Claremont, California, or rides his bike into an Amsterdam canal. What first looks like slapstick is, according to René Daalder, part of a much larger agenda that was inspired by Ader’s study of philosophers such as Kant and Wittgenstein and artists to whom he refers in his work such as Caspar David Friedrich and Piet Mondriaan, who were preoccupied with that which lies beyond the ‘outermost skin of matter’. The gravity that influences every aspect of our lives on earth continually reminds us – more strongly than any other natural force – that there is more in the world than meets the eye.

The idea for the exhibition is based on the concept by René Daalder on ‘Gravity as a Medium in the Arts’, which he first explored in an article for Contemporary Magazine in February 2004. The Dutch-born filmmaker René Daalder, who now lives in Los Angeles, is a writer and director of six motion pictures and many documentaries. Daalder is also an expert on computer animation and effects. More information about René Daalder can be found at www.renedaalder.com.


EXTRA 1 December
Preceding the opening, a sneak preview will be shown at 5 p.m. of Here is always somewhere else, 2005, by René Daalder, on the life and work of Bas Jan Ader. With the collaboration of Tacita Dean, Rodney Graham, Marcel Broodthaers, Ger van Elk, Charles Ray, Chris Burden, Pipilotti Rist and others.

EXTRA 20 December
8 p.m. Screening of ‘A bout de souffle’ (1959) by Jean-Luc Godard.
Lecture by Marion van Wijk and Koos Dalstra. An explanation of chapter 8, ‘Falling’, from Ocean Wave, the biography of Bas Jan Ader, to be published by Artimo in mid-March.


© Joel Tauber
The Gravity of Art