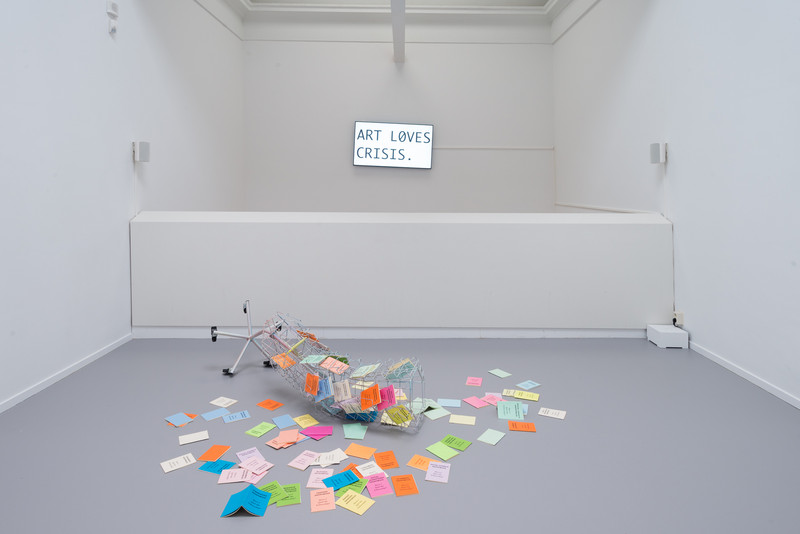 The participants of the Curatorial Programme 2015-16 of de Appel arts centre propose in Untitled (two takes on crisis) two projects, You Must Make Your Death Public and Rien ne va plus? Faites vos jeux! which investigate how artists and curators reflect upon the notion of crisis. Both collect a variety of thoughts, strategies and counter-moves used in situations of a decisive nature.

Point of departure is a curatorial reflection upon institutions in crisis, starting from recent developments at de Appel arts centre. Institutions can be primarily understood as social entities, wherein a state of crisis often is an ever-recurring condition or a hidden reality. The two projects embody two distinct voices, which speak up in this matter. One is related to art works and artistic energies that fathom and face the crisis in an expanded context; the other is proposing a range of strategies out of the critical experience, resorting to therapeutic and educational journeys.

You Must Make Your Death Public is an introspective project, which seeks to probe the notion of crisis in contemporary society and its institutions. With its inception in a specific moment of crisis, the project attempts to analyse power relations through an interrogation of the peculiar formulation of aesthetics, language and location. It will explore the ways in which the meanings, values and behaviours that a society produces and promotes through its cultural forms and practices, almost always privilege some groups at the expense of others.
In this way the project will seek to reach out to communities (for example, undocumented migrant workers through the contribution of Irwan Ahmett & Tita Salina) for whom it is important to establish the sites of the so-called crisis. To tackle this issue, the project attempts to formulate co-speaking processes using different artistic practices, research trajectories and political positions, and will manifest in various formats including an exhibition, a publication and a series of public engagements.

Publication You Must Make Your Death Public

Rien ne va plus? Faites vos jeux! is an exhibition, series of public programs, and a publication which inquire into a variety of ways of relating to the institutions of public life collapsing under the pressure of contemporary crises. Having followed the curatorial programme under the ongoing state of institutional emergency, the project conceives of a space for “critique as proposition” (M. Hlavajova).

The title, by referring to expressions commonly used in the casino and by reversing their usual order, underlines how from a situation where nothing seems to go anymore (Rien ne va plus), one can still make their own move (Faites vos jeux).

Meaning that both artistic and curatorial contributions aim to offer intellectual and practical strategies to deal with crisis. Within a theoretical framework consisting of five possible reactions formulated by the curators (Reflective Nostalgia, Inner Emigration, Fictional Reality, Permanent Reconstruction, and Liquid Status), artists will suggest viable answers to face or escape the crisis, exploring and also questioning the therapeutic potential of artistic practice. Additionally, an informal network of practicing curators and artists, concerned with questions of the curatorial, will draft and exercise scenarios of strategy-lessons in complementary formats.

Lastly, a publication will serve as a manual collecting the artistic and curatorial strategies but also discussing their underlying hypothetical approaches.

As part of the public programme Pedro Reyes will hold a workshop that aims to carve out the invisible geometry of personal relationships and outline possibilities of overcoming crisis, while taking care of a delicate young apple tree shoot.

About the Curatorial Programme:
Initiated in 1994 as an in-house international training trajectory for young curators, the Curatorial Programme of de Appel arts centre offers its participants hands-on experiences and skills for a further development of their professional career. Each year the programme culminates in the collective conception of a final project at de Appel arts centre. The Curatorial Programme 2015-16 are: Laura Amann (Austria, 1986), Kateryna Filyuk (Ukraine, 1986), Jussi Koitela (Finland, 1981), Renée Mboya (Kenya, 1986), Asep Topan (Indonesia, 1989) and Alessandra Troncone (Italy, 1984).

With thanks to Ammodo and the Finnish Cultural Institute for the Benelux
www.deappel.nl